Julius Ramsay’s “Midnighters” opens with a relatable nightmare. A great number of us have gotten behind the wheel after a glass of wine or two too many and a great number of us have been distracted while driving. Couple Lindsey (Alex Essoe of “Starry Eyes") and Jeff (Dylan McTee) are an average duo out on New Years Eve. They didn’t over-do it. Neither is dangerously drunk. And they didn’t have the best time. It was a work event for Lindsey, and neither of them particularly like her co-workers. In fact, we meet Jeff outside, smoking and waiting to go. It’s a subtle beat but an important one in that it sets him apart and hints at a bit of tension. “Midnighters” is full of these subtle, smart choices by its production team and cast. It’s a smart thriller that features a few truly dumb decisions.

So what happens on the way home for Lindsey and Jeff? While Jeff is trying to get a little playful with his hand on Lindsey’s thigh, he takes his eyes off the road. Before he can even really tell what’s happening, they plow into someone walking in the road. At first, Lindsey and Jeff make the right decisions. They try to call 911, but they can’t get a signal. They throw the battered, but breathing, man in the back seat and head to the hospital themselves. And then, while Lindsey is driving, their victim stops breathing—at least Jeff thinks/says he stops breathing. Now what? If they go to the hospital with a body, they’ll get breathalyzed. They agree to take the body home for a couple hours and sober up, and then take him in like it just happened. To say this does not go as planned would be an understatement.

Of course, “Midnighters” comes from the familiar template of a thriller built on an increasingly dangerous series of bad decisions, but writer Alston Ramsay and the film’s tight cast make them work. It’s basically a four-character piece—our couple, her sister Hannah (Perla Haney-Jardine), and a mystery man named Smith (Ward Horton)—and I’ve always had a soft spot for thrillers that can maintain tension with limited speaking roles in a limited space. The Ramsays wisely don’t overreach their budget or storytelling needs, locking us in a house that’s feeling increasingly dangerous for most of the running time (and doing so during the day, for the record, making that placeholder title even more annoying).

One of the things that elevates “Midnighters” above similar VOD fare is the subtle little digs that hint at the discord between Lindsey and Jeff that will ultimately destroy them. One of her first reactions after the accident is “What did you do?!?!” and Essoe is fantastic at balancing Lindsey’s fear and the sense that she’s not going to take the blame for Jeff’s stupidity or malice. Ramsay the director paces “Midnighters” well, and that’s really half the battle in these “thrillers of bad decisions.” Just keep it moving quickly enough to allow the suspension of disbelief to stay elevated. And he does that for most of the running time, with only one decision in the middle of the film that I openly questioned. Most of these movies reach eyeroll territory as we don’t believe what characters do and say, but I was with “Midnighters” from its opening scene to its grisly end. It's a notable genre surprise early in the year. Let’s hope we get a few more. 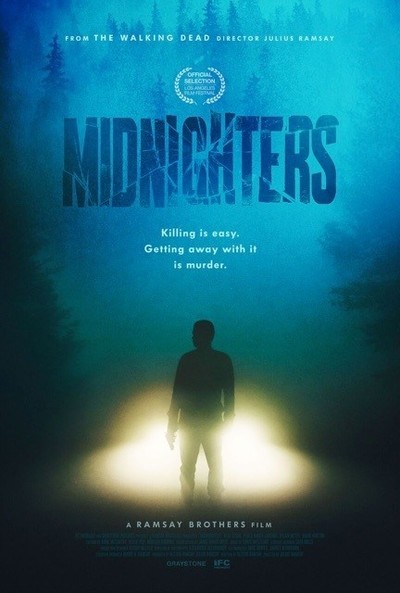