"Midnight Cowboy" comes heartbreakingly close to being the movie we want it to be. The performances have a flat, painful accuracy. The world of Times Square, a world of people without hope and esteem, seems terribly real. Here is America's underbelly and it even smells that way. And seeing these things and reaching to them, we are ready to praise the movie where we found them. And cannot.

There has been a failure somewhere in the director's faith in his materials. John Schlesinger has not been brave enough to tell his story and draw his characters with the simplicity they require. He has taken these magnificent performances, and his own careful perception of American society, and dropped them into an offensively trendy, gimmick-ridden, tarted-up, vulgar exercise in fashionable cinema. Trying to get the good out of "Midnight Cowboy" is like looking at a great painting through six inches of Jell-O. It is there -- the greatness is there -- but unworthy hands have meddled with it almost beyond repair.

They exist apart from the movie, outside of it. Their real lives have nothing to do with Andy Warhol parties, or escort services, or hard Park Avenue dames. And who can really believe they would ever find themselves on that bus to Florida? It is cruel to take the reality of Times Square -- the existence of the real people like Ratso and Joe -- and tell their story as if it were a soap opera. The form that has been imposed on this story simply will not fit.

That would not be an objection under ordinary circumstances. If "Midnight Cowboy" were not potentialy such a good movie, we would care a great deal less. But this movie gives us so much that we want it all. We have been to hundreds of movies, and we hardly care anymore that most of them are lousy. We understand that. What is unbearable is a movie that could have been great, that could have touched us, and lost courage.

The basis of "Midnight Cowboy" is one of the essential American myths: The eager youth comes from the country to the city, and his simplicity and freshness are ground up in the urban jungle. Dreiser wrote this story, and Sherwood Anderson, and it is still a good story because it tells what happens every day. It is an entry in the genre "the education of ..." And you can fill in Tom Jones or Hyman Kaplan, Eugene Gant or Joe Buck. What matters is how well the education is perceived. What happens to the hero? What experiences shape his new life and from his idea of himself?

The basic thing that happens to Joe Buck is that he meets Ratso, a person entirely outside his experience. Ratso is well named. Like a rat, he makes his own way in the city, hated, asking no favors, living the life he knows. But Ratso has a measure of humanity. So does Joe Buck. They come together because there is no other way to turn. "Midnight Cowboy" should have been about their mutual self-discovery; about the process that took place as they learned to know each other.

Instead, it reaches outside this relationship for a string of melodramatic scenes that will not do. The most offensive, of course, is the Warhol-type psychedelic party. This party has been done and overdone in dozens of films. It provides an excuse for the cameraman to exercise his skill and for the editor to give up a few easy glimpses of skin. Insofar as it is not a ciche, it is a handy way to sneak in one more rock song for the sound-track album. In the real world, let's face it, there is almost no chance of Joe and Ratso being invited to such a party (even assuming they were still being given anywhere outside of movies). More likely the rich girl (so finely played by Brenda Vaccaro) would pick up Joe or someone like him on 42nd St.

The other two offensive episodes involved the religious fanatic with his electric Christ, and the shy, middled-aged homosexual from Chicago. The first scene might just barely have been pulled off, if only that Christ hadn't started blinking like a carlot Santa Claus. The second scene went wrong when Joe jammed the telephone in the guy's mouth and the false teeth went flying. We already knew Joe well enough to know he simply wouldn't do that; why didn't Schlesinger know him as well?

One scene that did work -- that painful encounter in the dark movie theater with the kid with hornrims -- was seriously damaged by Schlesinger's flashbacks. The flashbacks, indeed, are a serious weakness in the movie. We are never quite sure what went on with the girl in Texas, or what Joe's grandmother was up to, but that doesn't matter. We get the general idea. But the trouble is, experiences like those in Joe's background should (in the convention of Freudian shorthand) have produced a masochistic, impotent figure. They don't fit into Joe Buck as we see him.

So on top of this sloppy psychology, we get the gimmicky photography, the obigatory Warhol party, and of course the pop songs. How long will it be before we recover from "The Graduate" and can make a movie without half a dozen soul-searching pseudo-significant ballads? When we dump the songs, we'll also be able to get rid of all those scenes of riding on buses, walking the rainy streets, hanging around, etc., that are necessary while the songs are being sung.

All of these criticisms exist entirely apart from the performances of Dustin Hoffman and Jon Voight. It is a tribute to them, and to the core of honesty in the screenplay, that Ratso and Joe Buck emerge so unforgettably drawn. But the movie itself doesn't hold up. 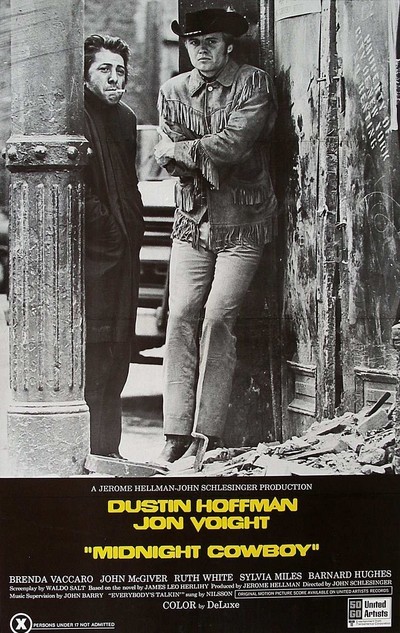