“Miami Rhapsody" has been dismissed in some quarters as an imitation Woody Allen movie, but since the imitation and the movie are both so entertaining, I don't see what the problem is. Allen himself has made unabashed pastiches in the style of Fellini ("Stardust Memories"), Bergman ("Interiors") and German Expressionism ("Shadows and Fog"),and now here is David Frankel's take on Allen's comedies about the moral qualms of the affluent.

Just to make clear he knows exactly what he's doing, Frankel stars Mia Farrow, Allen's former muse, in a key role. And he opens the picture with a close-up of another character delivering a monologue to her psychiatrist. This is Woodyland, all right, and my guess is that if this were a Woody Allen film, it would be reviewed as a pretty good one. Not great, but pretty good.

The movie stars Sarah Jessica Parker as Gwyn, the middle child of the Marcus family, affluent Jewish Miamians. She is engaged to be married to Matt (Gil Bellows), a zoologist who dreams of living in the rain forest, presumably with Gwyn, and studying the intimate lives of simians. But before that can happen, Gwyn finds herself doing a little psychological zoology involving the intimate lives of her family.

At her sister's wedding, she's told by her father, Vic (Paul Mazursky), that he suspects her mother, Nina (Farrow), is having an affair. This turns out to be quite true; Nina confesses to having fallen for Tony (Antonio Banderas), the handsome Latin-American male nurse who is caring for her mother in a nursing home.

Gwyn has always considered her parents' marriage perfect, and her faith in the institution of marriage is shaken by Nina's secret, which turns out to be the tip of the iceberg.

In quick succession, Gwyn discovers that Vic himself is having an affair, with his travel agent. That her brother Jordan (Kevin Pollak) is cheating with his partner's wife (Naomi Campbell).

That even her newly married sister Leslie (Carla Gugino), bored with her football-hero husband and appalled by his stinginess, is seeing an old boyfriend.

How can it be possible, Gwyn wonders, for her to commit to an institution that everyone around her is undermining? And . . . could it just possibly be true that the handsome Tony would rather date Gwyn than her mother? I realize this plot synopsis makes "Miami Rhapsody" sound like a screwball comedy with couples popping in and out of bed.

What is rather impressive is the way Frankel, who wrote as well as directed, is able to bring levels of truth, poignancy and pain to what begins as a fairly mechanical plot. He does this by making most of the characters self-aware; if they're doing wrong, to some degree they realize that, and learn from it. And in Gwyn's grandmother, a Holocaust survivor who never speaks but yet somehow casts rays of cheerfulness and love on all about her, he provides a moral center: a person whose example causes most of the characters to think twice before descending into heedless selfishness.

Of course, probably not all of the marriages should be saved. The football star (Bo Eason), who seems like a nice guy until he gets married, turns out to be so self-absorbed he doesn't see why any of his money should be spent by his wife. We understand why she strays.

But the other adulterers really belong with their original spouses, and with the moral neatness of a comedy by Shakespeare, Frankel manages to restore order and balance by the end.

Frankel's dialogue is smart and topical, although it aims at a slightly lower intellectual level than Allen's screenplays, maybe because the movie is set in Miami, where people are more likely to discuss politics than philosophy. "You kids tend to put me up on a pedestal," Farrow complains to Parker, who replies, "You lowered it the year you voted for Bush." Miami itself is almost one of the characters in the film.

Jack Wallner's cinematography uses its tropical colors and Art Deco architecture to create a pulsing backdrop, and there's the sense that the characters are just a little warmer, faster and more lustful here than they might be up north.

Parker has a line that could have been spoken by the Allen of "Annie Hall": "I look at marriage the same way I look at Miami: It's hot and stormy and sometimes a little dangerous - but if it's so awful, then why is there so much traffic?" 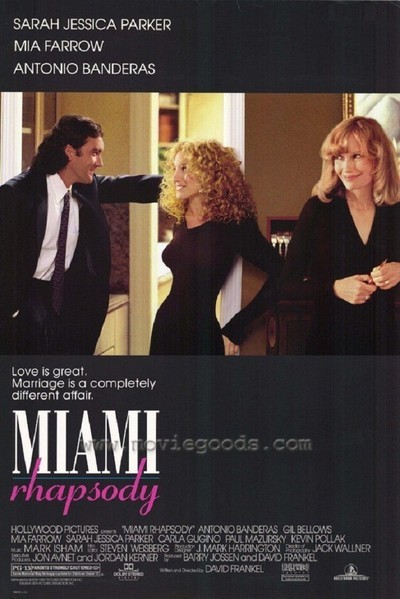