Metallica: Through the Never

Metallica doesn't do anything small. Their songs are relentless assaults of sound, sometimes topping the 8 or 9-minute mark. It's not a surprise then that "Metallica: Through the Never," their 3-D IMAX concert film/apocalyptic Mad Max story, directed by Nimród Antal, is a gigantic spectacle, a virtual-reality experience that is both ridiculous and sublime, sometimes in the same moment.

The band members, lead singer/guitarist James Hetfield, lead guitarist Kirk Hammett, drummer Lars Ulrich, and bassist Robert Trujillo, came up with the concept, giving it a personal stamp which longtime Metallica fans will recognize. The Metallica concert in the film features laser beams, a Tesla coil shooting actual lightning bolts through the air, a gigantic statue of Lady Justice which crumbles to bits around the band members, white crosses emerging from beneath the stage floor, dry ice…the only thing missing from that arena stage is an 18-inch tall Stone Henge. Meanwhile, there's a fictional storyline that runs alongside the concert: a young roadie named Trip (Dane DeHaan) is sent on an important mission to retrieve a bag needed by the band. "Metallica: Through the Never" moves back and forth, from concert to Trip and back.

The concert was filmed at Rexall Place, an arena in Edmonton, Alberta. The stage is huge and cross-shaped, with Lars Ulrich's drum set placed in the transept. The three other guys wander around freely, sometimes meeting up, but mostly facing out, communicating with the masses of gyrating fans. Twenty-four cameras were used, and cinematographer Gyula Pados brings us in close enough that we can almost feel the sweat flying off of Trujillo's long hair as he spins his head, and also pulls us back, way back, to give a sense of the sheer scope of the production and the audience. The fans are packed in tight, pushing against the barriers near the stage, pulsing their arms in the air. The effect of all of this is so visceral and immediate that it really is the next best thing to being there.

Cutting away from the concert to follow Trip's attempt to retrieve the missing bag is a risky device and doesn't work initially, because the concert is so engrossing you resent being made to leave it. But it grew on me as the film progressed, and ended up having a startlingly emotional resonance by the closing shots of the film. Here's what happens. Trip takes off in a battered van to go get this missing bag. Civilization appears to have broken down. Cars are on fire. Riot police and mobs face off. People are strung up from lampposts and dangle in the wind. (There's a reason "Metallica: Through the Never" is rated R.) Trip finds himself singled out by the mob. A literal horseman of the Apocalypse, wielding a gigantic mallet and wearing a gas mask, gallops after him. Trip is beaten up, set on fire, dragged behind a horse, chased through dark alleys. What is in the bag that Metallica needs? Well, if you've seen your Hitchcock, then you know that doesn't matter.

All of these scenes are tied thematically to Metallica's concert song list, which span the 30 years of Metallica's career, from early songs like "Creeping Death," to later songs like "Cyanide." All the major hits are covered: "Master of Puppets," "One," "The Memory Remains," "Enter Sandman," "And Justice For All," "Battery," "Nothing Else Matters." Metallica's music is not light. They are not carefree guys. Even their ballads are gloomy. Trip's struggle to survive in a violent dystopian world is reflective not only of Metallica's most common themes, but also echoes what the music actually sounds like. Metallica's music is fast, aggressive, and demanding. As macho as Metallica's collective stage presence is, what they tap into is a very dark place where they are alone, helpless, and isolated. Music critic Steve Huey once observed that "in one way or another, nearly every song on 'Master of Puppets' deals with the fear of powerlessness." That's where the rage comes from.

Trip, as played by Dane DeHaan, is a skinny kid in black jeans and a hoodie. He is overwhelmed by forces larger than him. He is not physically strong. He is an outcast. James Hetfield may be a tattooed rock god, wearing all black and a bullet belt, stalking around on a stage the size of St. John the Divine like he owns the joint, but he still identifies with guys like Trip. He identifies with the outcasts, the scared kids of the world ("Enter Sandman." their most famous song, features a child's voice praying), and Trip is the stand-in for all kids who feel like they don't fit in, who are scared and feel powerless, who find strength in music like Metallica's. That's when the device stopped feeling like a device and felt like an expression of the band's identification with its own fan base, with the guys they used to be.

It was 1983 when Metallica's first album came out, a year where The Police and Michael Jackson dominated the pop charts. Heavy metal fans were part of a vibrant underground scene, where bootleg cassette tapes were passed around. Metallica are Rock and Roll Hall of Famers now. Their actions (and albums) have not always pleased their hard-core fan base. Remember when they sued Napster? Remember "Load," their sixth album, seen by many fans as a betrayal of what the band was all about? Some of the oldest fans think Metallica sold out with what is known as "the black album." These things are still being argued about on heavy metal websites and fan forums. And then of course, they all went into therapy in order to heal the rifts in their relationships, a process documented in the fascinating 2004 documentary "Some Kind of Monster." The album that resulted from that therapy process, "St. Anger," received mixed reviews but still sold millions of copies. You can see that up-and-down journey in the concert itself, as technical snafus threaten to derail the whole thing, forcing the band to go back to basics.

Some of the best moments in the film involve footage of the concert audience. There is one audience member I keep remembering, and he appears for only a second. He was pushed up against the barrier. He had his shirt off, like a lot of the guys did, and his arms were in the air, eyes closed, lost to everything else but that immediate moment. There are millions more of him around the world. And there were thousands more in that arena. The sound of the audience singing along is so powerful it sounds like a political rally about to turn violent. Even James Hetfield at one point seems a bit taken aback at the collective sound of thousands of people singing his lyrics. At the end of the film, during the credits, the words "To the Metallica Family of Fans" scroll by on the screen. "Metallica: Through the Never" is a vehicle that could reach a new generation of fans, who wouldn't even know what the term "bootleg cassette tape" meant, but know great music when they hear it. 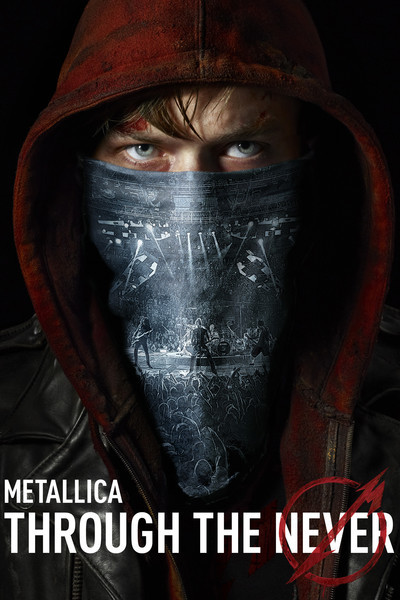 Metallica Through the Never (2013)

James Hetfield as Himself

Lars Ulrich as Himself

Kirk Hammett as Himself