Halfway through Zachary Trietz’s “Men Go to Battle,” any viewer who went into the film due to the promise of its title might well be entitled to sigh, “If only.”

A more accurate title for the low-budget indie Civil War drama would be, “Man (Sing.) Goes to Battle. Eventually. Sort of. For a While. Then Leaves. Other Man Stays Home.”

But to avoid that marquee-buster, here’s the concise version: “Mumblecore Civil War.”

Treitz’s film might not seek out the association with that de facto movement, but it’s inevitable given their shared aesthetics and underlying artistic goals. Chief among those are the idea that story in the conventional sense isn’t an important asset; the real point is to make films that show “life as it really is” rather than as standard movies portray it.

That’s arguably a worthy enough starting point, but to convert it into something compelling, a film must find something engaging that substitutes for story—charming performances, witty defiance of viewer expectations and interesting narrative diversions are among the options—and it’s all got to be well-executed enough, even by fairly rough standards, to justify our attention. “Men Go to Battle” hits neither mark.

In regards to execution, its failings are amplified—and to an extent perhaps, caused—by its being a period film. The notable Mumblecore movies, of course, were contemporary tales shot in real locations, often the apartments of the actors. The people onscreen were often playing versions of themselves; they spoke and behaved as they did in real life. There was no need to conjure a special language or mode of behavior for them.

A period film is different, but Treitz seems not to know that, or not to have the chops to deliver what’s needed—most likely the latter. In the film’s first scene, we’re on a farm in Kentucky in 1861 and two men are speaking with each other. From their initial words on, the actors sound like contemporary guys mouthing dialogue written by someone trying to create something that sounds vaguely 19th-centuryish but coming up short.

There are other movies that deal with rough-hewn characters caught up in the Civil War’s fringe areas, and notable ones such as Robert Benton’s “Bad Company,” Robby Henson’s little-known but terrific “Pharaoh’s Army,” and Ang Lee’s “Ride With the Devil” (scripted by James Schamus from Daniel Woodrell’s novel) all begin with finely tuned scripts that, unlike the one by Treitz and Kate Lyn Sheil, create persuasive, idiomatic versions of a bygone era’s modes of speech.

There’s artifice aplenty in this kind of writing, of course, and Mumblecore tries to avoid overt artifice. But what’s here is artificial in the same ways those film’s scripts are; it’s just artifice that inadvertently calls attention to its lack of linguistic skill.

The historical setting also accentuates the narrative’s lacks. The tale starts off focusing on two brothers, foursquare Henry (Timothy Morton) and gangly Francis (David Maloney), illiterate but solid-seeming farmers who have a testy, vacillating relationship during the war’s early days. Kentucky is a border state where some side with the North, some with the South, but we hear very little about the conflict for the story’s first third. Instead, we witness the day to day lives of the two brothers, their problems with farming and credit and their occasional forays in search of female company among the town’s better-off families.

Eventually Henry disappears and it emerges he’s gone off to fight for the Union. He and Francis, who stayed home, begin writing letters, aided by friends. As a soldier, Henry sees some action, and this is where the film’s naturalistic aesthetic is really revealed as a self-deluding fraud. The movie wants to show us “life as it is”? Well, it certainly doesn’t show us war as it is. In one scene, Henry’s company is seen going into battle, and the scene is played without synchronous sound, much less the godawful cacophony than it would have been in real life. (The opening scenes of “Free State of Jones” offer a far more vivid and believable account of Civil War combat.)

War is not hell in “Men Go to Battle.” It’s barely anything, beyond a backdrop behind the noodlings of the characters who wander through or near it. Needless to say, this wastes a great deal of very rich material, denying viewers vivid and authentic accounts not only of the experience of soldiers in this theater of the war, but also of the heated political passions and fiery disagreements that drove families and communities apart in this tortured part of the U.S. Indeed, seldom has a Civil War film made so little of its actual historical context.

The movie’s other area of failing is its acting. The performers here, especially leads Morton and Maloney, are certainly game. But playing period characters requires not just a smart script and expert direction but a certain level of skill going in. The acting here, like too much of the film, ends up registering as unfortunately amateurish. 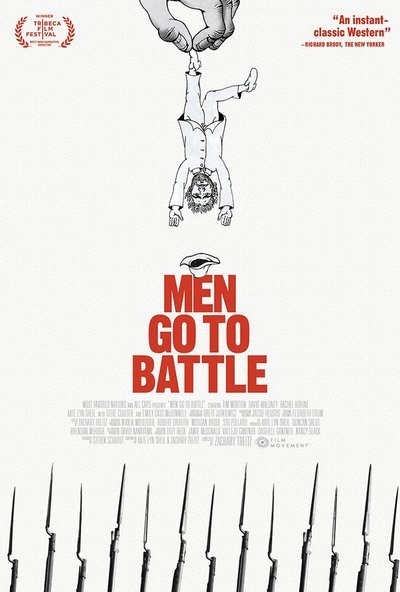