Gary Ross’ “Free State of Jones” is based on one of the most fascinating true stories of the Civil War. It tells of a rebellion against the Confederacy led by an angry farmer named Newton Knight, whose ragtag army of poor whites and escaped slaves declared a portion of southeastern Mississippi, including Jones County, independent and loyal to the Union. As inherently astonishing and powerful as this little-known episode is, it has not been well-served by Ross’ lumpy, ill-conceived script, which ends up wasting Matthew McConaughey’s terrific lead performance and other strong acting contributions.

The film starts out with a searing reminder of the horrors of the only war fought on American soil. We’re on a battlefield with straight lines of Confederate soldiers as they march resolutely toward the enemy and encounter blistering fire that fells one soldier after another. An orderly who takes the wounded to a field hospital, Knight (McConaughey) gets an eyeful of the blood and agony that battle produces. Clearly, he’s already disgusted by the suffering he sees, as well as being angered by a new law that exempts men who own more than 20 slaves from military service. As one of his disaffected fellow soldiers says, it’s “a rich man’s war but a poor man’s fight.”

When a teenage kinsman shows up to fight and is soon killed, Knight deserts from his company to take the boy’s body home, thereby putting himself at risk for capture and execution. On home ground, he’s among people who’ve been victimized by the Confederacy’s “tax in kind” law, which allows the South’s armies to requisition goods, food and livestock from civilians, who are often left starving and destitute as a result. He also finds his wife Serena (Keri Russell) tending their son who is terribly ill. No doctor is available, but a female slave from a nearby plantation named Rachel (Gugu Mbatha-Raw) applies herbal remedies that lift the boy’s fever.

Eventually, unable to hide at home, Knight escapes into the swamp, where he joins a small group of runaway slaves in an enclave that’s effectively impenetrable by outsiders. Before long, these fugitives are joined by others, both black and white. Though the film makes note of the racism that occasionally roils the makeshift community, the group’s desperate circumstances obviously dictate a modicum of solidarity.

While there’s some dramatic interest in this set-up to the main story, it’s a measure of the plodding nature of Ross’ screenplay that it takes a full hour before the film’s real action commences. That happens when the Confederate command becomes alarmed at the renegades Knight is leading and sends soldiers to deal with them. But Knight and company have assembled their own arsenal and are ready for battle. They fight and win. And keep winning, even staging a surprise attack on the Confederate forces at a funeral, where Knight pursues and kills the rebel commander (brilliantly played by Thomas Francis Murphy).

From there, Knight’s men manage to take over all or part of several counties and, after fending off the substantial Confederate forces sent to subdue them, declare a “Free State of Jones” under the stars and stripes. This is near the end of the war but, for reasons not explained, General Sherman declines to support them, so the period of self-government lasts until the Confederacy collapses and the union is restored.

That would make a good ending of the story, but it’s not what happens here. If the film’s first hour is needlessly slow and protracted, its last half-hour proves to be an unfocused patchwork of scenes that seem designed to prove only that Reconstruction was an even bigger drag than war. First, rebels like the local plantation owner pledge allegiance to the union, have their citizenships restored, and quickly move to deliver freed blacks into new forms of servitude, even as the Ku Klux Klan arises to keep them from voting. Newton joins his black comrades in resisting these moves, and meanwhile defies local mores by living with wife Serena and common-law wife Rachel, who both bear several children each for him. (Though the film doesn’t show it, the Knights’ unconventional lifestyle made them outcasts to both blacks and white.)

There’s worthwhile history here, to be sure, but some of it’s tedious while other parts are dubious (e.g., a title tells us that in 1875-76 federal forces were withdrawn from Mississippi even as “Klan activity was on the rise”; in reality, the Klan was effectively suppressed by actions the federal government took in the early 1870s). Eventually, the film’s story feels like it just peters out, without reaching any discernible dramatic or thematic point.

Another flaw in Ross’ screenplay is a subplot set during the Jim Crow era, several decades after the Civil War, when one of Knight’s male descendants is on trial for violating Mississippi’s anti-miscegenation laws by marrying a white woman (the prosecution charges he was descended from Rachel, which gives him enough black blood to qualify as black under the law). Though perhaps an interesting footnote to the main story, this digressive thread feels entirely unnecessary and dispensable.

If his screenwriting is problematic in ways large and small, Ross is on much more solid ground in the generally very fine work he gets from his cast. Long-haired and bearded, McConaughey makes Knight a man full of righteous fire, but also thoughtful and as restrained as circumstances allow. Russell gives Serena a flinty edge, while Mbatha-Raw imbues Rachel with both dignity and quiet resilience. Other stand-out performances come from Bill Tangradi as Confederate baddie Lt. Barbour and Mahershala Ali as Moses Washington, a former slave who becomes a political activist after the war. 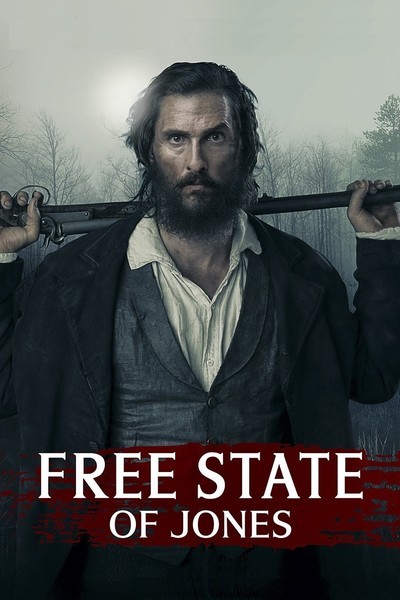