Forest Whitaker. Ebola. “Precious.” Arnold Schwarzenegger. “Diff’rent Strokes.” Bone Thugs-n-Harmony. “Planet of the Apes.” Kim Kardashian. These and many more are among the varied and random celebrities and pop-culture phenomena “Meet the Blacks” mentions during a running time that feels longer than its mere 90 minutes. Even by the standards of raunchy, comic spoofs, director and co-writer Deon Taylor’s film feels especially scattered. It’s as if he and co-writer Nicole DeMasi sat in a room, made a long list of movies, TV shows and famous people, then brought it to the set and had the actors come up with improvised bits in which they drop them here and there.

There also may have been some legitimate, relevant intent: “Our lead actress looks like Sofia Vergara—let’s just mention the name Sofia Vergara; that’ll be good for a laugh! We got Mike Tyson to do a cameo, and he’s willing to play a deranged party clown and wear a silly wig! But still, let’s do an ear-biting joke anyway. Just ‘cause, you know, it’s Mike Tyson.”

It very well might have gone down this way. You may find your mind wandering toward such theories during “Meet the Blacks,” given that the movie itself is so shaggy and shambling—and not in a pleasingly lived-in, Richard-Linklater kind of way. Just in a messy, incoherent way.

On its most basic level, “Meet the Blacks” is a spoof of “The Purge,” the 2013 thriller about a near-future America that’s peaceful and crime-free because one night a year, everyone is allowed to go on a murdering, thieving rampage of catharsis. But it puts a racial spin—supposedly for satirical purposes—on a movie that already was a satire of society’s ills. “Meet the Blacks” doesn’t have much to say, though, and doesn’t say it with much bite.

Mike Epps stars as Carl Black, who moves his family from a poor and violent section of Chicago to a wealthy enclave of Beverly Hills. (The gated subdivision is actually called Blanco Cielo, or White Sky.) Even the security guard at the front gate, who’s also black, doesn’t believe Carl belongs there. “I’m the new (n-word) who lives here!” Carl angrily insists. Others questioning his family’s presence include the overzealous neighborhood watch guy (an uncomfortable thing to joke about) and the super WASPs next door, Jim and Mary Smith. “It’s a little ironic that your name is Black,” says the chirpy Mary, in what becomes a repeated and not particularly funny joke.

But as it turns out, in addition to his wiring business, Carl can afford to live in a faux French Normandy McMansion because he stole a bunch of cash and weed from a drug dealer named Key Flo (Charlie Murphy). Then he dashed across the country with his family: his stereotypically sexy Latina wife, Lorena (Zulay Henao); sassy teenage daughter, Allie (Bresha Webb); quirky son, Carl Jr. (Alex Henderson); and creepy ex-con cousin, Cronut (Lil Duval). (An aside: Everyone refers to Carl Jr. throughout as Carl’s Jr., like the fast-food chain, which isn’t exactly hilarious the first time.)

The Blacks’ white, racist neighbors use the opportunity of the annual purge (which George Lopez kicks off on live television as a character named President El Bama) to force them to move out—or just kill them outright.

If this is going to be your premise—whites killing blacks out of a sense of snobbery and intolerance—your humor better be pretty sharp and sophisticated. Instead, “Meet the Blacks” (which wasn’t shown to critics before opening day) gives us fart jokes and tired pop-culture callbacks like: “Whatchu talkin’ ‘bout, Willis?”

It’s also sloppily made from a basic production standpoint: poorly lit and bafflingly edited with the uncomfortable vibe of awkward improv and spotty sound that renders several lines incomprehensible. (Although maybe that isn’t such a bad thing.) At the same time, “Meet the Blacks” takes some quick detours that are so strange, they’re almost fascinating. (The Tyson appearance is one of them.) And the movie as a whole is such an incompetent train wreck, you can’t look away, just to see how much worse it can get.

But every once in a while it seems to be trying, slightly, to make a vague point about racial prejudices and tensions. When a group of white neighbors stands outside the Blacks’ front door during the purge, wearing masks and carrying weapons, their leader goes on a vicious tirade about how unwelcome they are. But when he drops an n-bomb in the middle of it, everyone agrees he’s gone too far—even the guy who uttered the slur himself.

Mostly, though, “Meet the Blacks” is too scatterbrained to be so self-aware. 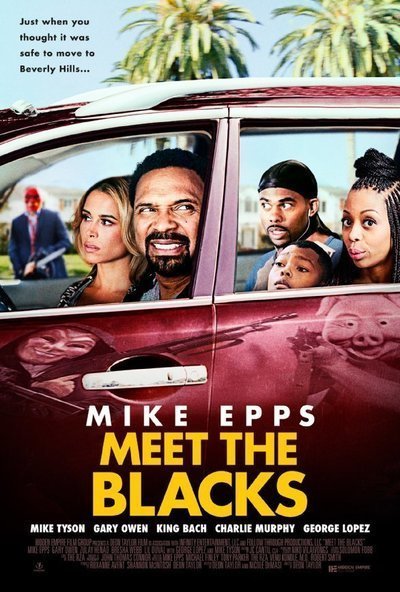 Rated R for pervasive language, some sexual material, violence and drug use.