Incantatory passages from Walt Whitman’s Leaves of Grass bookend the underwhelming music documentary “Meet Me in the Bathroom,” a short-sighted, soundbite-intensive remembrance of the New York City post-punk/indie pop rock scene of the early aughts. Mind you, featured bands like LCD Soundsystem, Interpol, The Strokes, and Yeah Yeah Yeahs are not even on break, let alone gone-gone. In fact, Interpol and Yeah Yeah Yeahs both released well-liked albums earlier this year, and LCD Soundsystem recently announced a block of 20 performances at Brooklyn Steel, frontman and former solo member James Murphy’s acoustically and geographically awkward music venue. As for New York City: it’s also still here, as the abovementioned Whitman quote suggests when it celebrates “Manhattan faces and eyes forever for me.”

“Meet Me in the Bathroom,” which was co-directed by Will Lovelace, and Dylan Southern, plays out like a memorial for post-9/11 NYC, as a scene and a vaguely defined moment in time. Based on Lizzy Goodman’s oral history-style book of interviews, “Meet Me in the Bathroom” shares a lot of the same problems as “Shut Up and Play the Hits,” co-directors Lovelace and Southern’s unfocused and ungenerous 2012 tribute to LCD frontman James Murphy and his band’s raucous 2011 “The Long Goodbye” show at Madison Square Garden. A lot of egocentric generalizations and weird omissions typify these two docs—and make their premature encomiums for recent history seem even more unnecessary. Remember when these bands were on the rise? Sure, but some of them—and us—are still enjoying great live music in New York City. What exactly are we mourning again?

For starters: New York City, after 9/11, gave rise to a number of bands, several of whom either knew each other or played in the same venues. It was a different time, of reinvention and creativity, and all the cool kids were starting bands. Some credit is given to The Strokes, led by writer/vocalist Julian Casablancas, and the galvanizing media frenzy that followed their early live performances, as well as their much-hyped first LP.

Other bands followed, and in “Meet Me in the Bathroom,” some of their members reminisce about coming together in New York City. They remember the electricity that lit up small local venues, a couple of which still exist. Also, the Lower East Side was a wasteland for reasons that aren’t discussed. “I remember thinking maybe New York isn't the kind of city anymore that produces iconic bands,” says The Moldy Peaches’ Adam Green. Later, a housing crisis, which followed the country’s 2008 recession, is presented as the end of an era; footage of 9/11 is also shown early on, to set a mood and establish the start of something.

For some musicians, playing live music in this presumed cultural dystopia was a strange, but liberating release. Yeah Yeah Yeahs’ Karen O seems to be talking about playing in a band when she talks about “Dirty Dancing”: "You go away for the summer with your family, you stumble into this underbelly ... this cool, sexy, like, you know ... scene." And for concertgoers, the feeling was apparently mutual. “You felt it,” says The Strokes’ Alex Hammond Jr. “The audience was excited that we existed.”

A flurry of quotes, often presented in unattributed voiceover narration, explain how quickly the scene grew. Some bands, like The Rapture, opted out for reasons of their own. Most didn’t understand or have a complete grasp on their fame. In all of this, New York City is presented as a homogeneous blend of cropped amateur concert footage; almost none of the people in the crowd get interviewed. “Meet Me in the Bathroom” is an impressionistic blur, more about what it felt like to be at the head of a scene than the actual scene’s character or identity.

A few isolated scenes convincingly speak for the movie’s primary talking head interviewees, like when we see Karen O performing the vocals of her band’s melancholic signature hit “Maps.” Other scenes illustrate how all over the place this authorized documentary tends to be, as when Murphy talks about forming a band, after being invited to perform in London. Okay, but wasn’t this movie about New York, and where did the Moldy Peaches go? Nothing is sensibly labeled in this movie, and everything is piled on top of everything else.

I remember seeing LCD Soundsystem and Interpol open for the Pixies at Jones Beach during that band’s 2004 reunion tour. Murphy seemed distressed, but Interpol was fine. The Pixies, with Kim Deal, were great, of course. Also, earlier this year, I saw Cannibal Corpse and Dinosaur Jr. play Brooklyn Steel (not on the same bill). The place was full up on both occasions, and both bands put on thrilling shows, too. Don’t send flowers, some of us never left. 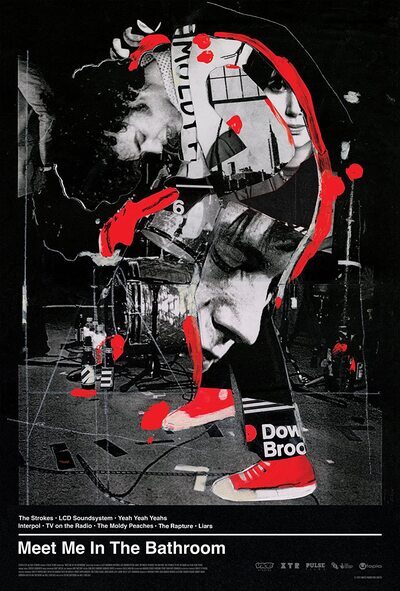