The thing about zombies is that they’re hard to kill. Sure, you shoot ‘em in the head and that’s supposed to do the trick. But when they’re rushing and gnashing and flailing at you—as modern-day zombies tend to do—it can be hard to concentrate and get a good shot. This is especially true when they’re coming at you en masse across a desolate wasteland, the kind you find in so many movies based on Young Adult novels.

Such is the sensation of watching “Maze Runner: The Death Cure,” the third and final film in the series based on James Dashner’s novels. It just… won’t … end. For better and for worse, it’s an overwhelming experience. And just when you think it’s over, there’s another coda, and then another. The music will swell to a crescendo, signaling our need to experience peak emotions and planned catharsis, and then there are more loose ends to be tied up, more overly explanatory narration to endure.

I mean, I get it. It takes a long time to find a death cure. But come on.

For a while, though, Wes Ball’s film moves really well. He’s directed all three installments in the franchise—including 2014’s “The Maze Runner” and the 2015 follow-up “The Maze Runner: The Scorch Trials”—and what separates his films from the overcrowded field of teen dystopian dramas is his visceral sense of space and energy.

Ball’s action sequences have a tangible, accessible quality about them, which is especially true in his doozy of an opening sequence: a 10-minute car chase/train robbery across the desert that’s got a grit, intensity and rough-hewn aesthetic reminiscent of “Mad Max: Fury Road.” And as is the case in all the “Maze Runner” movies—especially the original—the sound design is powerful and immersive. You certainly would never want to spend any time in the Glade, or the Scorch, or any of the adjacent, post-apocalyptic hellholes, but Ball’s films make you feel as if you’ve done just that.

Working from a script by returning writer T.S. Nowlin, he drops us right into the action—there’s no “Previously on `The Maze Runner …’”—so if you’ve forgotten this place and these characters, you may feel a little lost. Still, there’s no time to worry about that. Our hero, the obligatory YA Chosen One, Thomas (Dylan O’Brien), and his crew must free their friends from the clutches of the bad guys at WCKD. (With an acronym like that, what else could they be?)

A team of scientists led by the coolly minimalist Ava Paige (Patricia Clarkson) and a team of law enforcement agents led by the relentlessly evil Janson (Aidan Gillen) maintain control of the imposing Last City. (No, really, that’s what it’s called.) Simultaneously, they’re still rounding up all the remaining children and performing experiments on them to see who is immune and can provide a serum to cure this decimated world of the zombie plague.

The man at the center, O’Brien, remains hardworking and blandly handsome, but at least he’s got compelling figures surrounding him to help him sneak inside and burn it all down. They’re mostly character actors with intriguing screen presences and captivating faces: Rosa Salazar, Giancarlo Esposito, Barry Pepper, Thomas Brodie-Sangster, Ki Hong Lee, Dexter Darden and an almost unrecognizable Walton Goggins. They are overqualified for this noisy nonsense.

But they also bring an effortless multiculturalism to these movies that I’ve always appreciated, and they all get a moment to shine. That’s especially true when it comes to the strong women who play crucial roles in the “Maze Runner” universe, from the villainous Clarkson to the virtuous Salazar to Kaya Scodelario as Thomas’ would-be love interest, whose inner conflict leaves her facing tough decisions somewhere in the middle.

None of these characters or their stories is nearly as engaging as the movie’s many gonzo action sequences, though. Besides the one that opens the film with a bang, there’s a thrilling one toward the end involving a crane, a bus and a bunch of screaming kids that’s begging to be turned into a theme-park ride. In between are massive shootouts, elaborate hand-to-hand combat and death-defying leaps—both physically and of faith.

You may forget them all afterward in the blur of teen angst and annihilation that so many of these types of movies provide, but they’re fun while they last. If only they didn’t last so long. 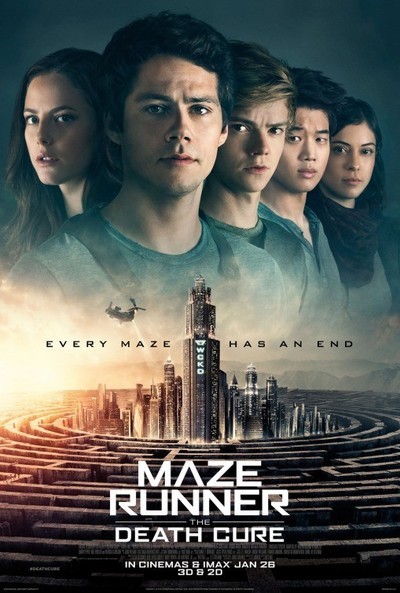 Rated PG-13 for intense sequences of sci-fi violence and action, language, and some thematic elements