In the opening moments of debuting writer/director Karen Cinorre’s daring yet indistinct “Mayday,” Ana (Grace Van Patten) braves the fiercest of storms: a depowering sense of invisibility. For starters, she’s stuck in a dead-end job in the bowels of a hotel’s kitchen, surrounded by haughty chefs and an abusive male boss—a man whose brand of cruelty behind fridge doors and stark bathrooms is always implied and sometimes shown, but you suspect he is even worse in the moments when no one is looking. So what could Ana do, if not dream big and often in her own head, both during the day and in her sleep? The problem is, those dreams sometimes prove to veer into nightmares for Ana, so lifelike in feeling that you know it’s just a matter of time for her to find herself in an actual one in the real world.

Then comes the ominous storm in “Mayday,” a single-minded yet deficient metaphysical thriller that overstates its feministic intentions at every turn like a desperate SOS. Immobilizing Ana’s workplace at once, the magical storm communicates with Ana via the kitchen’s massive stove. “Mary-Alpha-Yankee-Delta-Alpha-Mary,” reads a distant yet pleading female voice through it, drawing Ana deeper and deeper into the oven until she finds herself under turquoise waters near a tranquil island. This is an alternate world for Ana, one that seems to have erased most of her memory, and promises in return something of a sisterhood amid what looks like a troop of female soldiers resembling the Greek mythology sirens in spirit.

The transition to this new dimension is rather confusing, if not off-putting. From “The Wizard of Oz” to “Alice in Wonderland” and beyond, the references are there in abundance, but Cinorre trusts in their familiarity so much that she ditches notions like logical world-building (yes, there needs to be some coherent and consistent logic even in fantasy), throwing the audience inside a barely-realized novel reality. If you don’t ask too many questions and just go with the flow, you might have a decent time in this dimension. But for those who’ll want to connect some of the pieces without accepting the package, “Mayday” will be a frustrating struggle to endure.

If the costumes and gadgets are any clue, Ana’s journey takes her somewhere in the vicinity of WWII, amid a group of women warriors carrying out a mission in the midst of a ceaseless war. Among them are the leader Marsha (Mia Goth), a confident firecracker here that we first briefly meet in Ana’s previous world as a distressed bride with cold feet on her wedding day. Also in the troop are Havana Rose Liu’s Bea and Stephanie Sokolinski’s Gert as a pair of soldiers, as well as Juliette Lewis’ June—another character with a dual role. Slowly, the crew trains Ana as a sharpshooter, revealing the true nature of their existence. In unison, they pretend to be damsels in distress, luring male soldiers into their doom through cries for help. Little do these men know that deadly storms, false coordinates and an ill-fate await them.

If all of this sounds a little too on-the-nose—women battling male toxicity by any means necessary—well, that’s because it is. In that regard, the labored feminism of “Mayday” is less aligned with the complex and chaotically gut-wrenching powers of something like “Promising Young Woman” and more falls somewhere between the one-note workings of “Wonder Woman” and  “Assassination Nation.” Where Cinorre deserves credit is how boldly she envisions her visuals—the cinematography of “Mayday” is idyllic and the production design has the ring of a lived-in inventiveness—facets that prove Cinorre can see things clearly in her head, even if she doesn’t always place them on sound cinematic ground.

The filmmaker is also a master choreographer, with one lovely (but out of place) dance sequence and a companion underwater ballet proving her chops in visual orchestration, a necessary asset for any emerging filmmaker with an eye towards big-budget entertainment. But here, all of that means very little when the thematic substance isn’t present; when we aren’t given any well-realized emotional connection to the rightfully uprising women we follow, beyond the knowledge that they’ve been screwed over by patriarchy. Thankfully, Cinorre’s script liberates Ana from a dark fate she hadn’t bargained for. But despite a strong ensemble of actors and some impressive photography, “Mayday” drowns inside its own overambitions. 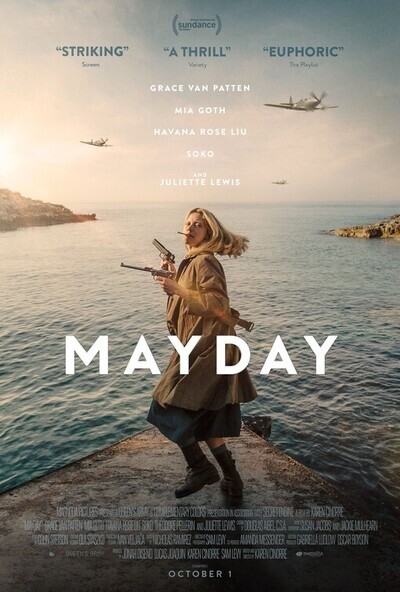