Maya Angelou and Still I Rise

A museum dedicated to the life of multi-hyphenate Maya Angelou would easily take up a city block, stand over ten stories tall and still feature rotating exhibits. But only in the lobby could one find a presentation of "Maya Angelou and Still I Rise," a new documentary about her creative genius. It's more of a fleeting introduction to her work. It's not a display that could stand on its own.

The film from co-directors Bob Hercules and Rita Coburn Whack does have the credit of being the first documentary made about Angelou's life. That sounds hard to believe at first, given Angelou's popularity and importance to American art, but also makes more sense when one considers that she also wrote seven autobiographies, along with numerous amounts of personal pieces. "Maya Angelou and Still I Rise" seeks to become the ultimate biography, while offering Angelou on camera, sharing her side of life stories that have become American lore in books like I Know Why the Caged Bird Sings.

Told in mostly chronological order, the documentary touches upon many chapters of Angelou’s life, starting with her upbringing in Stamps, Arkansas. While painting a picture of her upbringing in a poor, racist part of the country, it focuses on the growth of her voice, particularly when she was mute for a long time after a traumatic event. As a clue to her later brilliance without intense schooling, Angelou shares how she memorized full Shakespeare plays and read everything she could get her hands on during her formative years of silence. But as she says herself, “When I decided to speak, I had a lot to say.”

As the documentary charts the course of how her creative voice blossomed across mediums, Angelou is a fascinating open book, with her perspective coming in between smiles during a talking head interview. In an incredible journey, she started as a dancer then singer (known as Miss Calypso), and then went onto write songs and short stories, before getting to personally know the like of Langston Hughes or James Baldwin. She established an importance that spread to other areas, like political activism, which led her to friendships with Malcolm X and Dr. Martin Luther King, among many others. “Maya Angelou and Still I Rise” provides an in-depth picture of how prolific she was, the connections that led from one artistic opportunity to the next, and strong examples of how those she interacted with influenced her work. Hercules & Coburn’s film celebrates the importance of others on our creativity, and with a brilliant example; a woman who gave back a voice to numerous communities, while helping the life of a black woman become more visible on a cultural scale.

What the documentary adds to the Maya Angelou legacy can be found in various little gems, as it covers nearly every major form of artistry that she tackled, including songwriting (with Quincy Jones) and directing (the 1998 film “Down in the Delta”). Its talking head interviews are in particular a great find, including some beautiful words by Alfre Woodard and Cicely Tyson, or figures like President Bill Clinton, who speaks about why he chose her to write a poem (On the Pulse of Morning) for his presidential inauguration, which hadn’t happened since Robert Frost: “I knew she would make an impression. She was big and had the voice of God.”

In its management of footage featuring Angelou, from past and present, it does have some great moments. I loved seeing a clip of Angelou perform her poem “The Mask,” her reactions fluctuating between big laughs and vivid tears, the best way that piece could be presented. And there’s an unforgettable story from director John Singleton about the time Angelou was on set the set of 1993’s “Poetic Justice,” and had an emotional breakthrough with a wound-up young man on set, revealed to be Tupac.

As the story of Angelou exemplifies the power of expression, it only becomes increasingly apparent that this documentary has little artistry of its own. More in-depth history report than a piece of art, “Maya Angelou and Still I Rise” is a collection of fascinating information without style. It has serviceable standards, alternating between talking head interviews and stock footage, but the prowess of Angelou begs for some attitude itself, even if it requires a narrower or different focus. At least with its wide scope, “Maya Angelou and Still I Rise” shows that her time on Earth was about more than being an author, poet, civil rights activist, a mother, a dancer, a singer, a film director, producer, journalist and much more. Her life was poetry itself. 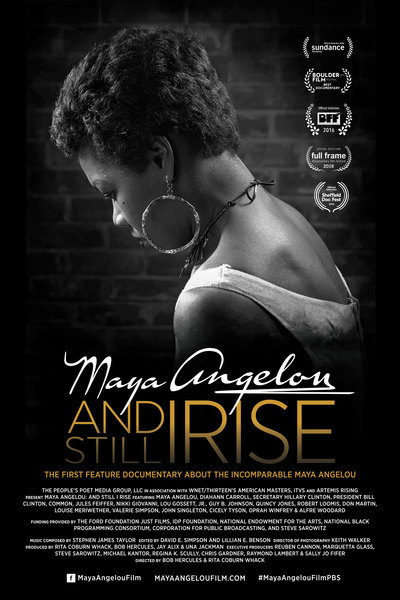