The middle half of "Master Z: Ip Man Legacy"—a new martial arts spin-off of the mega-popular action-biopic series—feels like a self-defense (and maybe a defense of the preceding film series). Which is striking, since the "Ip Man" movies—most of which star Donnie Yen as Man Ip, the formative Wing Chun instructor who went on to mentor Bruce Lee—are relatively un-ambitious action movies that pit civic-minded Ip against cartoonishly sadistic Brits and spineless mainland and/or Hong Kong collaborators. That kind of proudly nationalistic folk hero narrative isn't new to martial arts cinema (for proof, see the "Once Upon a Time in China" movies, or any film series that features the popular Chinese figurehead/martial artist Sai-Yuk Fong). But the "Ip Man" movies—especially the three titles that star Yen and are directed by Wilson Yip: "Ip Man," "Ip Man 2," and "Ip Man 3"—are very sturdy because they are all formulaic: they don't deliver more or less than what you might expect from an action franchise about a humble local hero who only fights badmen whenever he has to.

Thankfully, legendary fight choreographer and sometimes director Woo-Ping Yuen ("Crouching Tiger, Hidden Dragon: Sword of Destiny," "Iron Monkey")—adapting a script by Chan Tai Lee and Edmond Wong—have delivered a movie that (sometimes) spills out of its predecessors' narrative mold. Their movie is about another shy, but virtuosic fighter: Tin Chi Teung (Max Zhang), a single father who has given up martial arts after losing a private fight/match with Ip. Unfortunately for Cheung, the local Triad gangs are going through a crisis of leadership: tough, but fair reformed criminal Ngan Kwan Tso (Michelle Yeoh) wants to become a legitimate businesswoman while her hothead brother Sai Kit (Kevin Cheng) wants to sell drugs. And the occupying Brits, represented by evil crime boss Owen Davidson (Dave Bautista), have the meek local cops under their thumb. This cultural sea change prompt some unusual introspection from Teung, a normally impulsive character who now wants to retreat and live "a simple life." In that sense, "Master Z" is a more thoughtful (and exciting) spin on a predictable story: sullen hero gets mojo back, realizes his time isn't over yet.

You might think you know how the story of "Master Z: Ip Man Legacy" goes (and you probably do, to some extent). But you probably haven't seen it told with such confidence or perspective, not in a while anyway. Filmed on squeaky-clean, brightly-colored studio sets—lots of yellows, greens, and reds—Teung's story takes place in a glaringly artificial dream-world version of Hong Kong around 1959. That feeling of surreality only increases after Teung is forced (by gang-related violence) to move to the neon-lit Bar Street commercial district. When Teung and his fellow martial artists fight, they literally fly, as we see in a characteristically thrilling scene where Teung chases a bunch of acrobatic heavies up and around a series of building scaffolds and neon signs. If nothing else, these displays of physics-defying wire-fu send a clear message: "Master Z" is about as realistic and exuberant—and maybe as well-choreographed—as a Busby Berkeley musical.

This glaringly revisionist take on history isn't really new to the "Ip Man" series. The three Yen/Yip "Ip Man" movies all feature admirable (and sometimes thrilling) wire-fu fight choreography thanks in no small part to action director Sammo Hung (who worked on "Ip Man" and "Ip Man 2"). But Yuen and his team—uncredited in the movie's press notes—deliver superior, joyfully over-the-top action scenes, all of which are governed by the loosey-goosey rules of cartoon physics. In one scene, a full glass of whiskey flies up and around the hands and arms of Yeoh, Zhang, and their respective stunt doubles. In another scene, Teung nimbly twirls his young son around as if the kid were a Vaudeville cane or a cardboard Subway ad. In another, Bautista physically beats an opponent's body like a paddleball, punching him with one gigantic hand and then using his other mitt to drag his sparring partner's limp body back for more punishment. These scenes show us the past as we want to remember it: big, bright, superhuman. And let's face it: that's probably what you came to see if you bought a ticket for a movie with "Ip Man" in the title. You (and me) want to hear Teung regain his mojo and growl, "I have come to beat you," before laying into Bautista's remorseless druglord ("Chinese don't have options," he grunts as he tucks into a fine piece of steak).

So really, what's great about "Master Z" isn't the way that its creators transcend their chosen formula, but rather how they perfect it. I was especially impressed by the way that co-writers Lee and Wong made virtually every character appear to be an extension of Teung's central dilemma: why does he, a man who's ashamed of his past, deserve a comeback? Because, at the end of the day, he's needed ... and because everybody else in this movie has a past. Some supporting characters use their pasts to justify committing crimes while others turn a blind eye and take care of themselves. Ultimately, we want to believe that Teung—and other unbelievable heroes like him—are capable of doing what many of us can't: get over ourselves and act selflessly on behalf of our neighbors, our community, our loved ones. If there must be more movies set in the "Ip Man"-iverse, I hope that they're as dazzling and righteous as "Master Z." 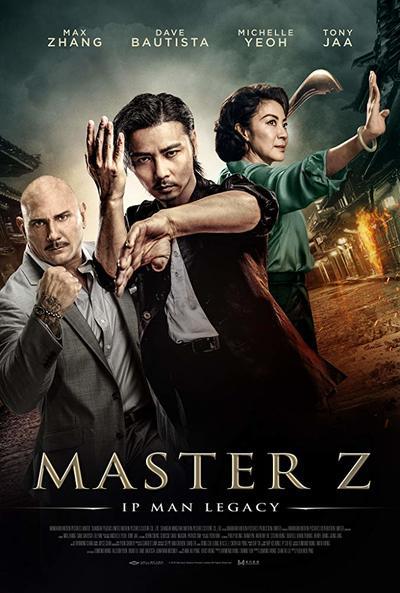 Tony Jaa as Sadi the warrior