In the first scene of the supernatural nautical thriller "Mary," directed by Michael Goi, with a script by Anthony Jaswinski, Sarah Greer (Emily Mortimer) sits in an interrogation room in the Coast Guard headquarters in Jacksonville, Florida. From what we can gather, she and her daughters have been rescued at sea after a mishap on their yacht, and she is now being held on suspicion of murder, sabotage, and a host of other crimes. She is traumatized and monotone, answering the questions of the investigator (Jennifer Esposito), who expresses understandable disbelief about Sarah's story. The boat did it? Sarah says, “Evil needs a body to exist. The body was that boat.” The line is worded so awkwardly it doesn't land at all. The script's overheated clunkers drain the terror—whatever terror exists—out of the film. (Screenwriter Anthony Jaswinski wrote the excellent "The Shallows," also featuring a terrifying ocean environment. There wasn't much dialogue in "The Shallows," it was all about its concept.) Unfortunately, "Mary"'s concept - and it's a good one! - doesn't blossom into the truly spooky, the truly eerie, even though it's given countless chances to do so.

The Greers, Sarah (Mortimer) and David (Gary Oldman), live in Florida with their two daughters, teenage Lindsey (Stefanie Scott) and child Mary (Chloe Perrin). One day, David goes to look at a yacht for sale. It's a beat-up and ominous-looking vessel, and something strange happens to David as he wanders over the deck. The salesman's voice cajoles him offscreen, and the creepy stone masthead—a woman with bared breasts and open staring eyeballs—seems to draw David to her. We know this because of all the tilted camera angles. Sarah is annoyed that David bought the boat without checking with her, but his enthusiasm sweeps her away. They'll fix up the yacht and set up a charter-boat business. There are hints that not all is well between Sarah and David, and the boat symbolizes a "new beginning." Everything is riding on this: their happiness, their finances, their marriage.

After fixing up the boat, the family sets off for Bermuda, heading right for the Bermuda Triangle. Onboard are the Greers, as well as first mate Mike (Manuel Garcia-Rulfo) and Lindsey's boyfriend Tommy (Owen Teague), a tattooed kid from "juvie" whom David mentored. There are already weird signs. Mary starts to act out. Her crayon drawings are increasingly alarming. Sarah sees wet footprints across the floor, but no one's there. Tommy is practically hypnotized by the masthead. Sailors are some of the most superstitious people around. They trust their bad feelings. David is an experienced sailor, and yet he ignores all the signs. "Mary" is the kind of movie where everyone ignores the signs.

What's great about Mary's concept is that it's Stephen King's Christine, except on a yacht in the middle of the ocean. If a car is haunted, you leave the car and go into your house or run across a field or hide in a bush. If a yacht is haunted, there's nowhere to go. You're surrounded by hundreds of miles of ocean. The feeling of entrapment is palpable in "Mary", and some of the film's creepiest moments are the shots of the yacht, surrounded by a gigantic ocean, highlighting the isolation. Goi, who has years of experience as a cinematographer, films those tightly cramped yacht quarters beautifully. It's claustrophobic in the extreme.

Mary has the concept, but it doesn't take any real imaginative leaps. You have a haunted vessel, trolling the waters of the Bermuda Triangle, with a mermaid-siren-death-maiden on board, taking down the boat's occupants one by one ... And yet nothing really is made of all of this beyond the bare bones obligation to the plot. The most obvious example of the film's strange refusal to take an imaginative leap is David's initial obsession with the boat, presented as slightly supernatural in nature: he is drawn to the boat, lured to it by some mysterious pull. Yet once the journey is underway, it is everyone else affected by the boat, everyone else falling into the masthead's staring blank eyeballs, etc. David is immune. This is not a strong choice!

An acting teacher of mine used to ask us, when we were working on a scene and stuck between a couple of different choices: "Which choice does more for you?" It's a crucial question when it comes to storytelling. You should make the stronger choice, the choice that "does more for you" in terms of telling the story. In the case of "Mary," the choice made is: David wants a fresh start in life, and the boat represents his fresh start. A far more interesting choice (present in the scene where David buys the boat): David is "seduced" by a supernatural entity, a siren-mermaid type being, and this "love" for the siren replaces the love he has for his family. Looking at these two choices, it's pretty obvious "what does more for you." But "Mary" ignores David's susceptibility to the siren, and instead we are treated to interminable scenes where David and Sarah argue about their marriage. "Mary" may take place out on the ocean, but the story travels in very shallow waters. 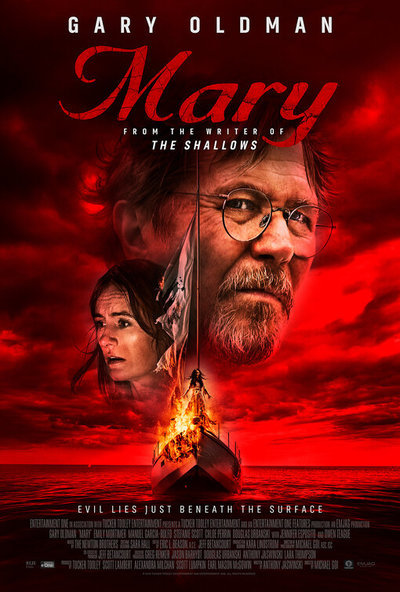 Rated R for some terror, violence, and language.