Mary and the Witch's Flower

“Mary and the Witch’s Flower,” the first film from Studio Ponoc, an animation outfit founded by Studio Ghibli veterans Hiromasa Yonebayashi and Yoshiaki Nishimura after Ghibli closed its doors in 2015, starts in medias res, with a violent firestorm engulfing the screen. A small girl with bright red hair escapes the maelstrom by flying away on a broomstick, pursued by dolphin-squid-fighter-jet hybrids. She plunges down through the clouds and crashes into a field, where her stolen cargo of glowing blue flowers scatters, instantly transforming the landscape (trees burst out of the earth to towering heights in the blink of an eye). Who she is, where she is, and why she needs to escape isn’t revealed until nearly the end of the film.

After the action-packed prologue, “Mary and the Witch’s Flower” segues into another world entirely. In bucolic England, another red-haired little girl, Mary (Ruby Barnhill, in the English dub version), waits out the final days of summer vacation while staying at the home of her great-aunt Charlotte (Lynda Baron). The only other kid around is a boy named Peter (Louis Ashbourne Serkis), whom Mary takes a disliking to for no apparent reason. One day, she follows a black cat—who appears to be beckoning her on, like the white rabbit in Alice in Wonderland—into the forest. Deep in the forest, she discovers a twisted tree with a broomstick embedded in its trunk and blue flowers glowing at its roots. Mary picks one of the flowers, and is promptly yanked into the sky by the broomstick, which whisks her—and the cat—to a mysterious colorful city floating in the middle of the clouds. This is Endor College, a school for witches.

Headmistress Madame Mumblechook (Kate Winslet) gives the agog Mary a tour of the school and becomes convinced Mary is a prodigy, the likes of which she has never seen. “Red-haired witches have always been supremely superior,” she gushes. Mumblechook brings Mary to see Doctor Dee (Jim Broadbent), a small Lenin look-alike, who scribbles formulae on gigantic blackboards, trying to perfect his hush-hush experiments in transformation. He, too, is impressed by Mary’s promise. All of this unfolds in a pure and almost stately atmosphere of accord and exchanged pleasantries. It’s not until halfway through the film that any conflict arises. Is Endor too good to be true? Well, what do you think?

“Mary and the Witch’s Flower” tiptoes into some pretty interesting territory about magic, its proper and improper—even immoral, unethical—uses. Eventually, when Mary goes up against Mumblechook and Dee, she won’t rely on magic to get her through but ingenuity and courage. This is not the expected path for a film about magic; it’s saying, essentially, “You don’t need it. You’ve got everything you need with you already.” I found this aspect of the film tremendously exciting, especially how it plays out in the final third.

The animators invoke worlds upon worlds in “Mary and the Witch’s Flower:” the green woods and mist-filled forests of England rendered in swooning evocative watercolors, and the show-stopping Endor, a psychedelic space from out of a dream or drug trip, packed with strange objects, unexplainable phenomena, students floating by in soap bubbles, fountains morphing into human form, grotesque creatures loping out of the shrubbery and disappearing. Endor is dazzling in an off-putting way (similar to some of the “worlds” presented in “The Congress,” where animated avatars engulf their originals.) The action sequences are intricate and thrilling.

“Mary and the Witch’s Flower” is based on The Little Broomstick, a 1971 children’s novel by popular British author Mary Stewart (who just died in 2014). It’s not hard to picture J.K. Rowling reading The Little Broomstick as a child, getting swept away by the story of a regular kid (who’s really not regular at all) attending a boarding school run by witches and warlocks. There’s a lot here reminiscent of other stories, like Alice in Wonderland, Wizard of Oz, Harry Potter, as well as other films from the Studio Ghibli canon. Yonebayashi’s Oscar-nominated “When Marnie Was There,” also adapted from a British YA novel published 50 years ago, features a little girl who discovers an abandoned mansion while staying with her relatives in the English countryside. Hayao Miyazaki’s “Kiki’s Delivery Service” comes to mind, too, tracking the adventures of a young witch and her “familiar,” a cat named Jiji. “Mary and the Witch’s Flower” doesn’t feel derivative, but it lacks the depth of these other explorations.

Mary, as a character, is refreshingly unremarkable. She’s a regular kid. She has empathy for animals. She’s got a healthy temper. She takes joy in the simple things. She’s helpful to her great-aunt. She hates her hair. She follows the gardener around asking him questions. She seems like a real child (Barnhill’s performance is excellent). However, there’s nothing missing for Mary. There’s no real inner conflict in the character, informing her choices (consciously or unconsciously). She’s unhappy about being too clumsy to help around the house. She’s annoyed by Peter, even though he’s friendly to her. Conflict doesn’t have to be some huge melodramatic thing, but the total lack of inner conflict in Mary might be why “Mary and the Witch’s Flower”—as transportive and entertaining as it is—feels a little slight. 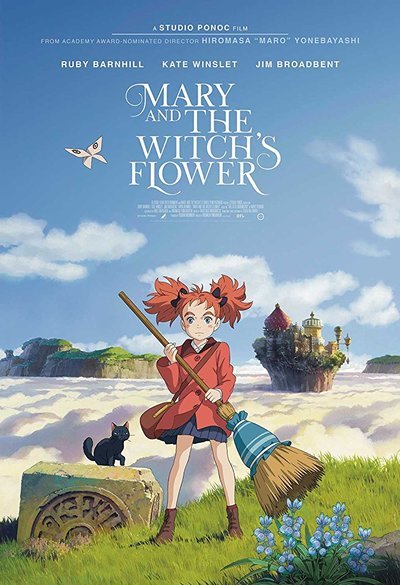