You're going to fall in love with Martha Cooper, one of the most ebullient subjects ever to be captured in a documentary. And director Selina Miles matches the energy of her subject and of her subject's subject—street art like graffiti and hip hop—with exceptionally dynamic cinematic technique.

Cooper is a photographer. Her camera is the way she expresses the deep love she has for the kind of people who, in her words, are "doing their best with what they have" and "rising above their environment." She does not care about celebrities or models or landscapes. She says other photographers make pictures, but she takes pictures, and her photos have an almost visceral immediacy. For Cooper, what's beautiful is a child whose only toy is two blocks connected by a nail that for him is an airplane, and when it falls apart he puts it back together and makes it fly again.

In 1970s New York, most of the arts and media establishment saw graffiti on the outside of subway cars as vandalism, a physical manifestation of the city's decay. But Cooper saw it as resilient, vibrant, and real. She says she is "fascinated with the creativity that's part of people's daily lives." She immediately fell in love with the people who wanted to make their mark on the trains. And through the magic of her camera, showing us what she sees, she takes what people might consider ugly or sordid or even an affront and she shows us its beauty. The photos do not make it beautiful; they reveal what makes it art.

A lot of preparation and planning went into the graffiti art images and into the tactics for the creation of the final versions. Cooper was—and still is—thrilled to be invited along as masked artists with spray cans sneak into the subway stations to create their tags. "They didn't give me nowhere else to paint," one artist says. Budget cuts to extracurricular school programs made them, in Cooper's words, do their best with what they had.

Cooper's first book was rejected by every US publisher she approached. The German publisher that accepted it lost money, in part because the people who wanted copies stole them. But over the years, it was photocopied and distributed widely in the underground community of graffiti artists that grew to include other kinds of street art, like breakdancing and hip hop.

Before Cooper's images transformed the way people in the arts community saw graffiti (which the artists themselves called "writing"), they transformed the graffiti artists themselves. Decades before the work was taken seriously by the art world, her focus helped the people creating the work think of themselves as artists and it inspired a generation of new artists to express themselves. One of the joys of this movie is seeing these young people treat Cooper as something between a rock star and their grandmother ("maybe mother" she tells one of them).

Cooper's utter clarity about who she is and what she wants to photograph contrasts with her conflicting feelings about how she wants to be seen. She is delighted that her books are so popular but does not like the receptions where people want them inscribed.

Cooper says she does not care if she has a legacy: "I'll be dead." But we see a clip of her at one of the ultimate signifiers of 21st century cultural significance—giving a TED Talk. And she wistfully says she'd like to be a Google Doodle.

"Martha: A Picture Story" deftly compares Cooper to the gatekeepers of the art world, like the gallery owner who dismissively tells her that pictures of cute children or people smiling do not read as "art" to buyers, and the casual mention that a graffiti artist who appears in one of her most iconic photos from the '70s has just sold a painting for nearly a quarter of a million dollars. As Cooper looks thoughtfully at a drawing he gave her, knowing that she will not sell it even though she can use the money, we get an even deeper appreciation for the rare person who does not wait to be told what art is; she just knows it when she sees it. She makes us see it, too.

Available on VOD on March 16. 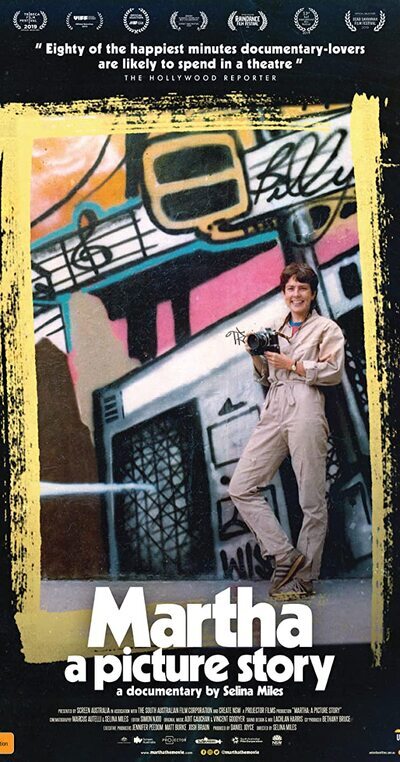