What happened in Boston on April 15, 2013 wasn’t just a moment in which an immediate threat of stateside terrorism showed its face again, it was the beginning of a test of the human spirit, coincidentally but poetically set at the finish line of a 26.2 marathon that starts in a small town and ends in downtown Boston. For an endless amount of people, that very test included remaining "Boston Strong," a motto for resilience and self-pride through the trauma of the bombing, which had taken a toll on their spirits, and for certain people, their lives. While other narrative features about the bombing are coming to theaters soon (December's “Patriots Day,” March 2017's “Stronger”), this HBO documentary gets its name from how a different endurance test was just beginning by that finish line on Boylston Street on that fateful day.

Spurred from the Boston Globe’s Pulitzer Prize-winning coverage of the event and aftermath, this doc focuses primary on people who survived the attack, and the trauma they endured through physically and mentally for years after. The bonds are beautiful: a married couple who both lost limbs, with bodies on different speeds of rehabilitation, who take physical therapy with veterans at Walter Reed Hospital in VA; the Corcoran family, who struggle with losing a sense of self to the damage done to their bodies and what they’ve seen; the Norden brothers, whose lives were forever changed from the bombing but found support from each other. Everyone shares their lives with us, before, during and after the attack, much of it including intimate imagery of their recovery process: scars, physical therapy sessions, defeated talking head interviews and all. This film is a warming tribute to their strength.

The stories are told by co-directors Ricki Stern & Annie Sundberg, previously of documentaries like “Joan Rivers: Piece of Work” and “My Father’s House,” the latter from last year. Their approach to the story is broad, covering as many pieces of the story as possible, always highlighting, with mixed results, definitive emotion. In the process, it documents not just the survivors’ stories but the search for the manhunt for the suspects, the preceding trial, the debates about death penalty that followed, and more. The Boston Globe’s reporting is at the middle of it all, with the reporters becoming talking heads about their different investigations as they sit inside a hall of stacked, dying newspapers.

In its narrative scope, the expanse and organization of footage is impressive, including everything from the seemingly endless amount of photos from the day to CCTV footage that helped the police catch the terrorists. For such a story that you think you might already know, especially with all of the in-depth reporting, “Marathon: The Patriots Day Bombing” provides a comprehensive look at the events, a success of its mission even when it uses these details to service broad themes.

Despite its clear good intentions, this is a documentary that wants to talk about everything possible regarding the events and the aftermath, but it also unfortunately too often wants to tell you what to feel. Along with a wall-to-wall score by Paul Brill, Stern & Sundberg's direct storytelling risks distilling the intensity of so many emotional passages by simplifying these human moments. For intimate narratives that are about incomplete or in-progress healing, and the elements of lives that are changed forever, the approach can feel too tidy. The choice of erring closer to crowd-pleaser is one I don’t agree with, but with the need to put these events into one film, I can somewhat understand.

But whether the filmmaking ultimately worked for me or not, I finally felt “Marathon: The Patriots Day Bombing” when its journey brought me back to the finish line, three years later after the bombing. Some of the people we’ve gotten to know throughout the story are back in the race, the others waiting at the end. Hugs and smiles are exchanged, and the victory of overcoming a fear of terrorism is overshadowed by the even greater success of keep on keepin’ on. For a story that provides an unbeatable image of love overcoming evil and how that deeply connects strangers and loved ones, it’s an unforgettable example of the everyday heroism that comes from within. 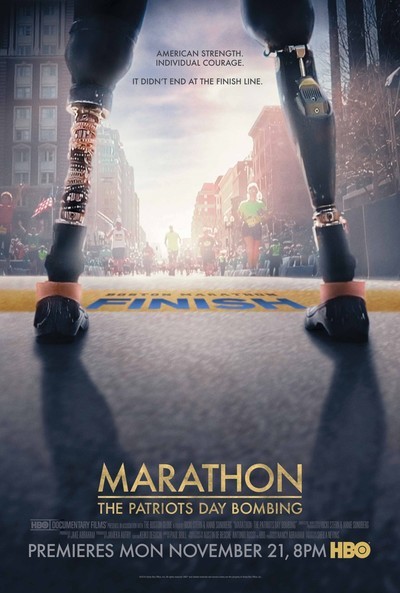