Keanu Reeves has a mixture of stilted awkwardness and gangly grace that is uniquely his own, and that makes him an often strange, disaffected presence. This can either work or not work. His line readings are sometimes baffling. But his simple sense of truth and touching trust in the material (whatever it may be) is one of the reasons his career has lasted so long. There isn't a ton of ego in his work. It's refreshing.

"Man of Tai Chi", Reeves' feature film directorial debut, has the same sometimes-awkward blend that Reeves brings to the table as an actor. The film is super serious (as befitting the martial arts genre, where everything is a matter of life or death), with moments of strange stilted dialogue (also par for the course) and scene after scene of thrilling physical combat, filmed with grace and certainty and no small amount of awe for the athletes involved.

Tiger Chen, a stuntman in the two "Matrix" sequels, plays the eponymous character, also named "Tiger Chen". He is a devoted practitioner of the ancient art of tai chi, working with a master named Yang (Yu Hai) in a beautiful temple. For his day job, Tiger works as a delivery boy, driving packages around the city, and flirting with a receptionist at one of his regular stop-offs. He lives with his parents. He does not have ambition to "do anything" with tai chi, because the rules underlying his apprenticeship with Master Yang say that those who practice tai chi do not do so for money, glory, or even to win. But during a public competition, his undeniable skill brings him to the attention of a mysterious individual named Donaka Mark (Reeves). Donaka lives in a cold man-cave of a penthouse, furnished in black leather and chrome. He strolls around barefoot on shiny black marble floors, he speaks only in terse commands. He has a security detail working for him that would rival the NSA's. He reaches out to Tiger, offering him a security job, when in reality it is a recruitment for a deadly underground fighting ring.

Tiger is flown to an undisclosed location, put into an empty grey room with a mirror on one wall, as he waits to see what will happen. A female voice commands: "Fight", and from out of nowhere an opponent grabs Tiger from behind. Tiger is then engaged in a fight for his life in that grey room with the big mirror, and it is an Alice-through-the-looking-glass moment which will bear fruit through the rest of the film: Like Alice, Tiger is catapulted from one strange experience to the next. The normal rules of regular life no longer apply.

Donaka, of course, is watching through that mirror. That first fight is a test. Tiger passes, but it is only the first of many. Donaka's fight club is run like a cult, where essential information about the nature of the organization is withheld from the participants until they are too deeply embroiled to get out. Tiger finds himself back in that grey room again and again, fighting increasingly vicious and skilled opponents. To what purpose? What is it all for?

The money Donaka offers is substantial. When Master Yang's temple is slated for demolition unless money can be raised for necessary repairs, Tiger caves. And so the sacred temple is now being financed by someone who has betrayed the underlying principles taught there, a terrible irony. Tiger Chen, a superb athlete (to watch him is to go slack-jawed in wonder and appreciation), is also a terrific actor, going believably from sweet open kid to cold lean killer with a haunted aspect. "Man of Tai Chi" takes place in a deeply moral universe where our choices have spiritual implications.

The fighting ring is illegal. The cops (one in particular) close in on Donaka, who remains elusive and omniscient. Donaka understands that tai chi is not the usual fare in the martial arts underground, and he gets off on the fact that Tiger has sold out. That's the turn-on, the power trip. Reeves isn't in the film all that much, and there are a couple of extremely stiff scenes of dialogue, but he does get a very impressive fight scene with Tiger near the end. This is Tiger Chen's picture all the way. You watch him transform, and you watch his soul go dark.

Cinematographer Elliot Davis films the fight scenes with thrilling immediacy: lots of long takes, so you realize you are actually seeing these guys actually do this, as opposed to watching something pieced together later in the editing room. The camera circles and rises and pulls back, moving horizontally and vertically with the movements of each fight. The filming is intuitive and visceral. There's one masterpiece of a scene that takes place in a hidden night club floating in the bowels of a cargo ship in Hong Kong harbor. The setting is surreal: the circular stage painted with psychedelic dizzying swirls and the circular tables surrounding said stage, not to mention the bored elegant silent crowd, is reminiscent of the midnight theatre scene in David Lynch's "Mulholland Drive" or the freaky tiered nightclub in Josef von Sternberg's "Shanghai Gesture". Each fight gets more dangerous. The stakes rise. Death is the only possible outcome. Reeves approaches the genre with respect and passion. "Man of Tai Chi" is hugely entertaining. 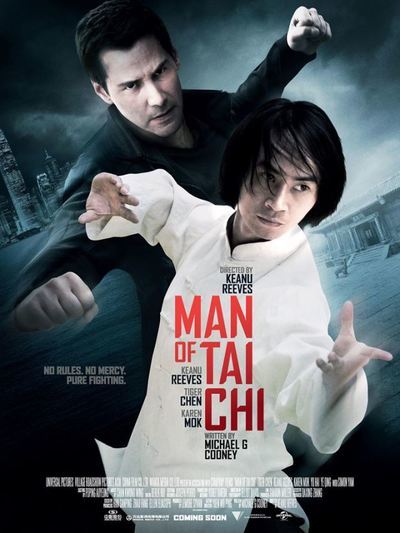