A Depression-era story of old age, tough and level in its gaze

When I was still living in Urbana, I would often take my mother for a drive. If our way took us past the Champaign County Nursing Home, she'd invariably say, "There's where I'm going to end up." She saw herself old and lonely, abandoned by her only son. This was when she was only in her 50s. She said she'd been shaped by the Depression, when old people for the first time had to "live on the county."

"Make Way for Tomorrow" (1937) is a nearly-forgotten American film made in the Depression. It tells the story my mother imagined for herself. A couple has lived happily together for 50 years. They lose their home to a bank. Their five grown children are sincerely sorry to hear this, but what can they do with them? One has moved to California and is rarely heard from. The others live closer, but don't have the space to take in two people. It is decided that mother and father will stay with two different children, "for now." Their last night in their home is the last time they will sleep together in the same bed.

Oh, it's not that their children don't love them. It's that they're so -- busy, you know. Their kids will find them a place "as soon as possible," but for a "few weeks" Lucy Cooper will share her granddaughters' room, and her husband Barkley will sleep on a son's living room sofa. He is in New York City, she is in a small country town.

They talk on the phone. They write. As time passes and they wear out their welcomes, Lucy (Beulah Bondi) discovers that her son George (Thomas Mitchell) and his wife Anita (Fay Bainter) are thinking of sending her to a rest home. It's decided that Barkley (Victor Moore) will take the train to California to stay with the unseen daughter. This is all "just for now," of course.

The movie is not a melodramatic tearjerker. It's so tough it might not be filmable today, when even Alzheimer's stories have happy endings. The director, Leo McCarey, made his name with laughter and uplift. He was the first to pair Laurel and Hardy, he directed the best Marx Brothers' movie ("Duck Soup"), he made those films our priest sent us to see, "Going My Way" and "Bells of St. Mary's." In the same year as "Make Way for Tomorrow," he made Cary Grant a star in "The Awful Truth." When McCarey won the Best Director Oscar for the latter, Peter Bogdanovich tells us, he stood up and said, "You gave it to me for the wrong picture."

"Make Way for Tomorrow" film is quietly observant about the social awkwardness of the situation. None of the children are cruel. They all speak with their parents kindly. There are no villains. But Anita holds bridge classes in her living room, for perhaps 20 students. When Lucy comes in to sit in a rocking chair, it creaks. The players are distracted. When she tries to make conversation, she talks about hearts, which she played instead of bridge. When Bark calls, everyone can hear her speaking into the phone, and what they hear is sad. Lucy means well. Anita knows she does. But it's not working out. If only she would stay in "her" room -- which the young daughter feels territorial about. Anita and the daughter take turns trying to shift an overlarge portrait of Bark back and forth between the bedroom and living room. When your house has been "decorated," you don't want old-fashioned portraits.

At his son's expensive New York apartment, Bark develops a cold while sleeping on the sofa. A doctor is called, and his daughter in law quickly moves him into the couple's bedroom, tucking him in so the doctor won't learn the truth. He receives a visit from the only friend he's made, an old Jewish store owner (Maurice Moscovitch) who sizes up the situation and whose reaction is perfectly summarized by McCarey in one significant gesture only Bark can see.

The fact is, old people don't fit in the modern lifestyle. The fault is with the lifestyle, but there you have it. In traditional societies, families often lived in the same house, children taking over as their parents passed on. In my life and in my family I've seen this, but you don't see it much anymore. "Seniors" in TV ads are tanned, fit and sexy, playing golf, happy they planned for their futures. If they're not struck by lightning on the golf course, they'll grow old and sick, health costs will melt away their savings, and they'll end up living in a "home," whether it's on the county or not. The happy stars of the Seniors ads from the 1990s aren't so photogenic today.

Yet the movie plays fair, if you can call it that. When Lucy unsettles the students in the bridge class, Bondi doesn't make her cute or lovable. We catch ourselves thinking she reallyisa nuisance. She might get on our nerves, too. Of course we always identify ourselves with the children, not the parents. In our society we think it proper that children move out on their own, and we say empty nesters are at last free to enjoy their golden years. But what kind of a life is it is when every nest is empty? Don't old ears need to hear chirps?

The great final arc of "Make Way for Tomorrow" is beautiful and heartbreaking. It's easy to imagine it being sentimentalized by a studio executive, being made more upbeat for the audience. That's not McCarey. What happens is wonderful and very sad. Everything depends on the performances. Beulah Bondi was not yet 50 when she played Lucy (with makeup by Wally Westmore) and Victor Moore was 61. In appearance, movement and performance, they are very convincingly old. In the film they're around 70. That was thought a much older age in 1937 than it seems today.

Their children arrange for them to meet in the city before Bark gets on the train for California, where his daughter has "found a nice place for him. This is "only until they can get together again," of course. These lies make it possible for us to get through life. Often we're lying to ourselves. There's a family dinner planned for the evening, but Bark and Lucy make their own plans. What they do and how it makes us feel is a tribute to the artists. It isn't ramped up for easy smiles. It doesn't give us a any consolation. They're happy, but not deceived. The Japanese might describe their hours together asmono no aware,which is roughly "a bittersweet sadness at the passing of all things."

It's said this film inspired Yasujiro Ozu's "Toyko Story," the only film that ever made my students cry. This one might do the same. Entertainment is about the way things should be. Art is about the way they are. The closing passages of "Make Way for Tomorrow" depend on deep empathy between the filmmakers and the characters. They respect them. These two people have spent a lifetime together, raised a family and lived in their own home until Bark got laid off. They've maintained a mutual dignity and they're not about to turn sappy now.

Look at how gently, and with what respect, they treat each other. Observe how certain strangers, caught up in the business and pleasure of their own lives, observe this and glimpse for a second their own futures. See how strangers can be kind -- for a moment, anyway, although they too may have parents they don't have room for.

What's so powerful about the film is its level gaze. It calmly, almost dispassionately, regards the situation and how it plays out. No spin. It is the same with "Tokyo Story." The most powerful films often simply show you events without instructing you how to feel about them. It is remarkable that a film this true and unrelenting was made by Hollywood in 1937.

"Make Way for Tomorrow" has just been released in the Criterion collection. 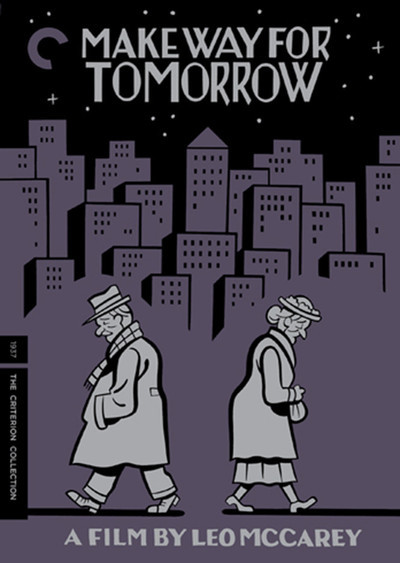