Filmed over three years in the U.S. and China, Miao Wang’s “Maineland” follows two Chinese teens, Stella Zhu and Harry He, as they study and live at a college preparatory boarding school in a tiny Maine town. At the end of their experience, the bubbly, personable Stella effuses that she has made her best friends at the school.

There’s just one thing: from what viewers can see, all of her closest friends are Chinese. What does Stella think about this? What do non-Chinese students think? What do the school’s teachers and administrators think? If there’s a kind of self-segregation at work among the Chinese students, is this inevitable, incidental or something that needs to be addressed? Does it jibe with the school’s educational mission, or cut against it?

That’s just a small sampling of the many intriguing questions that go unasked in “Maineland,” a documentary that offers some fascinating if glancing insights into a rich and timely subject but ends up being more frustrating than enlightening. That’s largely because the filmmaker has elected the fashionable path of adapting a mainly-verite style that largely eschews the kind of talking-heads interviews that might have provided important, clarifying information.

Fryeburg Academy, the school depicted here, resembles many private U.S. schools in having reacted to financial challenges by seeking out foreign students able to pay its substantial tuition for a boarding-school (and English-language) education. Beginning around the turn of the millennium, Japanese kids started to enroll in significant numbers, followed by Koreans. In the last decade, though, as China’s financial fortunes have risen, its students have become the most sizable foreign contingent at many schools.

Early in “Maineland,” we see Fryeburg admissions director Christopher Hibbard on one of his annual tours of Mainland cities, selling the educational virtues of his school to students and parents. Here we meet the families of Harry, in Guangzhou, and Stella, in Shanghai. The parents in both cases seem typical of China’s newly prosperous upper-middle class, with its oddly rather provincial cosmopolitanism; understandably, they want educations for their kids that will help them in an increasingly globalized marketplace and culture.

As for the kids, they’re different in ways that yield contrasting results for the film during their time at Fryeburg. Outgoing and vivacious, Stella is an ideal documentary subject; we easily sense her enthusiasm and intentions in becoming a cheerleader. Harry, a rather lumpish, introverted sort, on the other hand, is less ideal; rather than engaging with others, he retreats into his love of music, leaving us to wonder what he’s really thinking.

Early on, the point is made that where Chinese education emphasizes rote learning and rigorous examinations, American schools like Fryeburg try to teach critical thinking. While this seems appealing to the Chinese students, it’s so different from their past education that it’s not easily mastered. The film contains relatively few classroom scenes, but there’s a memorable English class where the students discuss S.E. Hinton’s novel The Outsiders and respond to the teacher’s question of whether they identify more with the Greasers or the Socs.

Much of Wang’s chronicle of the Chinese students’ time at Fryeburg is an impressionistic kaleidoscope of school activities, dorm-room antics and visits to local fairs and parades. While sit-down interviews are largely avoided, we get occasional voice-overs by Stella and Harry reflecting on their experiences and evolving views of the culture they’re temporarily inhabiting. Overall, these convey an understandable ambivalence. While both students appreciate much about American culture and education, China remains their home and native culture.

Visually, the film offers plenty of evidence of the Chinese students’ clannishness. When we see them outside class, they’re usually chatting or hanging out with each other. Though Stella seems attracted to a Latino boy at one point, there are few if any substantial interactions with non-Chinese students.

Again, one can’t help but come away from the film wondering what everyone concerned makes of this situation. It would be interesting to hear what teachers think about how it affects the learning environment. And to hear school administrators debate whether the Chinese students would benefit if they were fewer in number, or if reducing their number is precluded by the school’s dependence on their financial input. A more substantive documentary would have addressed rather than skirted such issues. 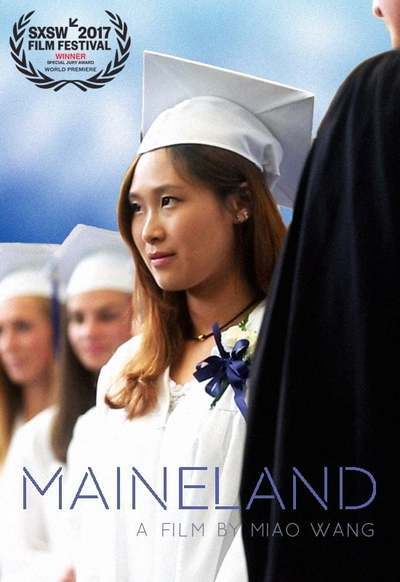