Jeff Lipsky's "Mad Women" is a series of interminable monologues, two or three per scene. Characters sit around, even during tense confrontations, and listen to each other talk without interruption. The actors feel at sea in a torrent of words. The plot of "Mad Women" is ridiculous, unmotivated and "shocking," but that wouldn't be an issue at all if there had been some attempt at style, or mood, or a point of view.

The Smith family is a piece of work. There's mom Harper (Christina Starbuck), who has done jail time for conspiracy to commit murder (she planned to kill a domestic terrorist responsible for attacks on abortion clinics), and is now running for mayor of her town on an insane platform involving getting rid of the post office, bulldozing cemeteries and seceding from the nation. There's dentist dad Richard (Reed Birney), jailed for statutory rape (the rape took place in the bathroom at a Jackson Browne concert, while he was high on LSD). They have three daughters: one died at the age of 3, the other lives abroad working with Doctors Without Borders, and the middle child, Nevada (Kelsey Lynn Stokes), is a post-grad, living at home, reading, playing tennis and wreaking sexual havoc.

Otto (Eli Percy) leers at Nevada from afar while she plays tennis. Finally, one day, she confronts him about it. She punches him in the stomach. He punches her right back and she falls to the ground. Then they go out for coffee. Then they go home and have sex. Then they start dating. None of this is convincing in any way whatsoever. Their performances are stilted and awkward. It's painful to watch.

The title seems to suggest that every woman in the film is "mad" in some way or other. What does madness mean to Lipsky? It's unclear. There's Harper, whose nutty political campaign speech punctuates the entire film. She seems off her rocker, but her audience laughs and nods in approval. There's Nevada's one-eyed grandmother devoted to archery, despite her lack of peripheral vision. Nevada has no boundaries, and tells her therapist in a flirty way that she is "shallow": she remembers playing in a bathtub with 5 other children when she was a kid: "I was shallow ... in the shallow end of the tub," she concludes (an example of the overwritten script).

In one of the "maddest" scenes, Nevada comes on to her mother sexually, and the two begin a passionate affair. Say what? It's queasy and taboo, sure, but it could have shown the nasty no-boundaries underbelly of the high-achieving Smith family, but Lipsky is unable to manage such complexity. The actors seem embarrassed, as though they are going through the motions, obeying the script before they as actors figured out why the characters are doing what they are doing. When Nevada tells Otto about the affair with her mother, he says, "You're cheating on me? With your mother?" Kelsey Lynn Stokes' line readings tend towards a sarcastic bored-teen eye-roll attitude, which wears out its welcome almost immediately.

There's a juvenile obsession with the female body. There are multiple mentions of menstruation, "pooping", pubic hair ... as though these are not natural elements in a woman's human life but strange anomalies that warrant a double-take. Nevada tells Otto she's on the pill, and he seems surprised at her openness about being sexually active. Really? Lars von Trier tackles such stuff humorously, intelligently in "Nymphomaniac," a dissertation on female sexuality and the male reaction to it. Male fascination with female bodies has often been the primal stuff of art. Nothing wrong with that, necessarily. But "Mad Women" lacks self-awareness about it. There's a lot of leering in "Mad Women," including a neighbor who spends all of his free time staring into the Smith house from the next lawn with binoculars. The Smith family all brush it off: "Oh, that's just the way he is." Is "Mad Women" a comedy? A satire? Who knows.

Last year's wonderful "The Strange Little Cat" also featured a lot of theatrical monologuing, but the device was used in a Brechtian way, cluing the audience into the fact that the film was not meant to be realistic. The monologues were dreamy, strange and compelling. In "Mad Women," they are boring, repetitive and too descriptive. The other actors in the scene sit there, listening patiently, never interrupting. Maybe "Mad Women" isn't supposed to be realistic but Lipsky has not set up a style that helps any of this make sense. His direction is uninspired, featuring a lot of long unmoving takes, with two people sitting in the same space, as one of them talks for 5 minutes. The language is so artificial that you can still picture it as typeface on the script-page. The scenes feel like the first table-read.

Halfway through the film, Nevada asks Otto, "You want to hear an epic story?"

No thanks. I'm good. 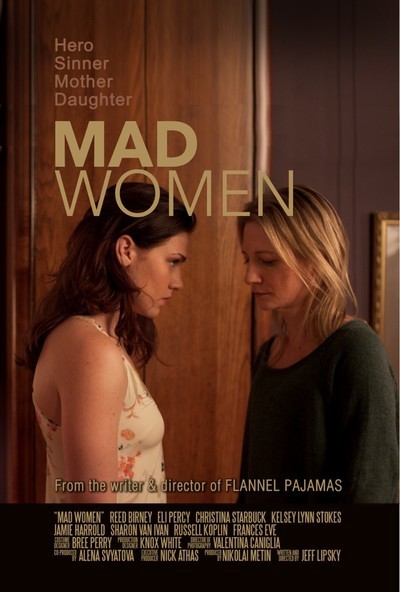