In the body-switching story "Mack & Rita," Diane Keaton plays a 30-year-old whose wish to be an old lady comes true. Though it doesn't happen in the usual way of waiting 40 years, but in a matter of moments after she visits a "regress and be blessed" past lives specialist in a tent. The film's promising setup and excellent cast are let down by a script so forgettable that even to try to summarize it is to feel it dissolve from memory.

Mack (Elizabeth Lail as the 30-year-old version) was raised by her grandmother, “the coolest old gal” she ever knew, fearless and confident about what she liked and who she was. They loved to poke through vintage clothes together at a little boutique. And Mack was completely at home with her grandmother as she never was with people her own age. She tells us she thought of herself as an old lady trapped in the body of a girl. As she grew up, she learned to pretend to conform, to seem to like what other young women like and wear what they wore. She has one friend who sees and loves her for who she really is, Carla (the always-great Taylour Paige), who is about to get married. The various events around the wedding provide the foundation for the story’s developments.

Mack, Carla, and two other friends go off for a bachelorette weekend at the home of a friend of Carla’s mother and we see that Mack is not quite as good at passing for “normal” as she thinks. She loves the fabulous “old lady” clothes she finds in the closet and has not brought anything for herself that is suitable for the girls’ night out. Carla smiles understandingly and loans Mack something more suitable, with silvery stiletto boots that she wobbles in. When the other women go off to a pop-up Bad Bunny show, Mack teeters over to a sign offering past lives regression. She does not care that it looks very sketchy—the mechanism for regression is a junked tanning bed, and it's run by Luca, played by Simon Rex. She just wants to lie down.

And somehow, when she gets out of the tanning bed, Mack has turned into Diane Keaton. She's able to convince Carla that she is really Mack, but they tell everyone else she is Mack’s fictional Aunt Rita, and that Mack is staying at Rita’s home while she works on her writing. “Rita” is introduced to Mack’s handsome neighbor Jack (Dustin Milligan of “Schitt’s Creek”) and to Carla’s mother, Sharon (Loretta Devine) and her merry band of wine-drinking, live-for-the-moment old lady pals, played by all-stars Lois Smith, Wendie Malick, and Amy Hill.

As in “Big,” the body-switch cannot be undone until the traveling mechanism is located, which provides the opportunity for a series of stunt-ish scenes that most likely appear in the screenplay as “Diane Keaton dithers” and now and then, “Diane Keaton falls down.” The most intriguing characters and relationships are either left on the sidelines or undermined by a script that prizes contrived situation over consistency of character. Carla is understanding and supportive except when she is not, just so she can get mad at Mack/Rita and then make up with her. She cedes control of the wedding to her mother except when she doesn’t so that Mack/Rita can save the day with a visit to that vintage boutique. Sharon randomly insists that she and Rita have to spy on Jack. Rita has to adorably mess up at Pilates and, in the film’s most painfully useless scene, get high on mushrooms and hears the voice of Martin Short.

Another artificial conflict has to do with that old staple, two events at the same time, one for friendship, one for money. And it's time to stop building storylines on social media “influencers” and accounts that go suddenly viral, now as much a cliché as the Hallmark Channel’s bake shops and snowman competitions.

Despite thin characterization from the script, Paige makes Carla a warm, authentic character we would like to explore further, and Milligan brings an appealingly light touch to Jack, showing us that he's drawn to the Mack somewhere inside of Rita. Somewhere inside Mack is an old lady, and somewhere inside this movie is a better one that never comes out. 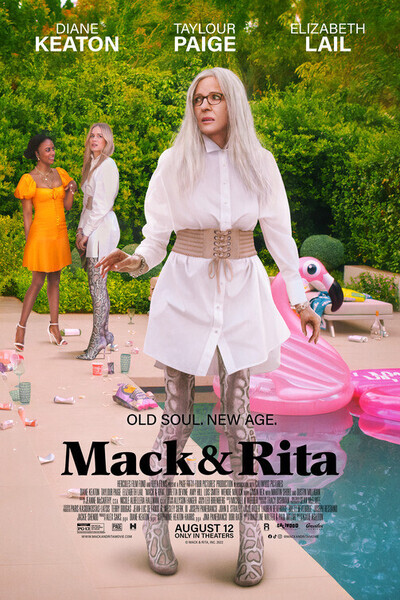 Rated PG-13 for some drug use, sexual references and language.