"Ma Belle, My Beauty" is all about longing: longing for connection, longing for artistic expression, longing what for what used to be. Trying to enter the past, thinking that what you are looking for is in the rear-view mirror, is a losing situation, as the three main characters, who once were in a polyamorous relationship, discover. Everyone has (ostensibly) moved on, and yet there is ambivalence, there are regrets. The polyamorous aspect to "Ma Belle, My Beauty," written and directed by New Orleans filmmaker Marion Hill (it is her first full-length feature), adds a layer of complexity to what is a fairly straightforward romantic drama. "Ma Belle, My Beauty" takes place in the south of France, among sunny vineyards, ice-cold streams, beautiful country houses, populated by fascinating people. Anchored by four very good performances, "Ma Belle, My Beauty" unfortunately suffers from inertia and a lack of conflict. There is conflict, but it's presented in such a languishing way that it leaves the film grasping for something solid to hold onto.

When the film starts, Bertie (Idella Johnson) and her husband Fred (Lucien Guignard) have decamped from New Orleans to live in Fred's parents' country house in the south of France. Both of them are musicians, Fred a jazz guitarist, and Bertie a jazz singer. They are in the midst of planning for a European tour when suddenly Lane (Hannah Pepper), who was once the "third" in the relationship, shows up. Lane's visit was Fred's idea, and they both kept it a secret from Bertie. Bertie is ambushed. She has a lot of anger towards Lane, who vanished for no reason, presumably exiting the relationship. They've been out of touch ever since. In the intervening years, Fred and Bertie tied the knot. It's clear, though, that Fred wants to get the three-way relationship up and running again. He thinks it will be good for Bertie. Bertie is suffering from artistic malaise. She doesn't want to go on tour. Fred thinks Lane might spark Bertie back into her creativity, even saying to Lane at one point, "She hasn't sung like that since you left."

Lane is the wild card in the equation, and she spends a lot of time staring at Bertie longingly, even when Bertie clearly doesn't want to "go there." (Bertie calls her on this at one point. "You're doing that thing with your eyes. Stop it.") Lane is the opposite of chill. On the second day of Lane's visit, she meets Noa (Sivan Noam Shimon), a gorgeous Israeli woman, at a party. Sparks fly, and she brings Noa back to Fred and Bertie's place. Fred and Bertie read in bed, listening to the sexual raptures of the two women next door. Noa is the only one in this quartet who seems to actually enjoy her life.

Shot beautifully by Lauren Guiteras, "Ma Belle My Beauty" takes place in an atmospheric paradise, sunny and summery and lazy, where the sun falls on the vineyards, the hills beyond, the green fields, and people have nothing to do but bike along dirt roads to the local market and drink wine at an outdoor table at night. The look and feel is similar to Luca Guadagnino's "Call Me By Your Name" or even Jacques Deray's "La Piscine" (although the mood there is ominous, as opposed to romantic and satiated), and it creates a luscious backdrop for all this emotional entanglement.

Hill's script is refreshing in that polyamory is not treated in a titillating or salacious way. It's not even dwelled on all that much. "Our ex has come to visit us," Fred tells a friend. It's just how this relationship formed, and that's that. At the same time, it's not altogether clear how these three specific people were connected in the first place. How do those personalities interact to form a whole? Lane says at one point that she never slept with Fred, so Bertie seems to be the draw for both of them. She was the apex of the triangle. One can understand that, considering Johnson's charisma. What is not as clear is what Bertie sees in either of them. Granted, "Ma Belle, My Beauty" takes place in the aftermath, but there isn't really a sense of what drew them all together, how they gelled as a threesome. A tactile sex scene late in the game, or a slo-mo scene of the three of them walking to a party and laughing, does not fill in those blanks.

One of the best things about first features is discovering new talent, and the actors here are all new to me, and excellent, particularly Johnson and Shimon. Bertie is a woman weighted down by many things, and you can see it in Johnson's posture, the way she walks, the way she withholds. She also has a way of taking in the room, of seeing what is really going on, but also not knowing how to handle any of it. When she sings, she throws off all constraints. But she's hurt, she's in pain. In her mind, Lane abandoned her. (Why Lane "left" is never made clear, and it's a blank the script should have addressed. As it is, Lane is basically an emotional state—expressed through agonizingly intense longing glances—rather than a character).

During a difficult conversation near the very end of the movie, Bertie says to Lane, "I don't care. I don't have the space to care." Having seen what we've seen over the course of the film, her words make sense. Everyone wants something of Bertie. Everyone wants her to be different, grow in a different way, do things they think she should do: go on tour, go to rehearsals, commit to singing, start up the thing again with Lane. She's tired of all of it. But being tired of something, and "not having the space to care" is not dramatic. "Ma Belle, My Beauty" obviously cares about its subject, and treats it with respect. But the atmosphere established doesn't leave enough room for real conflict or even expression. There's only so much a longing glance can say. 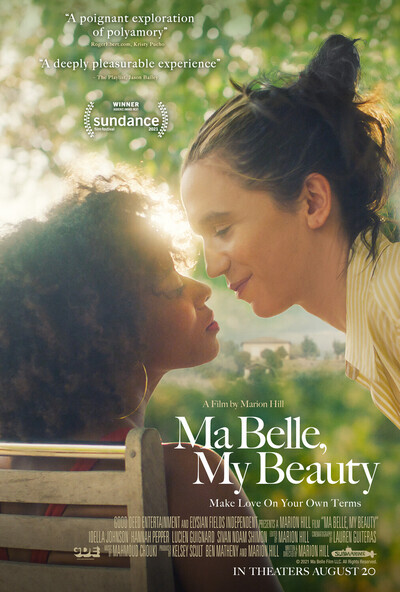