Songs My Brothers Taught Me

The venerable editor-in-chief of this site, Matt Zoller Seitz, once suggested to me that there should be a cable channel called BLTV, short for Badlands Television, comprised of films derivative of Terrence Malick’s “Badlands.” Expanding that idea somewhat, I would argue that BLTV needs to be part of a much larger Malick Network, which would include not only beautiful-young-criminals-on-the-lam tales but also the many films by American indie directors influenced by Malick’s poetic way with light, landscapes and impressionistic narratives focused on inward-looking characters (they’re the ones whose pensive musings are usually conveyed in voice-over).

Chloe Zhao’s “Songs My Brothers Taught Me” would earn a prime spot on the Malick Network (though not, ironically, on BLTV: though set in the Badlands of South Dakota, it doesn’t concern lovers-on-the-lam). It also has another, somewhat overlapping pedigree. A product of the Sundance Labs and their dedication to fostering movies about Native American culture, it is an earnest, smartly mounted film about life on a present-day reservation. If the Malick and Sundance influences combined lead you to expect a work that’s stronger aesthetically and ethnographically than dramatically, then you won’t be surprised by “Songs My Brothers Taught Me.”

The character whose voice-overs begin and end the film, Johnny (John Reddy), is a handsome, muscular Lakota high school senior who’s itching to leave the dreary confines of reservation life and move to Los Angeles. We first see him riding a horse and pensively musing on how it’s necessary to leave some of the wildness in such an animal, which needs that edge to survive. Thankfully, the metaphorical obviousness here doesn’t continue, as Zhao quickly settles into a nuanced, unhurried look at the life Johnny wants to escape.

The boy’s most crucial relationship is with his younger sister, Jashaun (Jashaun St. John), who looks to him for the understanding and emotional support she doesn’t find elsewhere. The two live with their erratic, troubled mom (Irene Bedard), who tries to urge the comfort she finds in religion on an older son who’s in prison.

Johnny’s inclination to strike out in the wider world comes at a difficult emotional moment for his family. Not long after we meet them, he, sis and mom learn that the kids’ father, a rodeo cowboy who fathered 25 children by nine “so-called wives,” has burned to death in his home. This news not only shocks and saddens them, and introduces a soft note of mystery, it also suggests the precariousness of life on the Pine Ridge reservation.

In a scene that typifies Zhao’s anecdotal approach, we visit one of Johnny’s high school classes, where a large snake is being passed around as the teacher asks his seniors what kind of work they hope to do after graduation. There’s not much dramatic purpose to this passage, but we do learn that animals loom large in their plans. The most desired occupation seems to be bull rider.

The narrative torque increases in parts of the story where the problems of alcohol abuse and violence intertwine. There’s a stark emphasis on the bane of alcoholism in several scenes, and Johnny earns money by running booze from across the Nebraska border to the reservation, an activity that earns him the enmity of a rival gang that isn’t above beating the hell out of any competitor and torching his pick-up.

Criminal activity and its perils aside, Johnny is effectively pulled in opposite directions throughout the story. His bright girlfriend Aurelia (Taysha Fuller) wants him to go with her to L.A., where she plans to attend college. His ambitions for the city are far less well-developed, though, and meanwhile his attachment to Jashaun makes it hard for him to actually begin cutting the emotional ties he’ll need to cut if he’s going to leave.

The film is good at conveying his attachment not only to his sibling but also to the Native American culture he grew up in. The story’s ending, complete with lyrical voice-over, conveys the beauty and emotional attraction of the place and its traditions, virtues also relayed by Joshua James Richard’s sumptuous, sometimes breathtaking cinematography. Other assets include the strong performances Zhao gets from her mostly non-professional cast, and Peter Golub’s spare, haunting score. 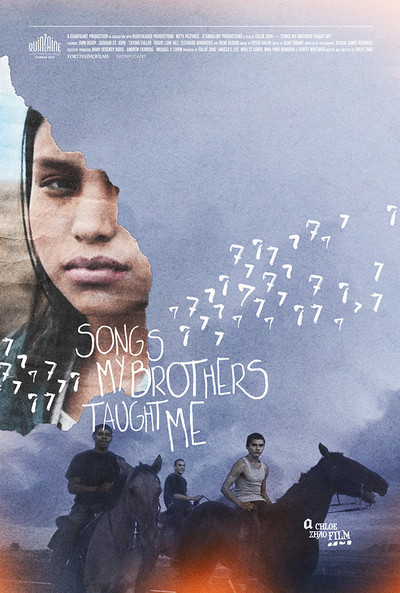