Ricardo de Montreuil’s "Lowriders" tells an age-old story of intergenerational conflict, set within a very contemporary slice of Los Angeles. Fathers and sons can’t see eye to eye, even though they have more in common than they’d like to admit. Longstanding resentments simmer and eventually boil over. As the song goes, parents just don’t understand.

You’ve seen these stories and themes trotted out a million times before, but the surprisingly fresh “Lowriders” features such strong performances from a well-chosen cast, you may not mind. The script from Cheo Hodari Coker and Elgin James breathes life into these tried-and-true conceits with well-developed, complex characters. And de Montreuil, working with cinematographer Andres Sanchez, provides a vivid sense of place and a window into a part of the city we don’t often seen on film.

Set within the mythical Mexican-American car culture of East L.A., “Lowriders” is richly, culturally specific, yet its themes of regret and reconciliation, ambition and competition, love and loss are so universal, it’s easy to imagine the film having well-deserved crossover appeal. And like the ethnically diverse juggernaut that is the “Fast & Furious” franchise, “Lowriders” is all about #family.

Demian Bichir is the Alvarez patriarch, Miguel, who runs a Boyle Heights auto body shop by day. But in his free time, he fixes up old cars, cruises the streets and competes with his lowrider crew of fellow old-timers, the Coasters. It’s more than a way of life—it’s practically spiritual, and it’s how Miguel met his wife, Gloria (a solid, convincingly de-glammed Eva Longoria), after the devastating death of his longtime spouse.

Miguel’s younger son, Danny (a handsome and likable Gabriel Chavarria), has his own form of expression as a graffiti artist, a pursuit dad doesn’t think is worthwhile. Miguel also worries, understandably, about the dangerous and often illegal lengths to which Danny will go to share his art with the world. This is especially true because his older son, Francisco (a charismatic Theo Rossi), aka “Ghost,” just got out of prison after several years for stealing car parts to build his own lowrider, which he drives with his own crew.

Clearly, they’ll all have to meet up at the big showdown at Elysian Park, the hilly section above downtown that’s home to Dodger Stadium, for the annual lowrider competition. But in the meantime, we get a glimpse into the rhythms of these characters’ lives. Danny’s stepsister, Isabel (Montse Hernandez), worries about what dress she’ll wear for her quinceañera. His best friend, Chuy (Tony Revolori of “The Grand Budapest Hotel”), tags along and tries to fit in with Ghost and his tough, older friends.

Meanwhile, Danny starts dating a white street photographer (“Supergirl” Melissa Benoist), joining her for downtown’s monthly art walk and trying awkwardly to blend in with her pretentious friends. In one the film’s best scenes, she puts Danny in a socioeconomic box he doesn’t want to be in while gushing over his work to a gallery owner; it stings, and when he chafes, we feel it.

But the emotional heart of the film belongs to Bichir as a recovering alcoholic who’s made plenty of mistakes and finally finds the guts to admit them. His performance aches with melancholy, but he also finds in this man an unmistakably sturdy sense of pride. Bichir’s exchanges with the charming yet volatile Rossi give the film a steady sense of tension.

“Lowriders” may spell too much out with obvious dialogue, and it may veer a bit too easily toward melodrama. But there’s an earnestness and a fundamental truth to this familial saga—as well as an appealing, low-budget scrappiness—that consistently make it hum. 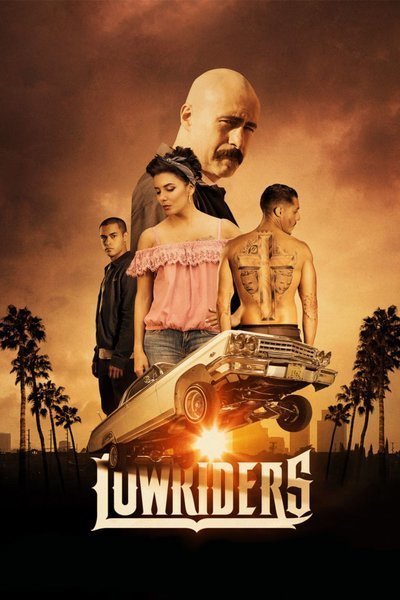 Rated PG-13 for language, some violence, sensuality, thematic elements and brief drug use.