Love, Weddings and Other Disasters

Calling this a film review wouldn’t really be accurate because “Love, Weddings & Other Disasters” isn’t really a film. It’s a slapdash hodgepodge of scenes, hastily sketched, hideously shot, and erratically edited. It lacks basic coherence from one moment to the next and often within individual moments. It is a comedy without a single laugh. And it’s a baffling waste of its actors’ abilities, particularly those of the venerable Diane Keaton and Jeremy Irons.

A question I asked while watching “The War With Grandpa” earlier this year occurred to me repeatedly here, too: What were these people thinking? The fact that Dennis Dugan was directing should have been sufficient reason for Irons and Keaton to give this movie a swift, hard pass. Dugan is best known for directing some of the best-known entries in Adam Sandler’s adolescent oeuvre—“Happy Gilmore” and “Big Daddy”—as well as his more recent comedies including the “Grown Ups” movies and “Jack and Jill.” His record speaks for itself. But theoretically, these actors also looked at the script—which Dugan wrote, as well—before showing up for the first day on set. And so for whatever reason, Irons and Keaton signed on to play, respectively, a persnickety, widowed caterer, and a blind woman whose primary defining trait is tripping over furniture.

Somewhere within this dizzying swirl of lazy and offensive cliches, these characters supposedly fall in love. Because you see, “Love, Weddings & Other Disasters” is one of those movies composed of various plot strands that take place across the same city and eventually intertwine. All the characters are looking for romance, and as their stories sync up by the end, madcap hilarity allegedly ensues. Holiday-themed versions of this kind of uninspired, ensemble rom-com sadly marked the end of Garry Marshall’s career. But “Love, Weddings & Other Disasters” makes Marshall’s “Valentine’s Day,” “New Year’s Eve” and “Mother’s Day” look like Krzysztof Kieslowski’s “Three Colors” trilogy by comparison.

Frantic physical antics and raunchy bits that are too flat to be shocking are consistent through-lines, however. This is true from the very start, when Maggie Grace’s Jessie is trying to persuade her boyfriend to parachute out of a plane with her. She’s calm and confident but he’s shrilly freaking out, and as he wails his head off the whole way down before dumping her mid-air and splashing into a lake, it’s an apt metaphor for the cinematic spectacle to come. But she also happens to ruin a wedding as she crash lands, which earns her the nickname “The Wedding Trasher” in a video that supposedly goes viral and makes her an inadvertent star. This is a problem because she’s a wedding planner herself, struggling to launch a business.

Her first gig, though, is strangely high-profile: organizing the nuptials of the bland Boston mayoral candidate Robert Barton (Dennis Staroselsky). The way the bride and groom, his publicist and Jessie all stand around the church, awkwardly lined up as they make plans and inane small talk, is a prime example of how Dugan apparently still doesn’t know how to block a shot or where to put the camera after decades in the business.

Robert’s ne’er-do-well brother, Jimmy (Andy Goldenberg), goes on a cheap-looking dating game show (hosted by Dugan himself, making sexist wisecracks and swilling champagne) in which contestants have to be physically chained to each other at all times. Late-night infomercials have better production values. Jimmy ends up with a brunette named Svetlana who says she’s a lawyer; she’s actually a blonde named Olga who’s a stripper. And she’s hiding from her abusive club owner—hilarious! Svetlana/Olga is played by Melinda Hill with an inconsistent Russian accent and an array of tight, cleavage-baring dresses. They have zero chemistry, but we’re supposed to believe they could end up together, and not just for the prize money.

Meanwhile, Andrew Bachelor—better known as Internet star King Bach—plays a duck boat tour guide named Ritchie who instantly falls for a pretty passenger. She happens to have a tattoo on her neck of Cinderella’s glass slipper, which leads to a drawn-out saga in which he searches madly for her all over town with the help of a local TV news reporter. The two of them didn’t even share the briefest of sparks to justify this kind of obsession, and this is not how journalism works.

Back to the Jessie storyline, where she checks out a cheesy bar band in hopes they’ll play the wedding she’s planning. The duo performs insipid bro rock, and in an amusing continuity error, the microphone in front of one of them (pop star Jesse McCartney) is either up high or down low, depending on the camera angle. The crowd’s enthusiasm is cringe-inducing in its falseness. But the other guy, Mack (Diego Boneta), inexplicably falls for Jesse, so he wants to play the wedding against his bandmate’s wishes, even if it means abandoning his principles and performing Kool and the Gang’s “Celebration.” This is the extent of the conflict in this movie.

And we couldn’t forget Irons and Keaton, who get thrown together on a blind date—because she’s blind, get it? You know the second Irons’ uptight Lawrence puts the finishing touches on a giant tower of champagne glasses that Keaton’s ditzy Sara will come barreling in with her guide dog to knock them all down. But Dugan can’t make a simple piece of slapstick comedy like this work on even the most basic level. He, too, is barreling into the set-up and knocking over the punchline. And the way he repeatedly has Sara tripping over and destroying things in the name of cheap laughs would be offensive if this movie weren’t so forgettable all around.

Watching Irons and Keaton together, you long for them to co-star in a romance with brains and a heart. Instead, we watch them exchange boring, getting-to-know-you banter under a tree while the gentle strains of an acoustic guitar play in the background. (That’s another facet of the movie that feels wedged in: Elle King serves as a sort of Greek chorus, busking in Boston Common between scenes.)

Dugan jumps around between all these story lines without any rhyme or reason, often cutting a scene short abruptly to move on to the next. Not a single character feels like a real person, there’s no insight to be found on dating or love, and the feel-good finale that ties all these plot threads together is uncomfortably forced. We shouldn’t be surprised, though. The word “disaster” was right there in the title all along.

Now available in theaters and on demand. 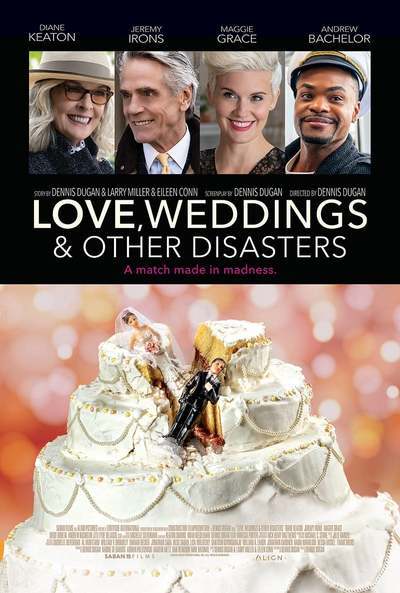 Love, Weddings and Other Disasters (2020)

Rated PG-13 for crude sexual material and some strong language.