“Love, Rosie” is one of those annoying movies in which everything would be just fine if the two central characters had a simple conversation that cleared up all their misunderstandings. But then, there would be no movie – although, in retrospect, that might not be such a bad thing.

Instead, we get contrivances and coincidences, near-misses and almost-theres. This cosmic confluence of events, which takes place over a dozen years, is meant to be swoony and tragic but is actually more irritating than anything else. That the actors playing our would-be lovers—Lily Collins (“Mirror Mirror”) and Sam Claflin (the “Hunger Games” movies)—are appealing individually and have decent chemistry together helps make this thoroughly mediocre British romantic comedy more tolerable than it ought to be.

Director Christian Ditter offers some artful touches in adapting Cecelia Ahern’s novel “Where Rainbows End.” The lighting is often quite lovely, for example—streaks of late-afternoon sunshine in a park, or lamplight filling a darkened bedroom. But for every delicate element there are many others that are heavy-handed or cringe-inducing, including some painfully on-the-nose musical selections. (Salt-N-Pepa’s perky “Push It” plays while Collins’ character, Rosie, is giving birth. Get it? Because she’s pushing!)

But the tonal transition that occurs before that scene—from a sweet and quiet moment of Rosie bonding with her sizable bump to the noisy wackiness of her screaming through delivery—is reflective of the kind of jarring shifts that often make this movie so uneven.

The script from Juliette Towhidi begins in the present day, with Rosie making a speech at a wedding, then flashes back to reveal the lifelong friendship she’s shared with Claflin’s Alex. The two have been inseparable since they were 5 years old; then at Rosie’s 18th birthday, they briefly (and drunkenly) kissed after too many tequila shots. The spark is clearly there.

But in the ensuing years, each has managed to become involved with other people who are just as clearly wrong for them. These aren’t just ill-advised dalliances—they’re aggressively bad picks, depleting the film of even the slightest shred of tension as to its outcome. Alex has a penchant for vapid, leggy blondes. Rosie romps with her thoughtless, pretty-boy prom date and winds up pregnant after a condom mishap.

And here’s one of the many places where “Love, Rosie” takes a detour into territory that isn’t just distractingly unbelievable; it’s downright stupid. Rather than tell her best friend that she’s expecting, Rosie keeps this information from Alex because she’s afraid it will prevent him from heading to Harvard to study medicine. Or something. Boston was their shared dream (she’d planned to study hotel management at Boston College—although she also mentions Boston University, which is an entirely different place) but now he’ll have to go alone while she secretly changes diapers. They grew up across the street from each other in an insular neighborhood; the notion that he wouldn’t find out she has a baby is absurd. But whatever. We need to move on—there are so many other problems here.

Years pass. Alex stays in Boston, ostensibly trying to forge a medical career, although we never actually see him studying or caring for patients. Rosie, following in her father’s footsteps, takes a job as a chambermaid at a posh hotel with dreams of opening her own cozy inn someday. Jaime Winstone (Ray’s daughter), as Rosie’s co-worker and best friend, livens things up while dialing down the clichés of the wisecracking sidekick. And yet: Their conversations definitely don’t pass the Bechdel test. Despite the fact that she’s a grown woman and a mother now, all Rosie can talk about is Alex.

More years pass. Rosie and Alex visit each other across the Atlantic. They send instant messages and text. They flirt and fight and eventually make up—but first, Rosie returns home, feeling gloomy, to the obvious strains of Gilbert O’Sullivan’s “Alone Again (Naturally).” Yet the cruel forces of nature conspire to keep them apart. These include the father of Rosie’s now-12-year-old daughter, who returns to the picture just in time to steal an actual handwritten letter from Alex and then stuff it in a drawer to keep her from reading his confessions of love.

“We just keep missing each other!” Rosie laments tearfully toward the film’s end. Collins and Claflin have a few moments that seem honest and effortless enough to make you wish for them to end that streak, but not nearly enough. 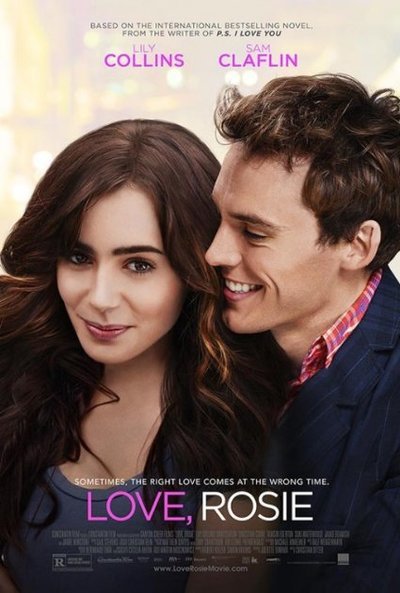