A crime reporter friend of mine once told me that it was usually pretty easy to talk with a victim’s family and friends. Her statement surprised me. I had always assumed such a quick and traumatic loss would leave most people speechless or unwilling to talk. She said sure, some folks have slammed the door on her or told her never to call again, but for the most part, the bereaved want to talk about the person they loved and lost. They don’t want their dearly departed to be forgotten. Some have even thanked her for listening.

Anton Yelchin was an immensely gifted young actor whose burgeoning career was cut short by an accident in 2016. He was only 27. By then, he had amassed an impressive body of work with 60 film and TV credits that ranged from romantic drama (“Like Crazy”), horror movies (“Only Lovers Left Alive,” “Fright Night”), comedy (“Charlie Bartlett”) and big budget sci-fi franchises (“Star Trek,” “Terminator Salvation”). Garret Price’s achingly heartfelt portrait of the actor’s life and work, “Love, Antosha,” captures the energy Yelchin brought to the screen and to his loved ones, friends and co-workers outside the spotlight. His prescence seemed endless, the possibilities for his career numerous, but even before the accident, there was always a fear that the young actor would leave us too soon.

It’s important to note that the documentary is dedicated to the memory of Yelchin as he lived, not as he died. Former cast and crew members pour out their favorite memories of him, and his parents share adorable home videos and the loving notes Anton would write to his mother and sign “Love Antosha,” his original name. He was the only son of Russian figure skaters Irina and Viktor Yelchin, and the young family left their country in the waning years of the Soviet Union to give their son a shot at a better life. Yelchin took on the opportunity his parents gave him what one of his friends called an “immigrant work ethic.” He caught the movie bug early and wanted to pursue acting at a precocious age, but as the home movies in the documentary show, he was just as interested in learning about cinematography and direction. He would go on to dabble in music and photography, impressing his older colleagues with his boundless interest in the world.

There seemed like there was nothing he couldn’t pick up and study, yet behind his prolific career and charming personality lay a guarded secret. All the time audiences were falling in love with his deeply felt performances, he was fighting Cystic Fibrosis, an inherited disease that attacks the lungs and shortens the lifespans of its sufferers. The documentary reveals his battle as a testament to his perseverance. He loved his craft so much, that he never let something as grave as a deadly disorder take him away from the set once he committed to a project.

One of Yelchin’s many famous co-stars, Nic Cage, voices Yelchin’s words from his diaries and emails to his family and friends. It’s a sweet gesture, but it’s the movie’s one off-key note. It’s hard to move past the idea that this is Nic Cage reading the words of a young man who sounded nothing like him. Fortunately, Price draws on the many voices of his co-stars – like Chris Pine, Zoe Saldana, John Cho and Simon Pegg from the “Star Trek” franchise, one-time colleagues like Jennifer Lawrence, Kristen Stewart, Jon Voight and Willem Dafoe to directors like Jodi Foster, J.J. Abrams, Guillermo del Toro, Craig Gillespie and Drake Doremus – to share their memories of him. Chronologically, they recreate one version of his life as a thoughtful professional who pushed himself to do better and sought out independent projects to challenge himself. His parents shared their memories so those who never had the chance to meet him could get a sense of his tender side, of his devotion to them and his loved ones, of candid moments spent playing music with friends, fervently practicing his lines for the camera by himself and dancing with his mom at her birthday party.

There are many watery eyes, wistful sighs and choked sobs in “Love, Antosha,” especially as the movie closes in to the news no one wants to hear about a loved one. How do you lay to rest the possibilities of a life taken away so suddenly? “The human race has been cheated,” a solemn-faced Martin Landau tells the camera. “In a world that moves on very quickly, I don’t ever want him to be forgotten.” With “Love, Antosha,” there’s now a coda to Yelchin’s story beyond somber headlines and obits. There’s an impression of who he once was to those who loved him and a sense of how we might remember him having heard their stories. 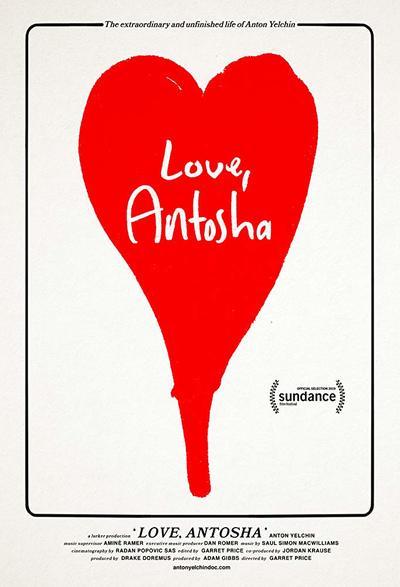 Anton Yelchin as Himself (archive footage)

Jennifer Lawrence as Herself

Chris Pine as Himself

John Cho as Himself

J.J. Abrams as Himself

Jodie Foster as Herself

Willem Dafoe as Himself

Kristen Stewart as Herself

Ben Foster as Himself

Zachary Quinto as Himself

Drake Doremus as Himself

Martin Landau as Himself (archive footage)

Jon Poll as Himself