When I told my wife that I had to watch “An Allison Janney Action Movie” for a review this week, she was a little startled (although interested in the concept, to be fair). I’m all for unexpected casting, and the truth is that Janney has the range to do just about anything, as she’s proven with her long, award-winning career. Therefore, it’s not surprising that Janney is easily the best thing about “Lou,” but watching this talented actress give so much to a movie that gives absolutely nothing back starts to get depressing. She’s constantly trying to pull “Lou” into more interesting territory, but the clunky filmmaking and silly script keep pulling in the other direction, with her talented co-stars Logan Marshall-Green and Jurnee Smollett stuck in the tug-of-war.

In what’s sort of a gender-swapped “Taken,” Janney plays the title character, a loner in a remote area of the Pacific Northwest in the 1980s. The film opens with Lou in a dark place. She kills a deer to establish her tough guy bona fides for the audience, withdraws all of her money, and writes a mysterious letter to someone about inheriting her home. She slugs some bourbon and prepares to take her own life when a woman renting a home nearby bursts through the door. It’s Hannah (Smollett), and her daughter Vee (Ridley Asha Bateman) is missing. Oh, did I mention a storm is coming? It’s about to get ugly outside and there’s now a missing girl.

Hannah knows who took her daughter—her ex-husband Phillip (Logan Marshall-Green), who we meet beating and killing a man who was silly enough to pick up a hitchhiker. It’s revealed that Phillip was not just an abusive husband to Hannah but faked his own death so he could get to his daughter under the cover of being presumed dead. Phillip is not your ordinary sociopath—he was a special forces soldier, and he even brought along a couple of his buddies to help with the kidnapping. All of them underestimated Lou. Of course.

Once Lou and Hannah get out into the torrential rain, “Lou” should have had momentum as a survival thriller. And there’s a great action scene in a cabin wherein the title character unleashes her training on a couple of dudes who don’t see it coming. With some tight fight choreography that Janney completely sells, I was ready for the film to build from there. And then it just stalls out.

A ridiculous twist doesn’t help. Without spoiling, “Lou” has one of those suspension of disbelief character connections that requires robust writing and direction to push through it. When a movie takes a sharp, unbelievable turn, viewers are willing to set aside skepticism if the story keeps them entertained. But “Lou” can’t manage this trick, allowing us to question the logic of it all in a way that makes the emotional scenes later feel hollow. The minute you start asking whether or not someone would make that choice in a movie like “Lou,” it comes apart.

Credit to Janney for never giving into the idea that Lou has to be likable. She’s a suicidal killing machine. If anything, I wanted the film to lean into her cynicism and nihilism even more but was impressed that Janney never softens her edges. She seems to be the only person involved who understands that this movie needs to be a no-fat, no-frills thriller. Her co-stars, the usually reliable Marshall-Green and Smollett, don’t fare as well with the former turning the crazy dial up too high and the latter being given almost nothing to play beyond panicked mother.

Action movies that reshape the expectations of actors known primarily for drama can be a blast. I loved what Bob Odenkirk did in “Nobody,” for example. And Allison Janney proves with “Lou” that she could carry an action movie. If only she got one worth carrying. 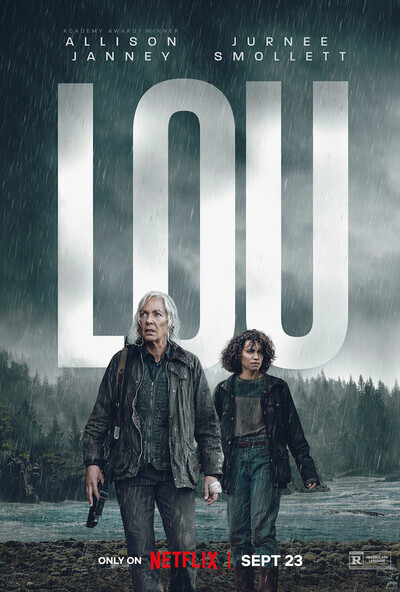