The mental health drama “Lost Transmissions” sadly only begins and ends with aspiring songwriter Hannah (Juno Temple), and is otherwise about Hannah’s schizophrenic friend Theo (Simon Pegg). Which is only disappointing because it’s hard to fully appreciate Hannah’s relationship with Theo, the latter of whom runs away from Hannah whenever she tries to get him the care he apparently needs. There’s a fair chance you’ve been, or had a friend like Theo, somebody who is so mentally and emotionally unwell that they don’t understand why they need therapy, medication, and/or hospitalization. It’s also hard to know why Hannah sticks with Theo in writer/director Katherine O’Brien’s drama, even if you know that “Lost Transmissions” is based on what happened to a friend of hers.

Unfortunately, the worst parts of “Lost Transmissions” are the early scenes where Theo’s friends talk about the emotional ties that previously bound them to him. These supporting characters are not very sympathetic because they’re either talking too much or not doing enough to show us what motivates them. So it makes sense that Hannah is underdeveloped, because so is everybody else in O’Brien’s movie.

O’Brien’s protagonists only seem to exist to push Theo from one confrontation to the next, as we hear in drab, mystifying expository dialogue when Hannah talks with Theo’s friends about staging an intervention, stuff like "You know, he says the same things when he's normal. He’s so funny. It's just when he's off his meds, he means ... all of it." In another scene, Theo’s long-suffering friend Angus (Jamie Harris) complains bitterly to Theo, who makes a scene when he’s dragged to a mental hospital: “Where'd you go, Theo? The Theo I'd know would never say anything like that.” Mind you, Angus yells this at Theo right after he tells Hannah that he can’t care for Theo because he already did that two times before, and doesn’t want to subject his new girlfriend to the worst of Theo. So, to recap: Angus knows how badly Theo behaves when he’s at his worst, but somehow doesn’t understand why he’s ranting that nobody cares for him, their timeline is breaking apart, and that he needs to reunite with the “Princess of Time”?

Here’s a clue: Theo refuses to take his anti-psychotic medication, but does love to self-medicate with magic mushrooms and other psychotropic drugs, as one of Theo’s friends explains: “We’ve been through this so many times with him, and he still messes with his medication. I mean, who does psychedelics on antipsychotics?” Apparently not Theo, who takes more recreational drugs, and less prescription medication as Hannah chases after him, at the expense of her own budding career writing pop songs for airhead diva Dana (Alexandra Daddario). He inevitably and repeatedly escapes Hannah’s grasp, because the American healthcare system is so overworked and underfunded that they can’t care for high-functioning patients like Theo (on a more personal note: yup, this tracks). And, for some reason, none of Theo’s family members seem to care enough about him to personally fetch him wherever he is or make him accept their care.

Which leaves one to wonder: why does Hannah care so much about Theo? There are some hints early on in the movie: she takes medication, having suffered bouts of suicidal depression, and he likes her enough to ask her to record music for him. Because when Theo’s not raving about making “ripples” in the “timestream,” he’s a burnt-out music producer who’s well-connected and respected enough to put Hannah on the path to writing for Dana. Hannah’s own mental and emotional deterioration is also hinted at in a few scenes, like when she dilutes a carton of milk with tap water, or takes psychedelics with Theo. But these scenes don’t build to anything memorable, nor do they suggest Hannah’s bond with Theo is as great as his hold on her.

While Theo and Hannah’s codependent relationship is believable, it’s not revealing or well-represented enough to be compelling. One scene lurches into another, and most are filled with details that only repeat the same basic power dynamic: Theo is unwell, and only Hannah is committed to caring for him. So we follow her while she chases after him, never stopping long enough to talk about anything that he doesn’t want to talk about. I mean, I wish I could say that I’m glad that I got to see them play “I, Spy” on the car ride back from one hospital, but while I like both actors, I don’t like them that much.

Pegg and Temple’s responsive, well-attuned performances are actually the most frustrating things about “Lost Transmissions” since they’re good enough to make you want to care, even when their characters don’t seem to be worth caring about. Theo and Hannah may be recognizably human, but that doesn’t necessarily make them interesting. 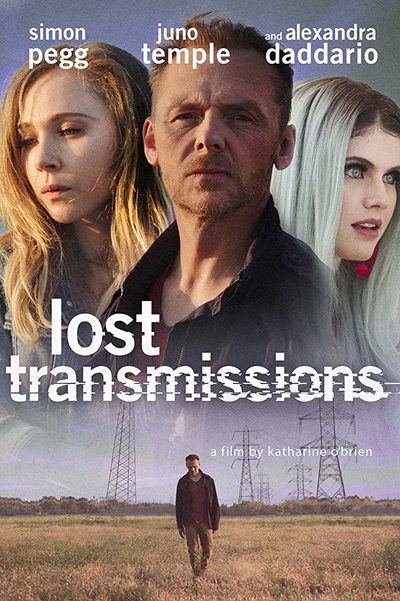