It’s hard to judge a drama that’s as ambitious and personal as “Loro,” an Italian character study about Silvio Berlusconi, given that it’s missing a little more than an hour of footage. “Loro” was originally a two-part, 3.5-hour drama written and directed by Paolo Sorrentino (“The Young Pope,” “The Great Beauty”), but has been released outside of Italy as one 2.5-hour feature. Complicating matters further: Sorrentino has essentially imagined what Berlusconi was thinking and doing in his private life whenever he wasn’t orchestrating well-documented public actions, as a square-up preface warns viewers: “The characters portrayed in the film and all sequences depicting their private lives remain entirely fictional, and the film is the result of the imagination of its authors.”

With that said: the 2.5-hour version of “Loro” (in Italian: “Them”) that IFC Films has released is strong, partly because Sorrentino’s film seems to be one that he’s been building up to for some years now. Depicted with appropriately oily charm by Sorrentino leading man Toni Servillo (“Consequences of Love,” “Il Divo”), the movie version of Berlusconi, a media mogul turned political tyrant, is like a combination of three characters that were recently played by Leonardo DiCaprio: Jay Gatsby, Jordan Belfort, and Howard Hughes.

In “Loro,” Servillo’s Berlusconi is a well-established manipulator who mounts a political comeback after being deposed in the 2006 general election. He says that he doesn’t like drugs, but he loves to be close to scantily clad women, many of whom are lured by the promise of “Wolf of Wall Street”-levels of cocaine and sex. Servillo’s character is frequently challenged, but rarely fazed; he may or may not believe what he’s saying, but that never concerns him for long ("The only thing that matters is that you believed me”). He thrives in chilly isolation, but is always peripherally thinking about fairweather accomplices, like billionaire banker Ennio Doris (also Servillo) and decrepit vizier Paolo Spagnolo (Dario Cantarelli).

Like Sorrentino’s other lonely monsters, Servillo’s Berlusconi is a contradictory figure: he’s insecure, but imagines that he’s above reproach, and therefore never slows down long enough to let criticism sink in. Still, his actions do frequently betray the split between how he sees himself—a good politician who is betrayed by a hypocritical, timid left-wing opposition—and how he behaves: like a more driven (and therefore dangerous) version of certain world leaders who shall remain nameless.

We spend most of “Loro” watching and waiting for secondary characters, like disappointed but savvy wife Veronica (Elena Sofia Ricci) and power-hungry would-be ally Sergio (Riccardo Scamarcio), to somehow make an impression on Berlusconi, but his grotesque carnival mask of a smile is never far from his lips. He sometimes pauses before inevitably turning a losing situation to his advantage, but nothing really penetrates Berlusconi’s well-fortified psyche.

“Loro” is consequently more focused on political scheming and back-biting that occur in Berlusconi’s orbit rather than crimes that he probably committed. There are some references to historical events, like when he promises to give new housing to the residents of L’Aquila after the devastating 2009 earthquake. But (and this is not a spoiler) “Loro” tellingly ends with a scene that serves as a tribute to the firefighters who did the hard work of salvaging L’Aquila: we see and hear them breathing heavily during a well-earned break as the city softly crumbles around them (the movie’s sound design team deserve a raise). This scene is a poetic rebuke to Berlusconi, and a rare moment where the movie’s relentless, perpetually shifting focus and pace aren’t determined by Servillo’s slippery character.

Still, “Loro” is often hard to get a firm grip on since Berlusconi’s moods and aims are so hard to read (sort of like Robert Altman’s “Secret Honor,” but not set after its subject’s career). Sorrentino has become an expert at this sort of power trip, but “Loro” feels different than his earlier projects, even if it shares many of the same preoccupations and themes. “Loro” is somewhat less whimsical—and definitely less meandering and provocative—compared to “The Young Pope,” but it’s almost as hide-bound as “Il Divo,” another breakthrough (for Sorrentino’s career) political drama that was also hobbled by his adherence to historical events (“Il Divo” follows parts of the career of former Italian Prime Minister Giulio Andreotti). There’s seemingly more at stake in both “Il Divo” and “Loro,” and that makes Sorrentino’s style a little less bold and imaginative.

However, “Loro” feels like the work of a more mature artist. Sorrentino knows exactly who his Berlusconi is, and, with the help of Servillo—who delivers a characteristically impressive performance—manages to make the former Prime Minister’s total lack of introspection seem ironically revealing. Ecco Silvio: pathetic, alone, indestructible. 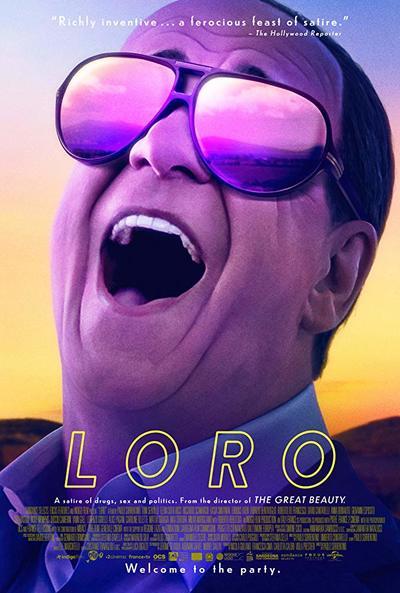