The inspiration for "Long Way North" is presenting female empowerment as an adventure, focusing on one budding explorer in her journey towards independence. In 1882, a young woman named Sacha (voiced by Christa Théret) wonders about the fate of her explorer grandfather Oloukine, who left for the North Pole on an expedition with his iconic ship the Davai and never returned. The story around St. Petersburg goes that he traveled a certain course to an ultimate doom, but Sacha now believes he went a different route, and could still be alive. There's a reward for finding the Davai, but she is more focused on rescuing a person who deeply inspires her.

Sacha seeks help from the men of power near her, initially attempting to navigate through what they want from her. At a ball hosted by her father in honor of the prince, she uses the pairing with the slimy piece of royalty to see if he’d be interested in funding a rescue mission, but her agency so insults him that he storms out, embarrassing her father in the process. With everyone telling her to drop the idea and hinting that she should focus more on her relationship status, she leaves in the middle of the night with a pair of valuable earrings, which she hopes to use as payment to get on a ship towards the North Pole.

Her entitled perspective of somehow easily finding passage after running away is challenged by the selfishness of others. But as strangers either take advantage or support her in different ways, the story becomes grounded in acts or failures of compassion that we experience day-by-day. Armed with new perspective, Sacha is eventually able to convince a crew of men, including the tough captain Lund (voiced by Loïc Houdré) that they should help her seek the Davai, convincing them with the possibility of reward money. She's initially treated as a complete outsider, even though she knows the possible course to the ship, but is welcomed when she can finally display her skills.

Though Sacha is how we get into the story, and it is intriguing to see her personal journey, the odyssey of the crew proves most narratively gripping, which starts after a slow 30 minutes into an 80-minute movie. But when "Long Way North" does get on the water and then into the deadly ice, there are grand moments of adventure. A large ship, a brutal frost, and the uncertain fate of Oloukine generate some needed narrative tension. Especially with the movie's thunderous sound design, there are a few gripping sequences of action involving a ship fighting against mountains of ice.

This French animated film (available in French with English subtitles, as I viewed it, or in English during its theatrical release) is directed by Rémi Chayé, who previously was an assistant director on the Oscar-nominated animated film “The Secret of Kells.” “Long Way North” is a different vision, using clear-defined colors, shapes and shadows for hand-drawn beauty, giving the film a bold, intricately-cut-construction-paper look. Especially as the characters are surrounded by ice and cold, the stark white images prove simple yet expressive.

In the case of the narrative, that stark attitude doesn’t bode so well. While its tone can be ambitious, almost turning a PG-rated animated tale into a Herzogian life-and-death pursuit, the characters don’t have the nuance despite the film’s direct interest in empathy. More than just an adventure, the story focuses on people helping each other, and how our individual paths are often directed by the support of others. But whenever Sacha interacts with a surly bar owner or scheming first mate, "Long Way North" too often treats compassion, especially between men and women, like an on-and-off switch inside a person’s soul. With its simplistic perspective, "Long Way North" risks being merely a nice gesture instead of a poetic, ice-breaking guide that points towards progress. 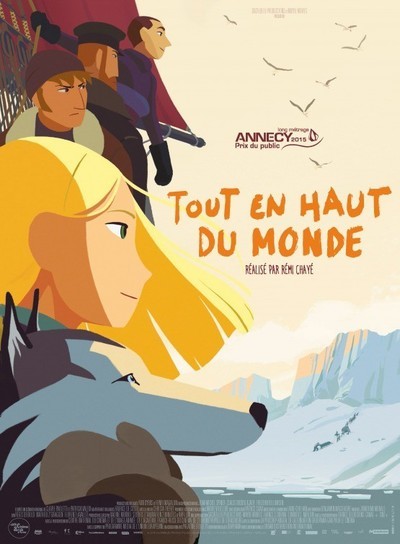 Rated PG for some peril and mild language.