All the way back in 1982, a smartass post-punk band from Milwaukee called Couch Flambeau did a song called “Mobile Home” in which the singer expressed his desire to purchase same, then boasted “gonna buy a broken Big Wheel/to put in front of my mobile home.” A cruel line, but funny, because it seemed true. At the time. I mention this because the line went through my head just now, watching my first new movie of 2015, “Little Accidents,” a drama set in American coal country which, in going about its business establishing place, contains several shots not quite of a broken Big Wheel sitting outside of a mobile home, but close enough.

Is this a case of “plus ça change” etc. with respect to the mores and décor prerogatives of the rural poor of the U.S., or an indication of the paucity of imagination on the part of the filmmakers? A little of both, I guess. Written and directed by Sara Colangelo, here making her feature debut, “Little Accidents” is quietly earnest, handsomely produced, and too dramatically inert and dogged by the commonplace to make much of an impact beyond conveying the dreariness (as opposed to the dread) of life in a coal-mining town. Shot in one such actual town in West Virginia, the film presents numerous striking images of natural beauty (Rachel Morrison is the cinematographer), which don’t rouse the movie from its narrative torpor. “Little Accidents” begins by following miner Amos Jenkins (Boyd Holbrook) as he rides the mine railway into another day on the job, all good old boy exuberance. The movie then cuts away to some time later: Amos is the only survivor of an accident that killed ten men, and he sits, cowed and cloudy, in front of questioners, testifying mainly to his lack of any memory of the events that wounded him.

It’s soon clear there’s much at stake, and that Amos is under all sorts of pressure. The movie loops in a narrative involving the teenage son of one of the mine’s victims, another teenager who belongs to one of the mine’s supervisors, and the lonely, soon traumatized wife of the supervisor, Diane (Elizabeth Banks). In a woodland conflict, the mine disaster yields another victim, albeit indirectly and, again, by accident. A child is presumed missing, but the audience, and another child, share the terrible knowledge that he is not. And so things turn for the worse.

You might not guess that two of the most tormented adult characters in this scheme wind up romantically involved, but if you don’t, in a way my hat is off to you. While the movie does all of its characters the favor of not condescending to them or their perspectives—a Bible Study group that might have been played for snickers is accorded, at the very least, a neutral view—its strategy of withholding both particular characters and information about their actions (the mine supervisor played by Josh Lucas doesn’t show up until a half hour or so into the picture), while perhaps looking attractively, insinuatingly oblique on paper, has on the screen the general effect of blunting potential emotional impact. While the players do their level best—lead-for-all-intents-and-purposes Holbrook over-indicates like crazy in his early scenes but eventually settles into his role enough to generate some sympathy—the clichéd solemnity of almost each and every scene (the music score by Marcelo Zarvos, replete with single piano and violin notes that strive in their perfect isolation to connote extreme poignancy) and the predictability of the action put me in a bind; as much as my conscience wanted to empathize with the characters, my taste only wanted to be rid of them. 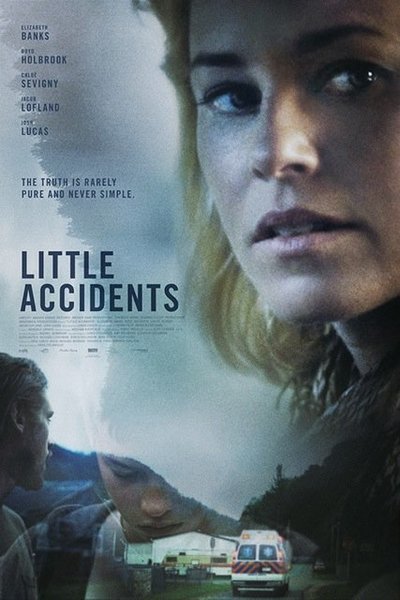