“Lights Out” began life as a three-minute short film by David F. Sandberg that was short on such elements as narrative complexity, character development and memorable dialogue (I don’t recall a single word being spoken) and long on coming up with more big jolts than would seem possible in such a short running time. It got no small degree of attention and Sandberg was given a chance to expand the short into a full-length feature, putting it in such esteemed genre company as the original “When a Stranger Calls” and “The Babadook.” In the cases of those works, the filmmakers found ways to expand on the original shorts that were clever, dramatically interesting and very, very scary. The problem with “Lights Out” is that while Sandberg is good at creating “BOO!” moments—those instant shocks where something pops out of nowhere and scares the bejeezus out of everyone—they're deployed in the service of a story that has little to offer otherwise, and begin to lose their effectiveness after a short while.

As was the case with “When a Stranger Calls,” “Lights Out” begins with a sequence designed to replicate the original short. Taking place in a factory after hours, instead of an anonymous apartment, it begins as an employee (Lotta Losten, who starred in the short) sees a mysterious female figure in the dark that disappears whenever the lights come back on, and who suddenly gets a lot closer when they go back out again. This time around, however, she survives, while the factory owner (Billy Burke) winds up meeting a gruesome end. Just before his demise, however, he was on the phone with his young son, Martin (Gabriel Bateman), talking about how mentally disturbed mom Sophie (Maria Bello) has apparently gone off her meds and seems to be talking to an imaginary friend named Diana. A few months pass and we learn that Sophie has gotten worse, and her conversations with Diana are so unnerving to Martin, not to mention all the attendant weird noises and scratches, that he can no longer sleep through the night and has been conking out in the middle of the school day.

When the school nurse cannot reach Sophie, she contacts his stepsister Rebecca (Teresa Palmer)—whose own dad disappeared mysteriously years before and who has been estranged from Sophie since abruptly moving out a few years earlier. When Martin mentions Diana, she recognizes the name from her own traumatic childhood years and tries to have Martin stay with her. That doesn’t fly with Sophie, and after she reclaims Martin, Rebecca tries to get to the bottom of who or what Diana might be and what it has to do with her family. Without getting into too much detail, she is now a creature who can only attack in darkness and who cannot be around any sort of light. After a couple of Diana attacks, Rebecca, with the help of amiably dopey boyfriend Bret (Alexander DiPersia) and Martin, decide to hole up in Sophia’s house, lighting up the entire place in the process, in order to get her to start taking her medication again and seek treatment for her instability. Alas, Diana thrives when Sophia is at her most disoriented and begins knocking out the lights in order to get rid of the interlopers once and for all.

Although Sandberg is the director, the big behind-the-scenes name on display here is co-producer James Wan. His genre bonafides include the “Conjuring” and “Insidious” franchises, films that have largely eschewed the gory excesses of his breakthrough hit “Saw” in order to provide low-fi thrills more reliant on atmosphere, small-scale effects (like door slams) and things suddenly appearing from out of nowhere. When done properly, as was the case with the original “Conjuring” and “Insidious,” the results can be sensationally effective, like the best haunted house ride every created. Done wrong, however, and the results can be more like the sequels to “The Conjuring” and “Insidious”—increasingly tiresome efforts that continually try to wring additional screams out of material too familiar for its own good.

It doesn’t take a genius to figure out which of those ways “Lights Out” is headed after only a few minutes. Part of what made “The Conjuring” so good, for example, is that even though it was a spooky show at its heart, it still took the time to create characters that we cared about, develop a plot that didn’t completely strain the bonds of credulity and mix up the scares so that we didn’t know what to expect next. By comparison, this film has two strong actresses in Teresa Palmer and Maria Bello but then fails to ever come up with a way to make use of their talents. The story is kind of vague in the way that, despite plenty of exposition, it never quite figures out what Diana is supposed to be or what the extent of her powers are. As for the scares, there are a couple of effective shocks. But by the time it finally comes to a close (even though it only clocks in at 80 minutes, "Lights Out" still feels long), even the most jittery of moviegoers will find themselves feeling surprisingly calm and placid.

“Lights Out” has been made with a certain degree of style—enough to make you want to see what Sandberg might be capable of with a better screenplay—and it does contain one great moment that pays sly homage to the most famous moment from the classic thriller “Wait Until Dark.” For the most part, though, the film is just a tired tread through the usual elements, and while that might be adequate for those sitting at home on a Saturday night looking for a few cheap thrills on cable, it hardly seems worth the effort of going out to see. And yet, with a current dearth of fright films out there—with the exception of “The Shallows,” an example of a genre entry that managed to take a familiar premise and turn it into something fresh and exciting—there may be enough pent-up demand for a film of its type to make it a success and begin yet another franchise. If that is the case, here is hoping that the filmmakers figure out something clever to do the next time around. 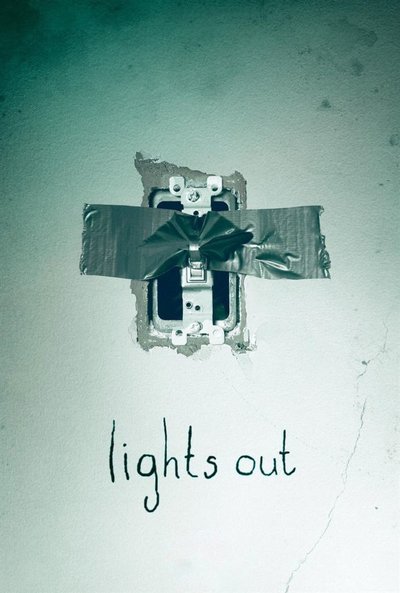 Rated PG-13 for terror throughout, violence including disturbing images, some thematic material and brief drug content.

Writer (based on the short film by)