By all accounts, British explorer and political officer Gertrude Bell lived a rich, textured life. She traveled extensively throughout the Middle East around the turn of the century, fell in love with the region, and was later recruited by the British Empire for war service at the outbreak of World War I. She eventually played a primary role in establishing the state of Iraq and the creation of the Iraq museum. Though frequently overshadowed by her colleague T.E. Lawrence, Bell’s unique efforts led her to become the de facto most powerful woman in the Empire, and her actions are still felt throughout history, for better or often worse, almost a century after her death.

Unfortunately, Zeva Oelbaum and Sabine Krayenbühl’s archival documentary “Letters From Baghdad,” an overview of Bell’s life through her own letters and communiqués as voiced by Tilda Swinton, doesn’t support the inherent complexity of her exploits or their consequences. Oelbaum and Krayenbühl adopt a snapshot approach to Bell’s career, shuffling quickly between her childhood to her travels in Persia to her work in the government and so on and so forth without allowing much room to take in the various events. Its chronological arrangement and neat chapter breaks might suggest a coherent paint-by-numbers retelling, but instead it’s a disorganized onslaught of primary source material that doesn’t so much shed light as it does simply exist.

It’s tempting to criticize “Letters From Baghdad” as merely an information vehicle, i.e. a documentary method employed by lazy filmmakers who believe that just communicating facts justifies a lack of any formal consideration on their part. However, Oelbaum and Krayenbühl’s use of Bell’s own photography collection and century-old previously unseen footage of the Middle East implies a sincere disinterest in avoiding that trap. But while some of the footage evokes the beauty of the region expressed by Bell in her writing, not all of it compels on its own. Moreover, it’s genuinely difficult to concentrate on the archival material when there’s so much other information communicated through the audio track. The archival footage clashes with the narration too often for the former to acquire the aesthetic weight it requires.

On the other hand, Swinton’s narration consistently excels, and she succeeds in bringing Bell to life, though it helps that Bell was an exceptional writer in her own right. Swinton conveys Bell’s zest for adventure and her honest love of the East, her emotional affairs with various men who pass through her life, and her opinions on everything from family life to Iraqi self-government. It’s a shame that "Letters From Baghdad'"s formal disorder often belies Swinton’s talent and Bell’s own words. Bell’s writing can’t exist on its own, it must also push the chronology forward, contextualize the time period, introduce the various real life figures, and so on. Though it would undoubtedly cheat the film’s conceit, it might have helped to have a stronger external framework so that Bell’s writing could shine through better. As it stands, it does so much work that it’s difficult to simply focus on the beauty of the narration or Bell’s words.

“Letters From Baghdad” is far from a total wash. The sequence where she assists in the establishment of Iraq generally captivates, especially when Bell must navigate her own ideals for Iraqi independence with the practical difficulties of establishing a government. Her various brushes with British patriarchy and their apathy towards a woman amongst their ranks has a genteel edge to it that sets it apart from other institutionalized sexism stories. On the whole, “Letters From Baghdad” feels like a missed opportunity. With a little more rigor, the film might have explored the various contours of Bell’s life with aplomb. Instead, it’s an overview that’s both insufficient and overstuffed, prompting more confusion than awe. 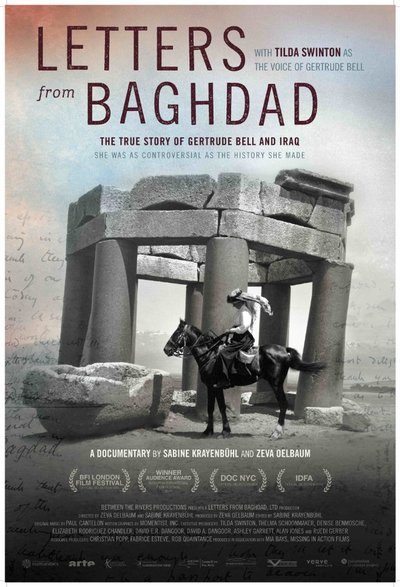