A good prequel or sequel to the proto-slasher "The Texas Chain Saw Massacre" is not unimaginable. True, series co-creator Tobe Hooper didn't quite nail it with his "The Texas Chainsaw Massacre 2," nor did the makers of surprisingly not-terrible "Leatherface: Texas Chainsaw Massacre III." These near-miss efforts make it tempting to recommend abandoning poor Leatherface, the hulking, mute, flesh-mask-wearing chainsaw buff. After all, Hooper and co-writer Kim Henkel's original film will always cast an appropriately large shadow over post-1974 horror.

If you've seen any of the previous incarnations of "The Texas Chain Saw Massacre" or any post-1974 horror film set in the countryside, then you know the world of "Leatherface." There's a dysfunctional family led by ruthless matriarch Verna Sawyer (Lili Taylor), and they bond by killing strangers. The film begins at the birthday party of poor pre-teen Jed (Boris Kabakchiev), now tasked with killing a random passerby. Jed doesn't kill his "gift" using the chainsaw that's put in front of him, but he also doesn't completely abstain from murder. That puts him at odds with Verna, and Texas Ranger Hal Hartman (Stephen Dorff), albeit for very different reasons: Verna wants her boy to kill, and Hartman would rather he didn't.

Fast-forward a couple years, when Jed is forcibly separated from his mama and placed in a mental hospital. The children at this hospital are re-named for their own safety, but it seems likely that Jed has grown up to become Bud (Sam Coleman), since he fits the psychological profile of a young serial killer: overweight, awkward, wearing coveralls, near-mute, terrified of women. So it's no surprise when Bud becomes, after a short period of heavy foregrounding, a supporting character in what appeared to start out as his own story. After all, what kind of hillbilly killer gets to be the star of his own film?

Despite this relatively convoluted plot, "Leatherface" isn't really a character-driven piece. Screenwriter Seth M. Sherwood instead delivers a series of opportunities for co-directors Alexandre Bustillo and Julien Maury ("Inside," "Livid") to make slick but indistinct tableaux of violence and suffering. Bustillo and Maury don't seem to care about their meat puppet protagonists beyond figuring out the best angle to film actors play-stabbing other performers in the neck, or determining how to undercut their tedious thriller's giddy teens-gone-wild mood with extreme close-up and sub-David Fincher orange-brown filters, as in the emblematically lifeless sequence set in a road-side diner.

The latter scene is especially disappointing since it never stops broadcasting the emotional divide between its overtly punch-drunk pacing and framing and its grisly content. How clever, you might think: a killing spree that's played out like an expression of amoral teenage rebellion. Surely you can't fault Bustillo and Maury for reveling in violence for its own sake, since they give us ample indications that violence is also a bad thing. Just look at that quick-cut to a victim's gaping eyeball as he bleeds out. Or dig the way that the filmmakers pause for a couple seconds to show another hapless patron begging for her life just before she's blown away. Surely this should exonerate Bustillo and Maury from killjoy charges of soulless exploitation!

Eh, not so much. Bustillo and Maury have, in the past, successfully delivered shocking, over-the-top gore without destroying their films' comparatively delicate atmosphere of dread. But in "Leatherface," gore, jump cuts and pretty-ugly images are the only things that reveal character. So when Leatherface does, eventually, start to become the famous sociopathic killer we know him to be, it doesn't feel like a loss of innocence, nor does it feel like a gross triumph for misunderstood misfits. It's just a trite ending to a introductory story that never really needed telling. 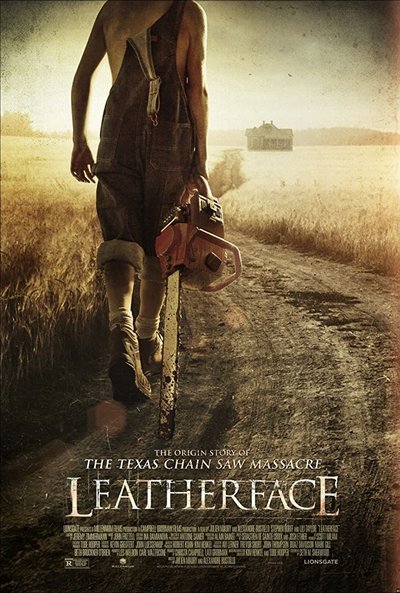