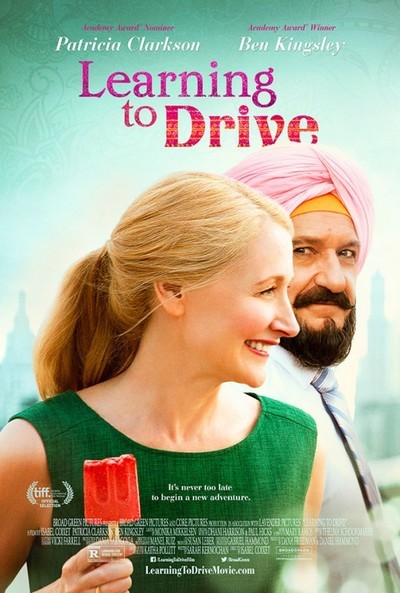 “Learning to Drive” is advertised as a two-hander about life lessons, which is problematic if you’ve cast a cynical, superior gaze toward this type of movie. People finding themselves through some kind of metaphor for perseverance is a topic ripe with hate-watching possibilities. But while several films of this ilk have certainly been worthy of scorn, several others have been very well done. What isn’t readily evident about this film is what makes it far less easy to dismiss: Its lead character doesn’t find herself so much as make minor modifications to an already found personae. The only major thing Wendy (Patricia Clarkson ) learns about herself is how she drives.

On the surface, “Learning to Drive” has elements of the romantic comedy it never becomes. The opening scene is the opposite of a “Meet Cute” between the main characters. We see Darwan (Sir Ben Kingsley), a Sikh who teaches people to drive in the morning and drives a cab at night. At his night job, he picks up Wendy and her soon-to-be ex-husband, Ted (Jake Weber). Their fight in the back of Darwan’s cab reveals the dissolution of a 21-year marriage due to Ted’s infidelity. In the ensuing mayhem, book critic Wendy leaves a manuscript of the book she’s reviewing in the back of Darwan’s cab. Darwan returns it, and upon seeing his student training vehicle, Wendy asks for his card.

Until this point, Wendy has no desire to drive. She lives in Queens and depends on the usual modes of transportation New Yorkers employ. When she needed a driver, it was usually Ted. Now that he’s run off with an author Wendy has always given rave reviews to (the scene where she discovers this is ripe with an uncomfortably quiet agony), she’s become a Miss Daisy without a Hoke. None of this would matter if her sister Debbie (Samantha Bee) and her daughter Tasha (Grace Gummer, Meryl Streep’s daughter) didn’t live well outside the New York City limits.

In order to spend more time with her daughter, Wendy takes Tasha’s advice and hires Darwan as an instructor. This leads to what can best be described as a “short-distance road movie.” The characters feel each other out while trapped in the claustrophobic confines of Darwan’s tiny vehicle, their personalities clashing in scenes of comic tension. Darwan maintains a terse, though polite and helpful demeanor, playing the straight man in this comedy duo. Wendy is far more animated and outspoken, even in moments where she’s too terrified to step on the gas.

Thankfully, “Learning to Drive” doesn’t treat Darwan as an Other whose sole purpose is to forward Wendy’s plotline. Equal time is given to his life, forming a counterpoint to Wendy’s experiences. He’s seen praying at temple, interacting with other Sikhs and taking care of his nephew, whom he promised his sister he’d look after in America. When his sister selects Jasleen (Sarita Choudhury)  as Darwan’s bride and sends her to America, “Learning to Drive” takes the time to show scenes of her struggles to adapt to American life and a husband who’s far from forthcoming about his emotions.

This is the rare film written, directed and edited by women. Writer Sarah Kenochan based her screenplay on an article in the New Yorker. Director Isabel Coixet reteams with her “Elegy” co-stars, placing them in areas of New York City rarely seen onscreen. The borough of Queens hasn’t had this loving a shout-out since “Coming to America”.  And Thelma Schoonmaker takes a break from the frenetic world of Martin Scorsese to lend her editing skills to this low-budget indie feature. Her work is especially noticeable in the film’s short, beautiful wedding sequence.

“Learning to Drive” proves that good acting can elevate even the most standard material. Clarkson makes Wendy more than a wronged wife; she has enough self-awareness to consider that she may not be completely blameless in her crumbling marriage. Her anger and melancholy are balanced with a dry wit that yields some big laughs. Kingsley complements her by giving Darwan a sweet vulnerability underneath his authoritative exterior. Thanks to their performances, Darwan and Wendy remain likable despite their occasional self-absorption.

This film is a little too on-the-nose in its automobile-as-freedom metaphors, but that didn’t hurt my enjoyment. I found myself rooting for this small, quiet dramedy to succeed. For the most part, it does just fine.

The RogerEbert.com Interviews of 2015

Being More Present: Patricia Clarkson on "Learning to Drive"