On the heels of Halloween comes "Last Love," the zombie of elderly grief movies. For 116 long, long minutes, we watch retired philosophy professor Matthew Morgan (Michael Caine) puttering about Paris after the death of his beloved wife Joan (Jane Alexander). He shambles around his large apartment, flirts with the idea of stamp collecting, teaches a bit of French, and takes up with a comely young French girl named Pauline (Clemence Poesy). It turns out that Pauline is a dance teacher who specializes in the cha-cha, but if you think that this means she will be leading Matthew out of his shell, think again. Director Sandra Nettelbeck films Pauline's cha-cha class like it's some kind of purgatory where older people are forced against their will to do steps in time to music.

For a film that is supposedly about life going on after the death of someone you love, "Last Love" has an uncannily undead sort of feeling, and that is partly due to Caine, who still has some of his movie star charisma but holds himself entirely back and aloof from his character. Matthew has several centerpiece monologues about his feelings on love, life and his late wife, and most actors of any age would tear right into them, but Caine recites them in a laid back fashion that steps right up to the line of seeming frankly disinterested but never quite crosses it.

This is a glacially paced movie, filled with sickly picture postcard imagery that seems designed to put you to sleep. The "sprightly" score is so basically retiring and uninvolved that it even seems to whisper, "Go to sleep…just go to sleep." There is never any hint of an inappropriate romance between Matthew and Pauline, yet she seems to always be around when he needs her, so much so that she repeatedly addresses this in dialogue without it ever being made clear why she starts to center her life around this withholding and somewhat charmless older man. In the first hour of the film, Matthew and Pauline have lengthy conversations that feature so many pauses that there are pauses within the pauses, and then pauses within those pauses, as they talk about their respective pasts.

Matthew tries to kills himself with pills, but his suicide attempt feels so half-hearted that it just seems like an excuse to finally introduce some new characters, his son Miles (Justin Kirk) and his daughter Karen (Gillian Anderson). What a relief it is when Anderson enters the film and takes the space and makes specific acting choices! She's like a breath of fresh air let into a darkened room, but she breezes in and then she breezes right out again, leaving Kirk to handle a seemingly endless series of listless arguments where he confronts Caine over and over again with charges of neglect, from every possible angle.

There's nothing at stake in this story, and Caine seems to know it, but he might at least have picked up the pace in some scenes, or gone off with Anderson to find a more suitable script with some life in it. 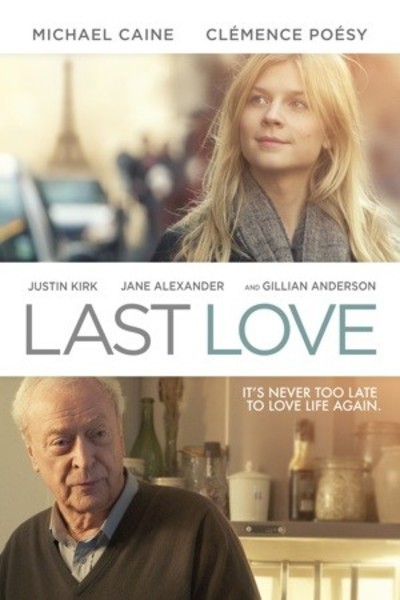