Curious, how in such a disappointing comedy, Bill Murray manages to dash off a hilarious warm-up. The opening scenes of “Larger than Life,” showing him as a third-rate motivational speaker, are right on target, with one zinger after another aimed at after-dinner speakers who promise to remake your life with touchy-feely slogans.

Murray plays Jack Corcoran, whose trademark slogan is “Get Over It!” He shows a banquet crowd how to unleash its hidden abilities by calling for volunteers to make a human pyramid. His clients include the American Motion Upholstery Assn. (reclining chairs), but his agents promise him some bigger fees, real soon. Meanwhile, he's preparing to get married, urged on by his mom (Anita Gillette), who has always told him his father drowned while saving helpless children.

Not true. A telegram arrives informing him of his father's death. “You mean I had a father all these years?” he wails, and his mother explains she left her husband because he was “irresponsible.” Maybe he was. The old man was a circus clown. Jack's inheritance includes a pile of bills and a trained elephant named Vera.

Most of “Larger than Life” involves Jack's attempts to move Vera entirely across the United States, to California, where the elephant will end up either as the victim of a sadistic animal trainer (Linda Fiorentino) or as part of a breeding herd being shipped to Sri Lanka by an environmental activist (Janeane Garofolo).

The formula for road movies, even those involving elephants, includes colorful characters encountered along the way, and two of the bright spots in a dim screenplay are provided by an old carny named Vernon (Pat Hingle) and his tattooed wife Luluna (Lois Smith). They knew and loved Jack's father, and teach Jack some commands which (sometimes) make Vera perform an amazing repertory of tricks. They also advise him to avoid the straight life and become a carny, not a rube.

Jack's adventures with transporting Vera include a train journey, followed by attempt to maneuver a semitrailer truck. And we meet Tip Tucker (Matthew McConaughey), a manic semi owner-operator with weird theories about everything in American society, especially school lunch programs. He pursues Jack and Vera cross-country after they misuse his truck. At the end of the journey, Jack has to decide between the circus and the zoo for Vera--and, in a way, for himself.

The materials are here to make a good comedy, I guess. The screenplay is by Roy Blount Jr., a funny writer. But the energy isn't there. Murray often chooses to play a laid-back, detached character, but this time he's so detached he's almost absent. He chooses to work in a low key, and the other actors, in matching his energy level, make a movie that drones instead of hums. Comedy is often about people who are passionately frustrated in goals they're convinced are crucial. Here Jack hardly seems to care, as he and Vera mosey along cross-country, bemused rather than bedazzled by their adventures.

The sad thing is, there are the fixings for another comedy, probably a much better one, right there in the opening scenes. Motivational speakers are ripe for satire. The bookshelves groan with self-improvement volumes, all promising to explain the problems of your universe, and their solution, in a few well-chosen rules. An honest bookstore would post the following sign above its “self-help” section: “For true self-help, please visit our philosophy, literature, history and science sections, find yourself a good book, read it, and think about it.” Murray's portrait of an inspirational speaker is right on target, and filled out with lots of subtle touches of movement and dialog, and there is humor, too, in the way his audiences will go along with his insane schemes (like the human pyramid), as if being able to balance three people on your back would solve your problems at work. This whole section of the movie is inspired; Murray should star in the movie of “The Dilbert Principle.” As for the elephant portions of the movie: They say an elephant never forgets, which means that I have an enormous advantage over Tai, who plays Vera, because I plan to forget this movie as soon as convenient. 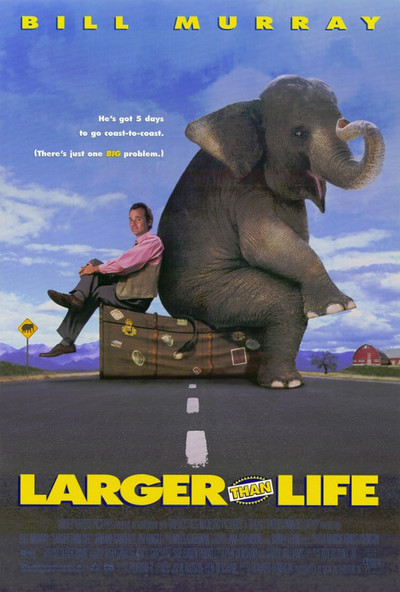