Meyer Lansky is perhaps the only iconic American gangster upon whom was bestowed the arguably dubious honor of being killed off in an American gangster movie before he himself actually died. I refer, of course, to Hyman Roth of Coppola’s “The Godfather Part II,” played by Lee Strasberg, who avers “I’m a retired investor living on a pension” before taking a couple of shots to the gut when entering the United States. Roth was, it is said, based on Lansky, a mob financier and gambling majordomo who always denied any connection to organized crime and died in bed, of lung cancer, in 1983, a decade after Coppola’s movie came out.

In “Lansky,” a misbegotten biopic co-written and directed by Eytan Rockaway, Harvey Keitel, now in his eighties, plays Lansky in his Miami twilight years in the early ‘80s. His performance is the only legitimate reason to sit through this tiresome, cumbersome treatment of the man and his world. Keitel is sharp, witty, ironical, knowing, all the things you want from the concept of an intelligent criminal in late-life-rumination mode.

The frame story couching Keitel’s work is problem number one. Rockaway gives us the stories of two men rather than the story of one: the other guy is a broke journalist named David Stone, whom Lansky has sort-of commissioned to write a book on him, to be published after his death. Stone is a character in the macho-journalist mode, which in cinema terms means he talks kind of like an idiot, not to put too fine a point on it. When he’s not on a pay phone making empty promises to his ex-wife and young daughter about alimony payments or money for braces, he’s gawking at the young woman in the bathing suit lounging by his motel pool. Stone is played by Sam Worthington; any assets he has as a performer are not brought forth in this role. In the exchanges between Lansky and Stone, Keitel might as well be talking to a wall, albeit a wall with a mustache.

These exchanges are alternated with threadbare period scenes in which younger Lansky figures out gambling, forms an alliance with Ben “Bugsy” Siegel, experiences the heartbreak of raising a disabled child, that sort of thing. These scenes are packed with a lot of capital-A Acting from John Magaro as Lansky, Shane McRae as Charles “Lucky” Luciano, and an especially hammy David Cade as Siegel. “The only thing Bugsy enjoyed more than killing was the ladies, or maybe it was the other way around,” Keitel’s Lansky recalls. Well, which was it?

In the meantime, Stone’s biographical efforts are watched by some FBI agents, who are frantically trying to capture the $300 million in assets they are certain Lansky has lying around somewhere. This money remains, in real life, a source of speculation. And why not? It’s a lot of money. These scenes are among the movie’s least credible; one office confab between David James Elliott, Danny Abeckaser, and James Moses Black feels like a scene workshop in which the players are trying to impersonate Rob Riggle, Al Pacino, and Bill Duke.

Never as giddily awful as “Gotti,” this movie suffers more from a case of what film critic Andrew Sarris called “Strained Seriousness.” Except the ostensible seriousness here never runs particularly deep. "Lansky" is for Keitel completists only. 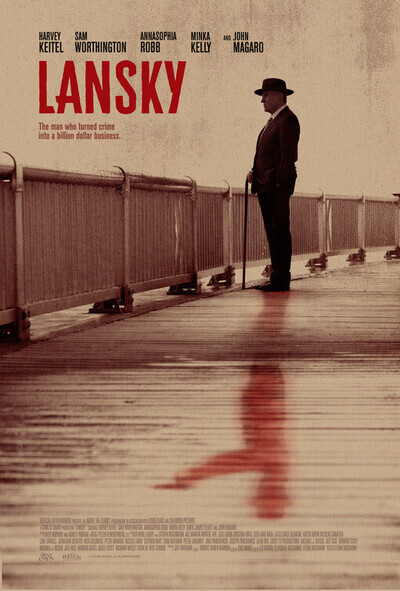