My wife and I have been watching “American Crime Story: The People vs. OJ Simpson” (second time for me, first for her), and I’ve been impressed by its depth and quality all over again. One thing that's notable on a repeat viewing is the ensemble performers who fell a bit under the shadow of Emmy winners Sarah Paulson, Courtney B. Vance, and Sterling K. Brown. In particular, John Travolta is fantastic, finding just the right balance of old-school bravado and increasing insecurity in his portrayal of Bob Shapiro. There’s a bit of Shapiro’s arrogance in Travolta’s turn as John Gotti in “Gotti,” but that’s all that it shares with the FX series. There may one day be a great movie made about John Gotti. This one ain’t it.

Directed by Kevin Connolly—yes, “E” from “Entourage” directs movies now—“Gotti” is a film without a voice. It pulls from pop culture representations of mobsters to create a Frankenmob movie. Jumping back and forth between eras of Gotti’s life, moving from his son’s perspective (it’s based on a book by John Jr.) to the old man’s, and cluttered with enough clichéd lines of dialogue to play “Mob Jargon Bingo,” “Gotti” has zero POV. Well, its POV is basically someone who watched too much “Goodfellas” and “The Sopranos,” and then saw a Discovery Channel special about Gotti that they barely remember.

The trend of the day may be to end biopics with photos of the real-life subjects of the film, but Connolly chooses to open with a montage of Gotti photos and clips, set to a new song by Pitbull, who contributes multiple songs, as well as some of his hits, to the movie. Because when someone thinks of John Gotti, they think Pitbull, of course.

“Gotti” then bounces around through greatest hits of Gotti’s ascendancy in the mafia, structured around a conversation an older Gotti is having with his son, who is considering taking a plea in a case that he’s currently facing. Dad is an old-fashioned mob boss, and the thought of taking a plea is just below considering ratting on the list of Cardinal Sins. You don’t give into the government. You always keep fighting. Never let them win. And Gotti notoriously beat so many charges that he became known as the Teflon Don.

How Gotti went from a soldier in the mob to the King of the organization is loosely sketched in over the course of “Gotti,” but it’s all just an excuse for the kind of awful mob dialogue that reminded me more of the satirical “Mafia!” then anything else. Gotti says things like “There is no choice—there is only what you do,” and speaks about manhood and duty so much that it becomes numbing long before it’s over. It just wallows in the clichés, and so this portrayal of Gotti never feels threatening, even when he warns someone that he will “park a bus up your ass fucking sideways.”

As if he knew there wasn’t really a movie here as much as some nice outfits and bad Joisey accents, Connolly layers his film with music choices, including James Brown, Dean Martin, The Escape Club, Duran Duran, and a lot of Pitbull. It’s a crutch of filmmaking to over-rely on music, and even the crutch here is annoying. It’s not just a movie with too many music choices, but the choices aren’t quite right either.

Gotti resided over a tumultuous time in the history of the mob, and how he got there and the way he wielded his power could make for an interesting film. It would have to be one that focused more tightly on a portion of his life, or possibly turned into a series. And it would have to be one that relied less on music, makeup, and clichés than “Gotti,” which never gets as deep into the life of its title character. He may have been a murderer, but even Gotti deserved better than this.

This review is based on the version of "Gotti" that screened last month at the Cannes Film Festival. 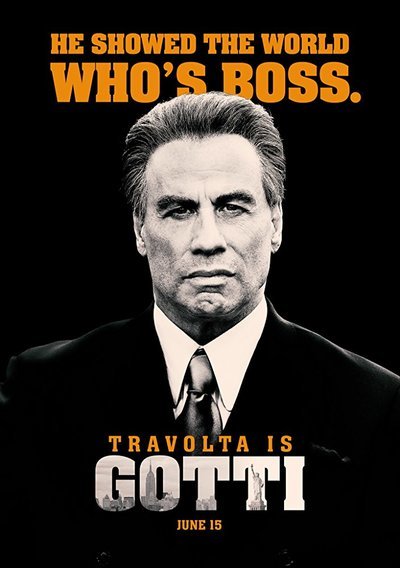