"Kurt Vonnegut: Unstuck in Time" is messy in the way that wakes for dear friends are messy.

Some speakers go on too long, and there are others that you may wish you'd heard from at greater length, or at all. And the raw sentiment coursing through every moment of the affair, however heartfelt, can be overwhelming, especially if you didn't know the deceased as well as the folks memorializing him.

The deceased here is Kurt Vonnegut, and the person who planned, executed and hosted this cinematic wake, director Robert B. Weide (a veteran documentarian and an Emmy-winning director for "Curb Your Enthusiasm"), was a friend of Vonnegut's throughout the final 25 years of his life. This movie, co-directed by Don Argott, runs over two hours. Thematic and structural ideas are introduced, nurtured, forgotten, then reintroduced awkwardly. Weide himself is a major character—as well he should be, considering that Vonnegut essentially made Weide his personal archivist, sending him letters and manuscripts and faxes and video and audio tapes, and this film is as much a portrait of a friendship as it is the warts-and-all record of a great writer's life—but sometimes the proportions feel off. When Weide disappears for long stretches, I don't know that it's exactly a slam to say that you don't miss him, because people are mainly here for Vonnegut, one of the most important American writers of the 20th century, and a fount of charisma even at his lowest depths of sour narcissism in the 1970s.

Vonnegut fans know that he specialized in slim, nimbly written books, with short chapters and short paragraphs that jumped wherever Vonnegut's consciousness happened to take him. "Unstuck in Time" lets us know that it is consciously modeling its structure on Vonnegut's writing, in particular his widest-read work, the nonlinear novel/memoir "Slaughterhouse Five," from whence the documentary's subtitle is drawn ("Billy Pilgrim came unstuck in time," it starts); and to a lesser extent, Vonnegut's late-career bestseller "Timequake," a fragmented, self-aware book that is partly about the difficulty of writing "Timequake."

There are also cinematic allusions to Vonnegut's literary alter-ego, Kilgore Trout, in the way that Weide and Argott and three credited film editors weave together the relationship between Vonnegut and Weide. Weide first meets Vonnegut in 1982 at age 23 after writing him a fan letter inquiring about the possibility of making a documentary about his life, and he holds onto that youthful starstruck quality even in reminiscences shot long after Vonnegut's death in 2007. Over time, the pupil gains the master's respect, to the point where Weide writes and coproduces a feature-length adaptation of Vonnegut's novel "Mother Night," starring Nick Nolte and directed by actor-filmmaker Keith Gordon, who as luck would have it played Rodney Dangerfield's son in "Back to School," a comedy in which Vonnegut played himself.

This may all sound as if it's articulated more cleanly and effectively than it is. The filmmakers have committed simultaneously and with equal enthusiasm to a couple of filmmaking approaches that are at odds. One is the detached, clinical-mathematical, unsentimental, science-fictional, time-tripping biography, a la "Slaughterhouse Five" and "Timequake," represented here by inventive cutting from image to image and idea to idea, sometimes lingering on signifiers of creative self-awareness. These include closeups of the timeline on an editor's computer screen, montages of Vonnegut doing or saying the same thing in different decades of his life, snippets of films based on Vonnegut's writing, and animated sequences modeled on Vonnegut's drawings, which were as distinctive as his prose.

The other approach is more straightforward: Weide and Argott are making a straightforward PBS-style documentary about an artist's life, supervised by a director and fan who knew him intimately, and tghat draws on footage ranging from childhood through old age. The latter might jump around in time in terms of the years in which it was created, but it ultimately tells Vonnegut's story in a far more conventional way that the movie promises to do in its opening minutes.

This is fine; in fact it's more than fine, because as Vonnegut and various experts on his work point out, Vonnegut remains readable and relevant in large part because he expressed himself in a direct way, drawing upon what's described here as a journalistic writing style. Correspondingly, the most moving scenes and moments in "Unstuck in Time" are unmannered accounts of events. These range in emotional character from elating (Vonnegut's commercial and critical success with "Slaughterhouse Five" after years of financial struggle) to vexing (after that success, he left his first wife, Jane, who'd been by his side during the lean years, moved to Manhattan, and married his mistress) to tragic (Vonnegut's brother-in-law dying in a train wreck just two days before Vonnegut's older sister died of cancer) to inspirational (Vonnegut unhesitatingly raising his late sister's four sons alongside the three kids he had with Jane).

All of this material is fascinating, and articulated in vivid detail thanks to Weide's trove of material. There are closeups of typewritten revisions of Vonnegut classics, each alteration indicated in pencil or pen, and letters and answering machine messages covering every imaginable life event. The filmmakers lay it all out so elegantly that whenever the movie seems to forget that it's also about Weide and suddenly interrupts the flow to insert a reference to one of Weide's own milestone events (such as his wife's own battle with a debilitating illness and his Emmy win for "Curb," which seems to be in there so that he can include Vonnegut's answering machine message congratulating him) it's awkward because Weide is clearly still grieving, too, and the viewer is torn between wanting to bear witness to Weide's miseries and triumphs and wanting him to get back to Kurt Vonnegut as quickly as possible.

There is, nevertheless, something to be said for a documentary that tries to do something different and perhaps impossible, even if it doesn't quite get there. And in the end, any flaws or missed opportunities are subsumed by the movie's sincerity and wealth of insight. Its analysis of the role that Vonnegut's World War II experience played in his demeanor as well as his fiction is fascinating and on-point, and the editors bring it all back at the end when Vonnegut, outraged by the second Bush administration's invasion of Iraq and weaponizing of patriotism, writes a series of columns for "In These Times" magazine that will ultimately be collected in 2005's "A Man Without a Country," arguably his last major work.

Weide himself comes across as a sardonic and compassionate witness and guide, often taking the piss out of his own reverence for Vonnegut just when things threaten to get a bit moist. The devotion he displays towards Vonnegut throughout the second half of the writer's life is as inspiring as Vonnegut's own high points as a human being. We should all be lucky enough to have a friend who will tell our story. 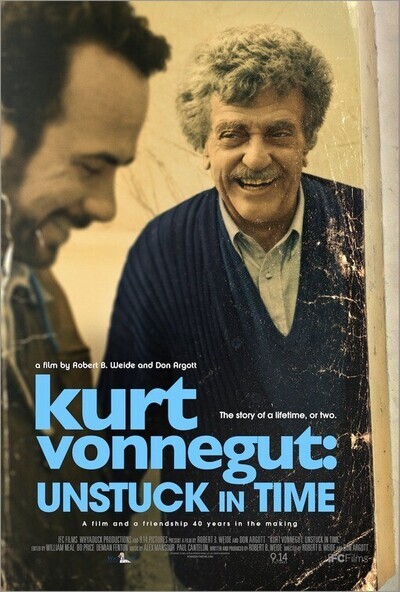 Robert B. Weide as Self

Sam Waterston as Self (voice)

Morley Safer as Self

Edie Vonnegut as Self

Bernard Vonnegut as Self (archive footage)