There is an enormous amount of pain within director Bernardo Ruiz’s “Kingdom of Shadows,” a mortified and outraged documentary about the inhumanity inflicted upon communities and families by warring cartels. The official numbers say that since 2007, 23,000 people have disappeared from drug war zones like Monterrey, Mexico, leaving their loved ones in a traumatizing limbo. Meanwhile, on the other side of the border, towns like Socorro, TX have families that are preyed upon to be gateways, the cartels offering a false sense of fortuity for men and women who may feel limited by legal opportunities.

And yet, the documentary is a hollow experience, emotionally stifled by its plotless nature and lack of any visual edge. It’s a well-intentioned film that has a lot on its mind but without a gripping way to convey its passion, even by volleying between three different people who have experienced the impact of the cartels first-hand.

Working with those whose loved ones have disappeared is the stalwart Sister Consuelo Morales. We see her talking to distraught families in Monterrey, Mexico, who march down the street with images of their friends and family on t-shirts and posters. Ruiz sporadically shows Sister Morales in action, opting more to paint a blunt image of a potential futility for these marches, especially when their loved ones have been missing for years, and the police force is known to be corrupt. There is one moment in which Sister Morales sits with a woman as she pleads to government officials for help, but it is cut with a bizarre, easy resolve despite the extreme emotions at the center of it.

On the other side of the border, there’s cowboy Don Henry Ford Jr., of Belmont, TX. He provides one of the film’s few perspectives from the criminal side, nonetheless as a good ol’ boy who found himself becoming a drug mule in the 1980s, a cartel era that he states wasn’t as violent as it is now. Mirroring the documentary itself, Ford is not exactly the most charismatic presence, even when Ruiz has him staring straight back at us in his testimonial, talking about how his smuggling plane was caught by the feds. As Ford becomes more storyteller than anything else, Ruiz is stuck in how to present him, using out-of-context old photographs as a generic B-roll; even home video of Ford going through Mexico, or a side conversation with his reasonably disturbed son, provides nary a pulse.

Ruiz’s most curious and therefore most underwhelmed subject is Oscar Hagelsieb, of Socorro, Texas. The son of illegal immigrants, he grew up among people who did business with the Mexican cartels, and saw how the they provided a mirage of opportunity to family and friends. In one lifetime, he has worked at border patrol, in the Middle East (which he says feels safer than Monterrey), undercover in the drug cartels, and now heads a Homeland Security narcotics division (Ruiz’s editing makes that last bit a big, somewhat cheap reveal). Even though Hagelsieb could lead his own reality show, or inspire some “based on a true story” studio project, he’s another talking head who merely distributes extremely sobering information about the cartels. Even footage of Hagelsieb’s undercover work contextualizes little tension to this fascinating, very hardcore human being.

Interspersed between these three subject observations is a jumble of information and tough anxieties about various elements in the cartel process: A gang member speaks openly behind a ski mask about “narco kitchens,” where bodies are destroyed to become unrecognizable. A history lesson is provided about the war between the warring Gulf Cartel and Los Zetas, and how the military and police are often corrupted by them, leading to the creation of a new state police force, Fuerza Civil. Human beings become ghosts, communities are destroyed, but “Kingdom of Shadows” hardly allows the space for these stories to resonate.

In its last moment, after sometimes putting his audience up-close with his three reoccurring subjects, Ruiz gives close-ups to the hardened faces of the men and women whose loved ones have disappeared. For this documentary, it’s a frustrating moment all its own. “Kingdom of Shadows” may yearn to be an emotional experience, but with its ineffective and scattered storytelling, it can only be an informative doc, albeit about unmistakable issues (the villainy of cartels, the horror of disappearing people), punctuated with its blunt demand for humanity. 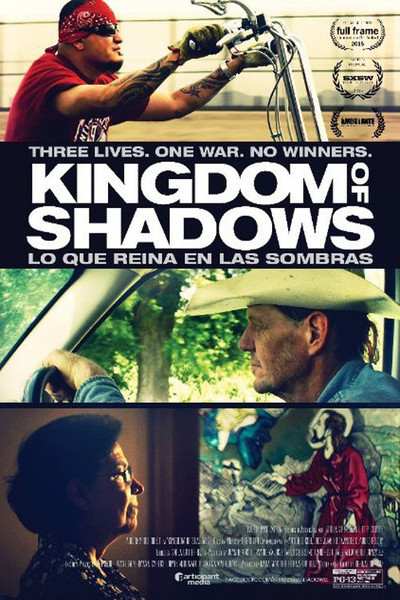