King in the Wilderness

In one of the most moving pieces of footage from Peter Kunhardt’s new documentary, “King in the Wilderness,” opening in select theaters today and premiering on HBO on Monday, we see Dr. King being thrown a surprise birthday party by his friends and staff, many of whom were concerned about his mental and emotional well-being. The intimate black and white footage shows a bashful and charmed King being sung to and then being given gag gifts like a can of shoestring potatoes (“We thought you’d be strung out on shoestrings! So, when you go to jail, here’s some shoestring potatoes!”) and a tin cup for pretend donations to President Lyndon B. Johnson (“It says, ‘We are cooperating with Lyndon Johnson’s War on Poverty. Drop coins and bills in the cup!”).

This was his last birthday, a brief moment of light during one of the most stressful years of his life. Though King’s powerful oratory skills often made him seem larger than life, the King we see in his new documentary is almost shockingly human. Throughout Kunhardt’s film we are ushered into private moments like these in order to see a nuanced portrait of a man who remains steadfast in his principles, even as his heart is breaking. As the film charts the last three years of his life, we see a world where King is increasingly dismayed by the brutality of the world around him. We see younger civil rights leaders increasingly claiming that violence must be met with violence. We see the Vietnam War continue to wage on and on without an end in sight. We see seemingly quieter acts of violence too, such as the way that communities of color and the poor are continuously neglected, and the way that King himself is treated by an establishment that fears heightening racial tensions.

“King in the Wilderness” is a quiet and understated film, which lingers lovingly on its subject. We see Dr. King’s famous sermons at the pulpit, and also see him sitting quietly with family and friends. Regardless of whether King is performing to a crowd or sharing a private moment with someone dear to him, his gentle and determined spirit permeates every scene. This is true in the actual found footage, as well as moments that capture his friend’s recollections about the kind of man he was. These interviews convey King’s private hopes, as well as fears, frustrations, and doubts. We learn that King had a great sense of humor, worried about his ability to be a good father and husband, and wrestled with his ability to lead under the threat of violence to his own person. At one point, he develops a tic when he speaks, which eventually resolves on its own. When his friend asks about it, he explain “I made my peace with death.”

In his Director’s Notes, Kunhardt remarks that,

To many Dr. King is a modern-day prophet, canonized and exalted. To others he’s an obligatory chapter in a history textbook, whose nonviolent teachings feel archaic and naïve in our increasingly tribal society. The truth of his courage is much more mundane and more remarkable.

In Kunhardt’s film, the embrace of quiet, ordinary moments not only aids in the illumination of King himself, but also in the America in which he preached. The camera lingers on the normalcy of city streets, suburban neighborhoods, and churches, juxtaposing these peaceful places with chaotic footage from the '60s: loud, chaotic, taken with shaky cameras, or immortalized in static photographs. We see riots and police brutality and the Ku Klux Klan. We see little white boys cheerfully holding up swastikas and Confederate flags and impoverished black mothers holding their little babies tight. We see broken glass and buildings on fire and the insides of jail cells. Later, when King is shot, we see the camera linger over a freshly made hotel bed, a newspaper folded neatly on top of it, a representation of King’s final moments that is more unsettling than the sight of blood.

Many of the images of violence that we see in “King in the Wilderness” seem as though they could be taken today and it’s depressing that 50 years after Dr. King’s assassination the country seems just as polarized and violent as it did in the Civil Rights era. Yet, Kunhardt’s film is less an indictment of our current culture than a call to action and a radical embrace of the values of nonviolence that Dr. King preached throughout his short, purposeful life. Dr. King’s dream may still be out of reach, but this humanizing portrait of his legacy disarms as much as it inspires; it reminds us that we should not simply remember the heroes who changed the course of history but strive to live on and fulfill their legacy. 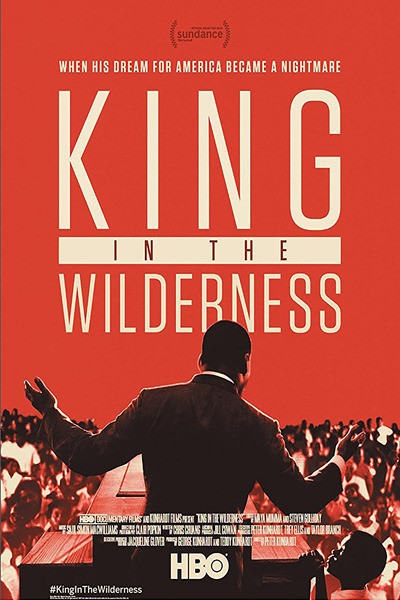