Reflecting on Nick Berardini's “Killing Them Safely” on the night of Chicago protests for another death of a civilian due by excessive police force, the tension between civilians and law enforcement remains thoroughly despairing. Both sides, regardless of power, have a very human but potentially destructive fear. In the scenarios where a police officer may initially desire humanity, there have to be better methods for cops to properly engage civilians. Berardini’s doc vigorously proves that despite their marketing, Tasers are not the answer. They are only means to a bigger, deadlier problem.

In his directorial debut, Berardini sets his sights on the billion-dollar Taser company, and the men behind it (brothers Rick and Tom Smith) who repeatedly claim that they have changed the world for the better. Taser is the only company in the world that creates these conducted electrical weapons (or CEWs), as currently used by 17,000 police forces throughout the world. For their police pièce de résistance, Tom and Rick Smith upgraded Jack Cover’s original 1969 Taser to become something that doesn’t just shock the human body, it practically stops it with 50,000 volts. When Taser’s X26 took off in the early 2000s, it became a phenomenon for the company.

But then, very human elements began to unravel the Taser's perfect facade. As detailed in Berardini's collected news reports, the Taser was revealed to be a type of police crutch, an easier option than physically detaining someone (like a six-year-old at school, or a 56-year-old in a wheelchair as in 2006). Despite its intent as a self-proclaimed, "non-lethal" instrument meant to snuff a disturbance, Tasers aided excessive police force to the number of 300 Taser-related deaths by 2008. The power of “Killing Them Safely” is that it brings to light some of these cases that may have been swept under the rug. It heroically questions that even if the Taser doesn't always kill, why should even one unfortunate loss be acceptable?

Throwing Taser’s poster catchphrase back in their face, Berardini has essentially made a film to “protect the truth and convict the guilty.” Though lacking personality in its indictment, “Killing Them Safely” is armed with vigorous detail and horrific footage of Tasers taking lives on camera, played out in full. A particularly disturbing episode involves the famous case of Robert Dziekański, a frustrated Polish immigrant who was tasered to death in a Canadian airport by Mounties untrained in the proper Taser use. Another involves the death of 23-year-old Stanley Bachtel, who was tasered to death after being pulled over for speeding and freaking out about how the cops were treating him. Like many others, he was shocked into a state of cardiac arrest.

“Killing Them Safely” can be dry, especially when its second half turns to the medical investigations against Taser and the Smith brothers by prosecuting attorneys Peter Williamson and John Burton. The often jaw-dropping, scandalous nature of Taser's defenses is downplayed, despite the can of worms they offer to the current state of police business and even gun control ("Tasers don't kill people, people kill people"). By no coincidence, “Killing Them Safely” doesn’t create compelling characters out of any of its reoccurring talking heads, despite their interactions with the Taser enterprise. Even Berardini’s fervor to burn Taser to the ground with a documentarian’s vengeance comes from an unknown place, an incomplete big picture created in the process.

“Killing Them Safely” is valiant at damaging a Goliath business where it counts, decimating the purpose and potential of a golden product. Berardini has lots of content here to break the delusions of those who want to believe the peace behind Tasers, or not question the motives within those who hold authority. Especially for those in law enforcement, “Killing Them Safely” should be required viewing before taking taxpayer money to invest in their next attempt at serving and protecting their fellow man. 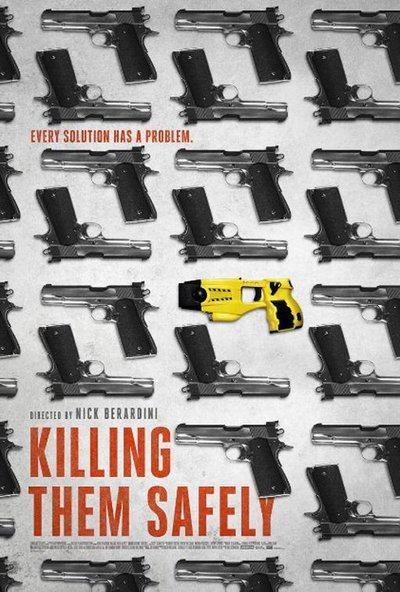