The real test for a first-rate actor is whether they can be good in a bad role in a bad film. Anthony Hopkins, maybe our greatest living actor, has passed that test many times over the years, and in “Kidnapping Mr. Heineken” he is at it again. The filmmakers were able to pay his fee, and so Hopkins shows up for another rubbishy, misbegotten project and shames the whole enterprise with his open and volatile face, his incisive voice, his mere ultra-soulful presence.

Hopkins plays Freddy Heineken, the beer tycoon who was kidnapped in Amsterdam in 1983 and held for ransom. “Oh, what are you doing?” Hopkins’s Heineken asks his abductors, in a rather bored tone of voice, as they spirit him and his chauffeur Ab Doderer (David Dencik) into a waiting van. At first, you might think that it is Hopkins himself who is bored with this pedestrian film, but that boredom in the tone of his voice is actually part of his character here.

After he has been confined and chained in a soundproofed room, Hopkins’s Freddy addresses one of his kidnappers with smooth demands for a bathrobe and a decent chair. In further meetings, Freddy says he doesn’t like the music that is being played on a speaker and requests some Schubert instead, and he wants some inexpensive Chinese food instead of the ham sandwiches that he’s been getting. Freddy takes command of the situation as a kind of CEO of his own kidnapping, and Hopkins finds a somewhat amusing way of playing his incongruous authority. Trying to entice one of the kidnappers, he offers a life of wealth and blondes. “No?” he asks. “Are you gay or something?” And then he gives him a little air kiss! When Freddy finally calls his kidnappers morons, it comes as a relief, because they really are irritatingly dopey, making mistake after mistake but getting away with them.

The major problem among many in the unfocused “Kidnapping Mr. Heineken” is that very little thought seems to have been given to how this story should be told or why it merits telling. Most of the movie is about the five kidnappers, who are led by Cor Van Hout (Jim Sturgess), and though they all get a lot of screen time they are barely characterized. After getting turned down for a loan from a bank, Cor and his cohorts violently evict some punk squatters from a building, and it’s hard to tell during this eviction fight scene just who we’re supposed to be rooting for; at one point the camera catches Cor smiling at his friend Willem (Sam Worthington), so it would seem we are supposed to view these guys as misguided but likable badasses (no such luck). When Cor talks to his gang about taking the risk of a kidnapping for a big payday and mentions that he’s been planning something like this since they were kids, it doesn’t ring remotely true, and when the guys rob a bank in order to finance their kidnapping scheme, it becomes clear that director Daniel Alfredson is only interested in shooting rushed chase scenes without context or motivation.

The five guys who do this kidnapping of Mr. Heineken are so inept that they seem like they should be in a slapstick comedy, yet the film doesn’t pursue the comic aspects of this case at all and tries instead for very low-level action suspense. (The only outright joke here is when a bartender says he thinks Budweiser is behind the kidnapping, hardy har har.) The Five Stooges at the center of the film leave a copy of their ransom note in a copier, don’t know whether one of them left fingerprints on the note, can’t decide why they grabbed the chauffeur along with Mr. Heineken, and are so dimwitted that they seem to have trouble walking and talking at the same time.

While the kidnappers brood and yell at each other, we are left to wonder when the last time was that Hopkins was in a decent film. Is it 10 years now? 20? Difficult to say, but his lustily indiscriminate career is filled with movies like “Kidnapping Mr. Heineken,” which buy his talent and his star quality and leave him stranded. This one even betrays the little character sketch he’s doing by having Mr. Heineken go mad for only one scene in a way that makes no sense for the character Hopkins has been developing, and this random mad scene is intercut with another random car chase scene. It’s high time Hopkins stopped wasting his talent on films like this and got back to the level of work that he achieved in the early 1990s, when we were left hanging on his every unpredictable pause. 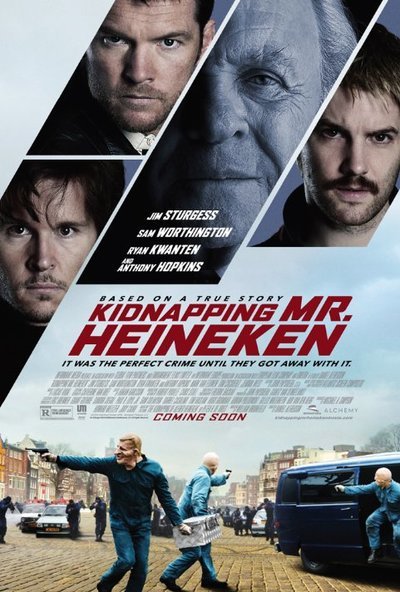