“Some people cry. Some people drink. Some people write shitty poetry. I hurt people.” With cutting breathiness and a signature no-nonsense attitude, these words are spoken by Lindy (Kate Beckinsale) early on in director Tanya Wexler’s “Jolt,” an action-packed, sci-fi adjacent dark comedy that leaves a lot to be desired in its neon-soaked wake.

A frantic and cold-to-the-touch film of anxious set pieces and paper-thin characters, “Jolt” tracks the misadventures of the abovementioned New Yorker, an unpredictably sturdy woman cursed with a rare neurological disorder that makes it impossible for her to manage her anger and control her violent impulses triggered by annoying strangers. Truth be told, some folks throughout the film—from frustrating man-spreaders on the subway to arrogant bigwigs rude to service staff—test one’s patience, and perhaps even deserve the kind bloody rage Lindy feels the urge to disseminate at various hours of any given day. But in order to function in a society and city where rudeness is often the norm or background noise at best, Lindy has no choice but indulge in the painful experimental treatment her mysterious, somewhat patronizing psychiatrist Dr. Munchin (Stanley Tucci) seems to have invented. “This is not a cure,” he keeps insisting to Lindy about the electroshock vest she is told to wear and activate with a push-button every time she feels the needs to beat the living daylights out of someone. But his warnings fall on deaf ears. Alone and hopeless, Lindy uses and abuses her daily allowance of the titular jolt liberally to impede herself (though Wexler still shows us in grim yet humorous detail the kind of violence Lindy longs for in her head), often necessitating an adjustment in the device’s dosage settings.

When the esoteric Justin (Jai Courtney) enters Lindy’s life as a blind date, one she first dismisses quickly but then warms up to, things start to look up for her. Could a chance at temporary courtship, even romance and marriage be in store for her? Unfortunately, Justin doesn’t stick around long enough for Lindy to find out. Falling victim to a shady murder scheme after a romantic night with Lindy and leaving her behind as the prime suspect, the high-powered lawyer exits the picture at once, setting off a pair of detectives—Laverne Cox’s fiercely proficient Nevin and Bobby Cannavale’s amusingly slack Vicars—on her tail. Armed with nothing other than a random set of physical skills and peculiar condition that makes her fearless, Lindy takes matters into her own hands to both clear her name and find Justin’s killers.

Not unlike David Leitch’s recent “Atomic Blonde,” “Jolt” takes discernible pride in its vibrant color palette, quick-witted cinematography, ostentatiously detailed production design (if you can forgive the film’s New York looking painfully set-designed and nothing like the actual city) as well as badass female lead unafraid to punch and combat her way forward. But it also suffers from debuting scribe Scott Wascha’s haphazardly written script—a bug that also put a mighty dent in the aforesaid Charlize Theron-starrer.

In that regard, “Jolt” unleashes a pair of unconvincing twists and turns during its final act, getting there by compellingly directed fight sequences that hint at the kind of scrappiness Wexler had previously shown with the likes of “Hysteria” and “Buffaloed.” But despite an obviously resourceful filmmaker at the helm and a more-than-game Beckinsale with proven genre chops, the film’s ultimately empty action bores more than it intrigues. So much that when the reveal that Wascha’s got up his sleeve finally arrives with the confidence of a thunderbolt, it fizzles at once, barely earning a shrug instead of the shudder it aims for. 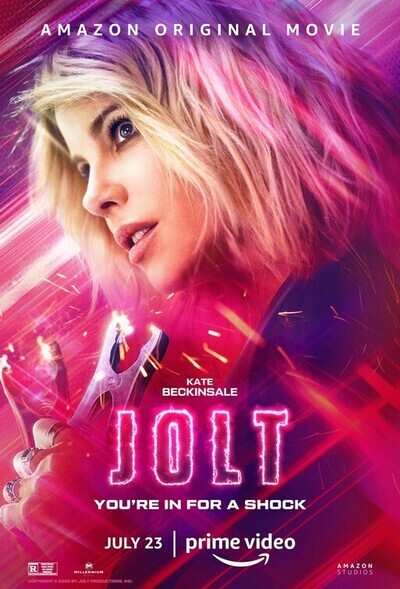 Rated R for strong violence, sexual content, and language throughout.

Susan Sarandon as Woman With No Name