The shrill and sanctimonious "John Doe: Vigilante" alternates between diatribes about the ineffectiveness of the justice system and gratuitous, gory clips of repeat offenders dying the brutal, bloody deaths they "deserve." These moments are tied together by a series of monotonous interviews and inauthentic television news reports.

This is supposed to be a thriller, by the way. It's more of a slog, not so much a whodunit as a whydunit—and by the end, it's: Who cares? The numbingly repetitive film from director Kelly Dolen and screenwriter Stephen M. Coates calls to mind the kind of rant you'd hear on AM talk radio—then reach for the dial to switch off as quickly as possible.

"Battlestar Galactica" star Jamie Bamber plays the title character: a handsome, self-styled vigilante killer who's on trial for murdering 33 people. On the eve of his verdict, he grants an exclusive interview in prison to smug investigative journalist Ken Rutherford (Lachy Hulme), a sort of Australian Geraldo Rivera. As he tells his story, "John Doe: Vigilante" skips around in time between his various crimes as well as the crimes his targets committed. Pedophile priests, date rapists, abusive husbands—all horrible people who've been convicted, sentenced and eventually released to enjoy a second chance, only to commit their crimes again.

John Doe hunts them down and takes them out, finishing the job the courts couldn't. "The world's a better place now," he tells his questioner defiantly. But he also acknowledges: "Killing's easy. It's the living with it that's the hard part." So he's conflicted, which is nice. It's a rare showing of emotional complexity in a film that has a firm stance on a polarizing topic.

We also see Rutherford interview several peripheral figures who found themselves caught up in the frenzy of John Doe's killing spree. Over-the-top online news reporter Sam Foley (Gary Abrahams) is all too happy to broadcast video of John Doe's gruesome deeds when Australia's television networks refuse to do so, and he serves as his self-appointed mouthpiece to the masses. "If you are a law-abiding citizen, then you have nothing to fear," he states dramatically into his microphone. "There is a method to John Doe's madness."

Another hanger-on, Murray Wills (Sam Parsonson), forms a group called Speak for the Dead to support John Doe as his celebrity grows, and he revels in a bit of his own cult of personality in the process. Soon there's an army of vigilante killers dressing just like John Doe in dark hoodies and masks, beating people to a pulp with baseball bats in the middle of the night.

These guys are red herrings—untrustworthy sorts positioned as possible co-conspirators. There is no mystery in "John Doe: Vigilante," no tension. This is no "Zodiac"—we know he's the serial killer from the very beginning. In theory, we're supposed to be on the hook to find out what inspired a seemingly intelligent, reasonable guy to commit such horrific acts. (We're also waiting to find out what his verdict is; the film teases it at the beginning, but then an explosion in the packed crowd outside the courthouse sends everything into a tizzy.)

It's all a dull, repetitive slog of talking heads saying the same thing over and over in slightly different ways, and it never picks up steam. Eventually, though, John Doe's motivations become clear once we see the videotape of his final victim—the man whose actions inspired his vigilantism in the first place. This pivotal scene in which he interrogates and tortures this man should be fraught with tension, but it just drags on and on. Once it airs live on the Internet, it's also supposedly the most-watched program ever broadcast, which is just laughable.

Dolen's film ends with a "Network"-esque call to action as our smooth anti-hero finally snaps, looking into the camera and screaming that we are all John Doe. Now where did I put that remote control …? *click* 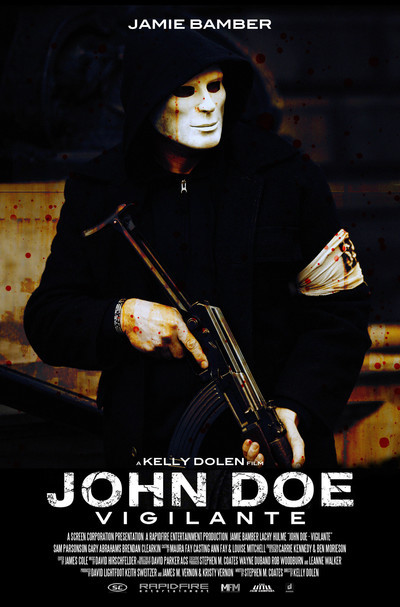