2001’s “Joe Dirt” didn’t make much of an impact when it was released. The comedy about a Southerner so clichéd that he had a mullet sewed to his skull was generally reviled by critics, but it did make back its meager budget, and then something interesting happened. Largely through regular cable airings, “Joe Dirt” built a fan base, and the film made that difficult leap from forgotten oddity to cult comedy. According to stories, it would trend so highly on Twitter when it aired on cable that people who make money off reviving projects like “Joe Dirt” took notice. And so star David Spade got the jug band back together in admittedly impressive numbers, hiring the original writer, Fred Wolf, to write and direct a sequel, and casting Brittany Daniel, Christopher Walken, Dennis Miller, Adam Beach, and more in returning roles. The result, “Joe Dirt 2: Beautiful Loser,” premieres on Sony’s web platform Crackle today. (The service is also available on a number of Blu-ray players and gaming consoles if you want to access it through your television.)

The unusual history of “Joe Dirt 2” makes it a tough film to review. If you’re one of those people who watched the original every time it was on cable (and found something to tweet about it), “Beautiful Loser” contains enough callbacks to the original to satisfy. Anyone else should probably look elsewhere for their comedy. “Joe Dirt 2” is wildly inconsistent, often feeling like it was slapped together quickly before someone changed their mind and put a stop payment on the financing check. Especially at the beginning, the tone of the film is often one of barely trying as you can see Spade and his cohorts practically winking at the camera and saying, “Can you believe this is happening?” Sometimes the cast doesn’t seem so sure it’s a real movie, and, especially for the first act, it feels like they shot everything in one take, and left them all in the movie. Maybe they were afraid to yell cut.

“Joe Dirt 2: Beautiful Loser” doesn’t just play on nostalgia for a 14-year-old comedy but for classic films of multiple generations, including references to “Back to the Future,” “Forrest Gump,” “Diner,” “The Silence of the Lambs” and “It’s a Wonderful Life.” It’s a hodge-podge of movie references, jokes about Southerners, surreal asides and lots and LOTS of physical humor—there’s a 15-minute bit about Joe’s balls. Halfway through, Dennis Miller says “This is Joe Dirt 2 and why have we overwritten this?” He makes a good point.

Even recapping the nonsensical, surreal plot is difficult. Joe Dirt (David Spade) sits on a bench, recounting to a stranger how he lost his wife (Brittany Daniel) and three daughters. The story starts simply enough, and with a bit of down-home charm in the narrative of a guy who “Went to the school of hard knocks and graduated with honors.” Dirt has a self-esteem issue, thinking his meager intelligence and professional aspirations will force him to lose his family. One day, his wife and daughters catch Joe’s fellow loggers taking turns farting on him (yes, you read that right), and Joe’s shame grows even stronger. When a twister literally sends him back in time, Joe has to fight his way back to his family.

From here, “Joe Dirt 2: Beautiful Loser” gets decidedly strange, and not in a creative, surreal way, but in a “first draft in which you put all of your ideas” way. I’m not the kind of person who thinks a film like “Joe Dirt 2” needs to fit together narratively, but it doesn’t feel like any effort to even try was expended here. And none of that would matter if it was simply funnier. There’s a line or two that works but they’re offset by dozens that fall flat (and an undercurrent of homophobic jokes don’t help). And what’s truly depressing is that Spade commits completely to the part. He’s more invested and engaged in this character than any other he plays in film. He just forgot to write enough jokes for this very-long comedy, or to cast interesting people opposite him—no, Mark McGrath does not count. Again, the biggest problem is that every joke goes on FOREVER. A bit in which Dirt meets a young Lynyrd Skynyrd might have been funny if it was 10-15 seconds. Instead it’s about 5 minutes. The whole movie operates under a “More is Funnier” principle, and we all know that’s just not true.

Despite its unique, unpredictable path to existence, in the end, “Joe Dirt 2: Beautiful Loser” falls victim to the regular traps of the comedy sequel. There’s a sense that comedians fall back on the chemistry of their ensemble and don’t put in the necessary effort to make an old joke sound new again. Although in this case, it may be a joke you’ve forgotten. 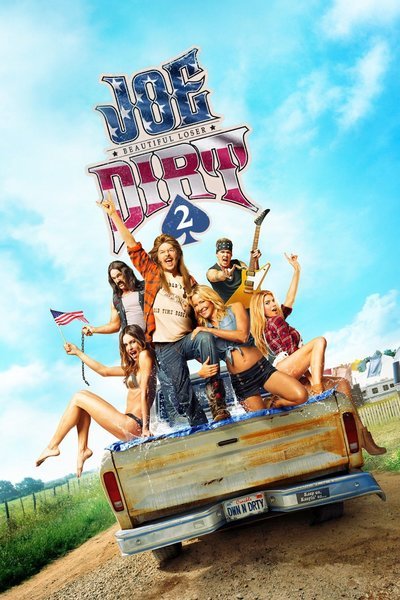