There’s a reason why micro-budget studios and filmmakers generally shy away from science-fiction films, and it's apparent based on the cheapjack opening scene of “Jiu Jitsu,” a new martial-arts/scifi hybrid whose posters emphasize the presence of co-stars Nicolas Cage and Tony Jaa. “Jiu Jitsu” wouldn’t seem to need a big budget, since it’s essentially an anemic “Predator” ripoff: a group of martial artists must fulfill their “destiny” and save humanity by beating up a sadistic warrior alien. But this movie opens with a comet—whose gaseous tail makes it look like it was put together on a budget of two plain, medium-sized Little Caesars pizzas and one Valpak coupon booklet—that streaks towards earth ... slowly ... very slowly ... it's coming. Suddenly, as if bored with the comet’s progress, the camera lurches towards a computer-generated Earth (also cheap).

We crash land in an unnamed jungle and hit the ground running with some guy (Alain Moussi) in an ill-fitting cloak. He is running while flying ninja stars, which also spark electricity, chase after him. Cloak-man seems more than capable of dodging these tacky-looking things just by running and moving around them. He also doesn’t seem to be in a great rush. Maybe he’s out for a jog—in the future.

In any case, Sweaty Guy is moving, he's dodging, he's gotten to the edge of the forest and lo, he's found a sunlit cliff, a climax that maybe reminds you of a similar scene from other films. But this is "Jiu Jitsu" and our guy is duty-bound to jump into the water, twisting around and "arrgh"-ing all the while, as if to compensate physically for the scene's other dramaturgic shortfalls. The opening credits play as Moussi’s character sinks underwater, now animated to look like a comic book (possibly using the comic book filter from a Macbook’s Photo Booth app?). He's sinking like James Bond, slowly, hands outstretched, body plummeting in slow-motion. What a rush.

If you think it took too long to get this far: boy, are you in for a rough sit with “Jiu Jitsu,” an action movie whose plot doesn’t really kick in until about 40 minutes into its generously padded 102-minute runtime. Until then, there’s a lot of throat-clearing about the real identity of Jungle Man, I mean Jake, an amnesiac who eventually discovers that he’s a member of the Jiu Jitsu order, and therefore is fated to spar with Brax (Ryan Tarran), a night-vision-and-invisibility-cloak-using space alien. Brax comes to earth once every six years using a portal that accompanies the above-mentioned comet. He can only be stopped by Jake and a crack team of Jiu Jitsu fighters, including Juju Chan, Frank Grillo, and Tony Jaa.

Nicolas Cage is also in “Jiu Jitsu,” though you can probably tell he’s not in it for long since he’s the final cast member listed in the introductory credits (the dreaded “and Nicolas Cage”). Cage plays Wylie, an appropriately Cage-y eccentric who lives in a cave, and resembles a Party Giant version of Dennis Hopper’s reclusive, self-styled head in “Apocalypse Now” thanks to his Ray-Ban shades, red headband, and tacky, pseudo-knowing dialogue, like “You look puzzled. Are you puzzled? I mean, I get it, I'm puzzled. I'm real puzzled.” If only: “Jiu Jitsu” is sadly exactly what it looks like, a timid, generic throwback that’s neither campy nor composed enough to be much fun. Even Cage’s scenes aren’t crazed and/or thrilling to warrant your attention: he pops up a few times, and teases viewers with mildly sassy one-liners, like when he pushes Jake into his favorite chair and says, “That's my favorite chair. I knew you'd find it comfortable.”

Moussi isn’t much more compelling as Jake, but he's at least credible during the movie’s flat and functional action scenes. (Possibly because he’s an accomplished stuntman.) Cage’s character also has a couple of fight scenes, but it’s obvious whenever co-writer/director Dimitri Logothetis cuts away from Cage and lets his body double take over. Moussi previously starred in Logothetis’ two recent “Kickboxer” reboots, as well as an upcoming sequel entitled “Kickboxer: Armageddon,” but he’s still not charismatic or confident enough to carry a picture. He didn’t really need to be in “Kickboxer: Retaliation,” the best of Logothetis’ recent cheapies, since that movie was full of celebrity cameos (Christopher Lambert!) and gonzo set pieces (punch that Icelandic strongman!).

By contrast, “Jiu Jitsu” is too disjointed and tame to be worth an impulse-rent; it's also too silly to be enjoyed with a straight face, and too lazy to be endearingly dopey, especially whenever Cage has to deliver exposition like “[Brax is] looking for a fight with you, the chosen Jiu Jitsu. If he doesn't get it, he stays, and he kills everything.” The makers of “Jiu Jitsu” should have gone full-“Sharknado” and admitted that they’re banking hard on Cage’s anything-goes image. Everything else in “Jiu Jitsu” is just a few rewrites away from self-parody.

Now available in theaters, on demand, and on digital platforms. 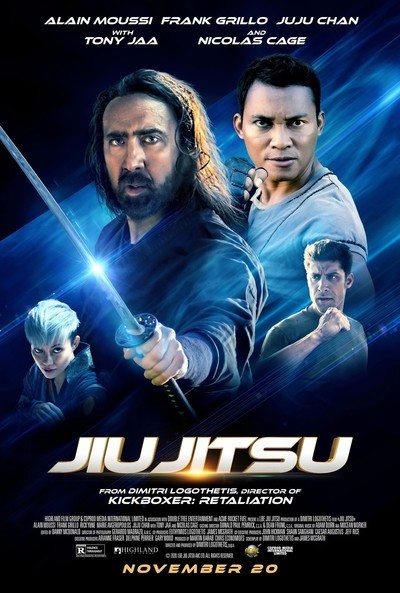 Rated R for violence throughout.