Variety, the show-biz bible, runs a one-line summary at the top of all its movie reviews. Reviewing Bette Midler's "Jinxed!," it simply reported: "Title says it all." Cruel, but appropriate. This is a messed-up movie that throws away what few opportunities it has to entertain us, and gets totally lost in a plot that starts as comedy and moves through farce on its way to paralysis.

The movie stars Bette Midler as a would-be Nevada lounge singer. She sings, indeed, in the movie's opening credits, and sings so well I was never able to understand for the rest of the movie why she was out of work. She lives in a mobile home with Rip Torn, a chronic gambler who dreams of making one big score. Suddenly, he hits a winning streak. He discovers that whenever he plays at blackjack table where Ken WahI is the dealer, he cannot lose. He makes impossible bets and pulls them off. Card-counting has nothing to do with it; he's got a jinx on Wahl.

Wahl leaves Reno for Lake Tahoe. Midler and Torn follow. WahI keeps getting fired because of Torn's winning. He's advised to put a jinx on his jinxer, and so he shadows Torn and finds out where he lives. Then, when Torn is away, he bursts in on Midler, they become lovers, and Midler tries to convince Wahl to kill Torn so they can collect on his life insurance and live happily ever after. Is this fast-moving enough for you?

Up to this point, "Jinxed!" has been mediocre, with flashes of humor. Now it starts to get really bad. Torn commits suicide before WahI can kill him. Wahl follows Midler's instructions and gets rid of the body in a staged drunk-driving accident, after about 15 awkward minutes of schlepping the corpse around. But then it turns out that Torn didn't leave an insurance policy -- just a trail of letters that Midler has to follow, as they lead from a used car dealer to a hooker to an old gold miner, on her way to what treasure she cannot imagine.

The last time I saw a plot like this was in "The All-Night Treasure Hunt," a Disney production. I think it was better the last time. All during the shooting of "Jinxed!," there were rumors that the movie was in script trouble, but who would have dreamed that the trouble was that they didn't have a script? The movie breaks into life, briefly, when Midler is singing, which she does in the opening credits and then again at a high school reunion (putting a nice spin on "Papa Loves Mambo"). But the movie's story is so stupefying that we just sit there, incredulous.

What is it with Midler? She proved long ago that she's a great singer, danger, comedienne and actress, on the stage. She was a great singer and actress in "The Rose," a drama. Then she made a wonderful concert film, "Divine Madness," which was a disappointment at the box office. Now this mess. Can't Midler and Hollywood figure out how to use her talent? Doesn't anybody realize it's time for a remake of "Easter Parade?" 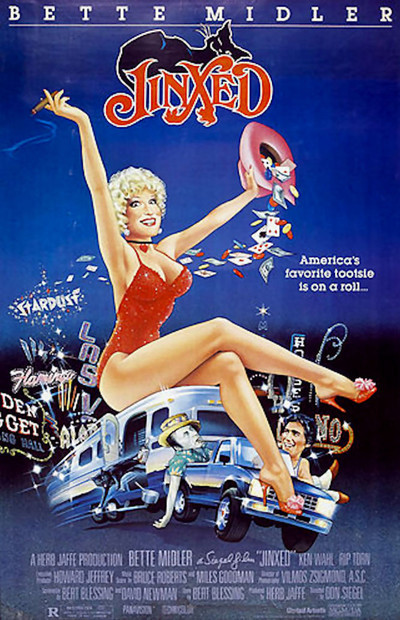